THEY ARE not yet finished college. Not all the members are yet in their twenties. They have only released a few singles and an EP, but Valeras are deservedly regarded as one of Britain's most exciting indie-guitar based bands.

Valeras - Rose Yagmur (lead vocals/bass ), Kat Beazley (guitar ), George Parnell (lead guitar ), Katie King (guitar ), Max Sealy (drums ) - are currently on their first headline tour of Britain and Ireland and play the upstairs bar of the Róisín Dubh on Wednesday February 27 at 9pm. “This will be our first time in Ireland,” Rose tells me, during our Tuesday morning interview.

The tour has already taken in Brighton, Coventry, Birmingham, Southampton, and a hometown show in Reading ("Every show has been amazing, but Reading takes the trophy,” Rose says, “there were so many people there, singing our songs back to us" ), while tonight is Sheffield, with the tour concluding with the Irish dates (Galway, Dublin, and Derry ).

Overall this tour acknowledges the band's growing reputation, building on the progress of the last two years, which saw support slots with The Wombats, The Amazons, Greta Van Fleet, Yonaka, King Nun, and Demob Happy; being featuring on Spotify’s The Rock List; and airplay from BBC Introducing and Radio 1’s Jack Saunders. “It’s quite shocking that all these things are happening,” says Rose, “but work hard and persevere and something will happen.”

To date, Valeras have released the singles ‘Ricochet (Nunca Morirá )’, ‘Intentions’, ‘Painkiller’, ‘Louder’, and the EP Knives & Flowers. While heavy, guitar driven, indie-rock is at the core of what they do, their music also reveals the influence of Latin America, jazz, R’n’B, and pop - diverse elements the quintet effortlessly fuse.

“It comes naturally,” says Rose. “It is rock by default as that is what we grew up on. In terms of everything else, I love R’n’B and D’Angelo. George is a massive jazz fan. We don’t think much about it in the writing process. We have music we love in our heads and that’s what comes out of us. What we hear in our heads is what we try and make.”

The Latin influence is from Rose herself, who is Venezuelan, while the band is named after a city in the west of that country. “I was born and raised in Caracas,” she says, the pride in her voice unmistakable. “We moved to England when I was 10. I liked the sound of Varela, though we’re not from there, but using it as the band name is a homage to home.” 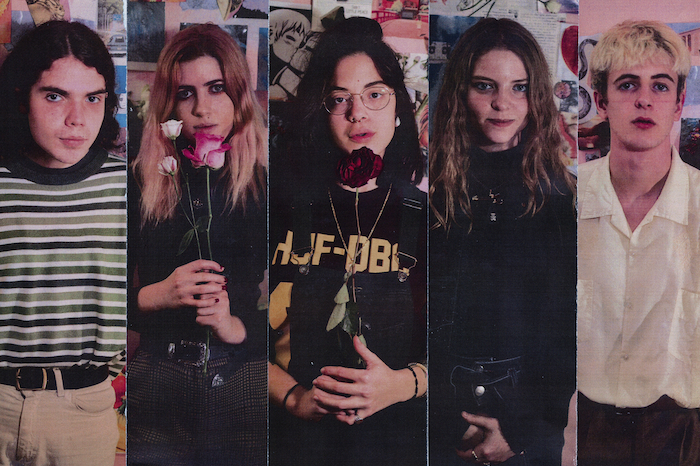 She is also understandably concerned by the crisis currently engulfing Venezuela. “A lot of my family are still there,” she says, “but even if they weren’t what is happening in Venezuela should concern everyone. It’s a part of the world not many pay attention to. People are dying of hunger and lack of medicine. That is not the country I grew up in. I want people to know about the real Venezuela, for its natural beauty, its mountains, its deserts. I hope people will come to know the country for what it is, and not what is going on at the moment.”

The band initially came together in 2013 at the Reading Rock Academy, when the members were aged from 12 to 14. They are still based in Reading, and praise the city as a supportive place to be a creative person in Britain. “Reading is a music based town,” declares Rose. “There is so much going on, so many bands, so many artists, there’s a lot of promoters putting on shows, there’s BBC Introducing every Wednesday, we have the festival here. There are lots of opportunities and we’re taking advantage of that.”

The tour ends 28 days ahead of Britain’s exit from the EU, and for touring British musicians, this is a worrying time, as the threat of a no deal Brexit could result in bands requiring work visas and need to have insurance and driving permits to tour in EU countries. No deal also threatens to result in tariffs being imposed on band merchandise - a main source of revenue for musicians today.

“No one knows what to expect or what will happen,” says Rose. "Festivals don’t know who will be able to travel or come. As a musician, it is worrying. You want to be able to go anywhere, play your music to anyone, and connect with people across borders. At the same time we hope it will all work out.”

Away from Brexit, and back to music making, Rose reveals that the band have been busy recording new material since the end of last year, and some of those songs are likely to be played in Galway. “We’re really excited to show people what we’re cooking up,” she says. “We have a new single coming out soon. I’m not going to say what it is yet, but we've been playing it live for a while and it’s got crazy, crazy reactions from the crowds.”

Despite the busy touring schedule, there is still the matter of college for some of the band members. Rose and Max are both students at the Academy of Contemporary Music. How do they balance being touring musicians with their studies? “It’s quite a good school for understanding that,” says Rose. “We do miss a lot of lectures, so sometimes you have to work on the road. I’ll take the laptop with me and I still manage to do the assignments on time.”