IN HIS poem 'The Allansford Pursuit', based on witches’ chants, Robert Graves wrote: "Oh, I shall go into the hare/With sorrow and sighing and mickle care/And I shall go in the Devil’s nam/Aye, till I be fetchèd hame."

These lines are adapted from a spell, related by 17th century Scottish witch Isobel Gowdie, who disclosed details of her witchcraft in a series of confessions. The lines testify to the widespread folk belief that hares could be changelings, and it is this strain of mythology and magic which imbues a captivating new exhibition in The Kenny Gallery by artist Éadaín, entitled Exitus – The Odyssey of a Hare.

The show opens tomorrow and traces the journey of an emblematic hare. The imagery is profuse with symbolism, while rich figurative oils, and very fine works in mixed media, reveal an artist at the height of her powers. Ahead of the exhibition’s opening, Éadaín met me to talk about the work and began by revealing why she was drawn to the hare as the talismanic focus of the show. 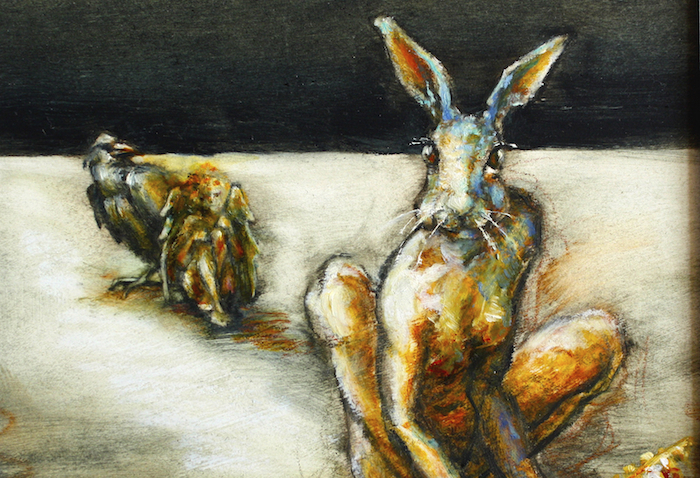 “I first became aware of the hare when I was living in rural Donegal some years ago and a hare used to come round the house,” she reveals. “I started reading up on the folklore of hares and discovered it is a mythological creature in all of the world’s main cultures. It has been with us since Palaeolithic times so it is a very ancient creature. It has been considered a kind of spirit creature.

"In the Celtic tradition it is represented as being able to convert into a woman, and the kind of woman who would have been burned as a witch, so maybe a strong, individual, perhaps unusual person. I am using it in the sense of our internal, mysterious, self, that part of us that is a bit wild and that we don’t fully understand. So it is emblematic of my inner self.” 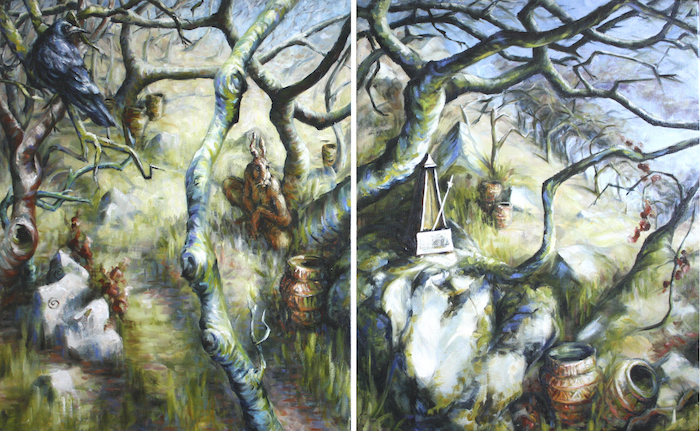 Born in Dublin, Éadaín now lives in Galway where she works as an artist and illustrator. She studied art in Galway, Dublin, and Italy and held her first solo exhibition in 1991. Since then her work has appeared in many solo and group exhibitions in Ireland and overseas. Her work is to be found in both public and private collections in Ireland and abroad. She works and teaches in a wide range of media including oils, watercolour, mixed media, and print. She also designed several Galway International Arts Festival posters in the early 2000s.

'I hope viewers can bring to it what they see. They don’t have to literally understand what it means personally to me. Anyone can read into the picture at whatever level they want'

I inquire whether the ‘odyssey’ of her new show’s title indicates there is a narrative running through the works. “There is a series of miniatures in the exhibition which does have a continuous narrative but overall the show doesn’t,” Éadaín replies. “I am using landscape as a vehicle to address issues of change both personal and universal; there are changes we have choice over and those we have no choice over at all. 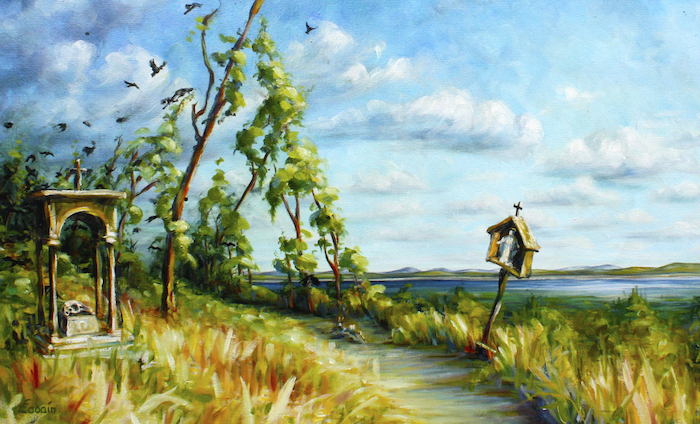 "There is the process of change where we leave what is familiar and go out into the unknown that involves a certain amount of fear but also the potential for growth. Or we can stay where we were living in confined spaces. So I am using symbol and allegory to explore these things within the landscape, both the external landscape and the internal psychic landscape.”

Several of the paintings feature a winged human figure in tandem with the hare. Éadaín explains its significance: “The winged human is another very interesting image that has been used for generations but I am using it as the idea of your higher consciousness or spirit self. The idea is that the hare is leaving a confined physical or mental space and is going out to return to its higher, true, self which is the winged creature and it is prepared to embrace that which is quite a daunting thing.” 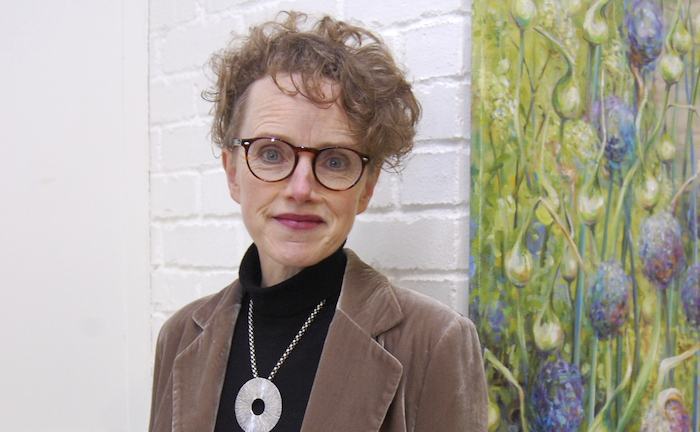 Éadaín stresses that the personal symbolism which infuses the work is no barrier to the viewers’ enjoyment of it. “I hope viewers can bring to it what they see. They don’t have to literally understand what it means personally to me," she says. "Anyone can read into the picture at whatever level they want; it works on a lot of levels and you can even just enjoy them as pictures without understanding any of that because they are figurative and work well as pictures, they are accessible images. I hope that people can engage with them on a personal level and find things in them that relates to themselves whatever they might be. The details of the Odyssey are mine but everyone has their own personal journey.”

Exitus – The Odyssey Of A Hare will be officially opened by Dr Felix Ó Murchadha, Dept of Philosophy, NUI Galway, at 2.30pm on Saturday February 9. The exhibition continues daily, Mondays to Saturdays, 9am to 5pm, until March 7. Admission is free and the paintings are available for sale.