DARK JOY are the most unlikely, yet uplifting, success story in Galway music. A classic rock/heavy metal band, they are an entirely studio bound creation, do not play live, and have no plans to either.

Despite this, Dark Joy - vocalist Declan Joyce; guitarist/producer Ray Diamond; and drummer Miki Belton - have released three albums, Darklings Dream (2016 ), Dark Joy II (2017 ), and Mirrors Of Darkness (2019 ); their videos have notched up thousands of plays on YouTube and Facebook; and their songs have been heard on radio stations across the world. As work begins on what should eventually become their fourth album, Declan and Ray talk to the Galway Advertiser about the band, beginning with its origins in a birthday present.

“My youngest daughter Meaghan had always heard me around the house singing songs I’d written myself,” Declan tells me. “It was coming up to my 50th birthday, and she wanted me to record something for it, so my family got me a voucher to record in Ray’s studio. Myself and Ray met up and we just hit it off immediately. We had great fun recording a song, my kids loved it, and all of a sudden they got me vouchers to make an album, and it’s just taken off from there.”

Ray Diamond is one of the best known names in Galway music, with his studio being a go-to place for musicians, among them Imelda May, Tracy Bruen, the ConTempo Quartet, Paper Moon, and others, to record, but what was the attraction to getting involved with Declan in Dark Joy? 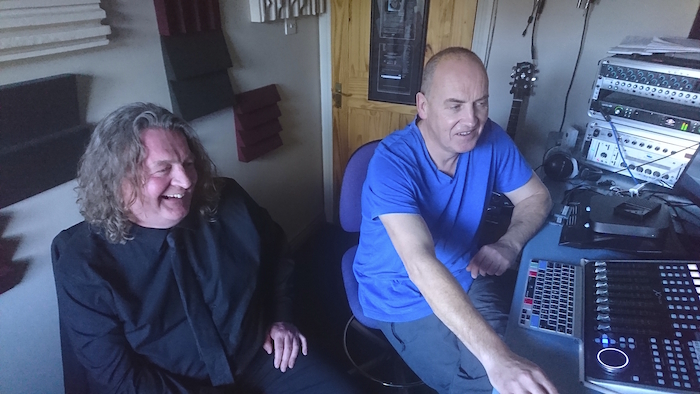 “My first love is rock - Jimi Hendrix, Led Zeppelin, Deep Purple, I learned to play guitar listening to Rory Gallagher, he’s my biggest inspiration,” he says. “In the studio it’s not very often you get people wanting to do classic rock, so Declan gave me the chance to take out the Les Paul guitars, get the Marshall Emulation pedal going, and start belting out riffs."

"Being in Dark Joy, it’s great fun, it’s a challenge, it’s a great release," Ray contiunes. "Also, working with different rock singers throughout the years, many of them have never had a passion to do original music, but Dark Joy has given me an opportunity to belt out riffs I’ve had stored up.”

Declan’s love of hard rock and metal was ignited during his teenage years in the 1970s when he discovered, first, Slade, and later, Black Sabbath, buying the band’s 1977 album, Greatest Hits from a friend for 50p. “The minute I put that album on, that was it!” he declares. “I didn’t want the music to stop.”

Over the years, Declan has also met some genuine rock legends. “I met David Coverdale [Deep Purple, Whitesnake] on Fleet Street in London. I’d been to the show the night before. He wanted to know what I thought of the gig. He gave me a handshake and I was very happy going home. I got 20 minutes with Ozzy Osbourne another time.” 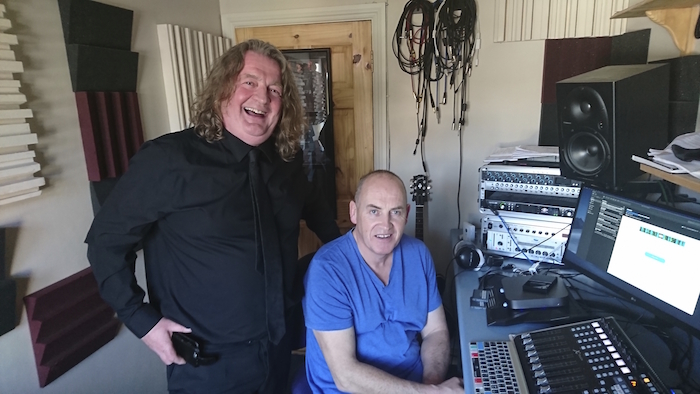 Declan, Ray, and Miki meet on Thursdays - or ‘Heavy Metal Thursdays’ as they like to call them - for three hours, emerging from that with a completed recording of a song. It was during such sessions that Mirrors Of Darkness was recorded. “I think this is the best of the three albums we’ve recorded,” says Ray. “I think the songs are really good and we gave the whole thing more time as well, Declan has improved as a singer.” Adds Declan, “It’s all about the song. Everything is about making that song as good as it can be.”

A particular highlight on the album is the Iron Maiden-esque ’Dark Times’, which ends with a thrilling guitar solo. “There was a friend of mine who suffered from an addiction,” says Declan, explaining the song’s origin. “I got this idea for a line, ‘Dark times are in your head’, and that’s something we all can have, every one of us goes through that. So when I came in to record it, I had this passion just to get it out, I had the melody in my head, and Ray pushed me on it, and it took off from there.” 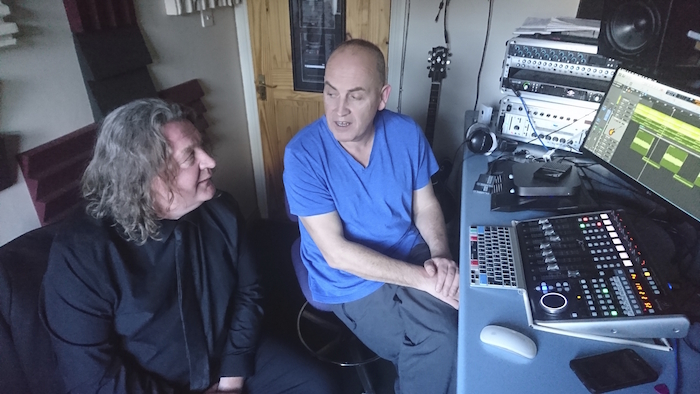 Ray’s solo is two separate guitar solos edited together, giving the impression of guitarists duelling it out. “We never envisage these songs being played live, so we take the opportunity to go over the top, so a lot of the time I might do duelling guitars as if it was two guitar players, left and right, with different sounds,” he says. “Most of the guitar solos are all first takes. The solo is usually the last thing we record on a track. Usually I’d put down a guide, as I’m more a ‘vibe’ player, rather than a technical player, and usually my first instinct is correct. Sometimes I’ve tried to do another take, trying to make it better, but the initial one always has the soul.”

The title track, which also opens the album, is another highlight. The video for the song was released just last week and is now close to 7,000 views. “We have six videos on YouTube and they’ve all been getting great views [‘Where Do We Go Now’ reached 24,000 while ‘Dogs Of War’ hit 42,000]. Coming to this album we thought, ‘We have to do more’, so Meaghan, who’s in film herself, recommended Matthew Blaney to make the videos for this album.

"With ‘Mirrors Of Darkness’ we wanted to create a scene, a story. We got a friend of Meaghan’s, Shannon, who had this fantastic devil costume she wore for Halloween, and I thought that would be really cool for the video. We got the idea for featuring poker tables from the line, ‘Who holds the aces controls everything’. In four days we got 6,500 views on YouTube and 36,000 on Facebook.”

As the trio begin work on the next album, they have the wind in their sails. “I got an email from a radio station in the US asking us for more music,” says Declan. “There are 25 radio stations worldwide playing us now, while on Spotify we’re getting listeners in South America, Iceland, and the continent.” Not bad at all for a band that exists only in the studio and online. As Ray and Declan say: “We’re doing this for the love of it.”

To listen to Dark Joy see YouTube, Facebook, Spotify, and CD Baby. The album is also available in [email protected]