FEET PLACED firmly in a pair of high heels, armed with a six-string acoustic guitar and a host of comedy songs, all wrapped in a sequinned dress, it can only be The Nualas, back in the ring for another swing, and ready to deliver a Glam Slam!

“The show is evolving, it gets funnier every year and the more we age,” declares Anne Gildea, before her fellow Nuala Susan Collins adds: “We get slower, but the material gets better. The heels are getting higher, but we’re crippled going around the stage. Sequinned Zimmer Frame - The Adjustment Show, that’s what we should call our next show.”

The Nualas - Anne, Susan, and Maria Tecce - bring Glam Slam! to the Róisín Dubh on Friday May 25 at 8pm, and though no strangers to Galway, this will be the trio’s first time headling the Dominick Street venue.

"We’ve never played a full show at the Róisín Dubh, we usually play the Town Hall,” Anne tells me, “and we’ve played the Vodafone Comedy Festival Galway, but this will be nice and intimate, and we have to praise Kevin Healy as well. He’s so sociable and always creates a wonderful atmosphere for the visiting comics, makes it very personable. We always enjoy it. And we have to mention Gerry Mallon. There wouldn’t be a comedy scene in Galway without those guys.”

The Nualas are aware of Galway’s greatest danger - its ability to permanently ensnare anyone who comes within its orbit. “The thing about playing Galway is, once you get there, you’re in real danger of never being able to get out of the place,” says Anne. “The last time we were there we stayed at a hotel with a thermal spa. There was a salt room as well for the salt therapy, not to mention the pepper room; I spent the whole time sneezing my way through that, and then we had the vinegar wrap and the turmeric rub. We left there looking like Oompa Loompas! I brought my boyfriend there. He enjoyed it though, particularly the tiled reclining chairs. He thought he was Captain Kirk on the Starship Enterprise!”

'At least one person after every show comes up afterwards and says ‘That was a tonic. I needed that.’ Doing something that gives people that kind of lift feels incredible'

Speaking of therapy retreats and the like, The Nualas will be focusing on mindfulness in Glam Slam! “You see, we’re really living ‘in the now’, we’re really here ‘in the moment’, us, you, and our manicurist,” says Anne. That said, the trio are more sceptical than convinced about the whole thing. “It’s all ridiculous,” says Sue. “Everywhere is telling us, we have to be more ‘mindful’, and every time I look at Facebook there’s some article telling me to practise mindfulness.”

“Yeah,” says Anne, “and the article is usually saying you shouldn’t be on Facebook, you should be ‘in the moment’ instead." "It’s a racket,” Susan continues. “I knew someone who spent three grand for a night of dancing around naked with handkerchiefs on a beach and ended up going home frozen, but telling herself ‘That was fantastic’, and I’m looking at her, going, ‘Would you not just go shopping instead?’ I always feel just as good when buying a new pair of shoes!" 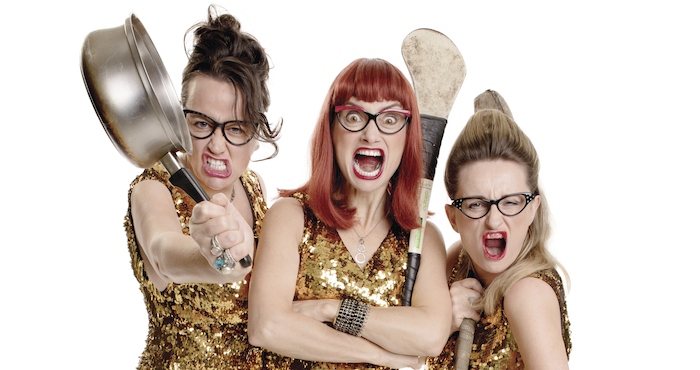 Yet, do The Nualas really need to practice mindfulness? After all, aren’t they a way of life, a philosophy in themselves? “Oh yes, the Nuala world view has been talked about many times over the the past 25 years,” declares Anne. “It’s a kind of sophisticated silliness.” Adds Sue: “It’s about getting the most relatable ideas and the most universal ideas and then Nuala-ising them.”

The Nualas have been a going concern since 1995, albeit with a break for a few years in the noughties, before they returned during a most opportune time…the recession. “It was crazy!” says Maria. “We came back in the middle of the recession, and it still worked! That’s testament to the brand. At least one person after every show comes up afterwards and says ‘That was a tonic. I needed that.’ Doing something that gives people that kind of lift feels incredible.”

'Someone said you’re saying what we’re afraid to say, there is something positive about that'

Anne ponders on how The Nualas have evolved from their nineties beginnings to now. “Since we’ve come back, and are older, we’re more down to earth,” she says. “When I look at the Facebook page, Oh My God, What A Complete Aisling! I think, ‘That’s what we were about.' It’s been interesting coming back into a different time, as we are different people. During The Nualas hiatus we did our own work in theatre, and solo, so we also came back as different performers. We were hoping for a positive reaction, but the audiences were fantastic. Thing is, there is not a lot of people coming up behind us, doing what we do, the trio format, there’s just us and Foil Arms & Hog. In that sense, it’s still original.”

And what continues to motivate The Nualas to take to the road and sing and make people laugh? “Mortgages, Bord Gais bills, car insurance, and the need to buy food, but it’s better than shelf stacking,” says Susan.

The Nualas and the Taoiseach

One of The Nualas' most popular songs during their comeback was the ‘Yummy Mummy Recession Blues’. In 2018 though, the chief crisis facing the State is accommodation, and it’s not a subject the trio shy away from.

“We’re working on a blues song, ‘The Mortgage Blues’, about a couple who split up, but still have to live together because they cannot afford to move out,” says Anne. “It’s about the ridiculous situation some people are facing because of the accommodation crisis, where they have to try and live separately, in the same house. It’s going down well at the shows as it’s such a recognisable situation.”

And what was this we heard about The Nualas taking up An Taoiseach Leo Varadkar’s advice that if you want a house, just go to the ‘Bank of Mum and Dad’? “Well we tried doing what Leo suggested, and asked his parents for money to buy a house, but they just told us to bugger off!” says Susan.

Glam Slam! also deals with ageing and the fear of turning into one’s mother. “I say we have to celebrate ourselves as women, and realise it’s a great time to be a woman,” says Sue, “and then I’m out shopping and am coming down the escalator, and I look across and see this other woman, also going down, and I start thinking, ‘Well she could do with losing a few pounds’, ‘That hair is getting awful brassy looking’, ‘She could do with getting a different cup size’, and then I realise I’m looking into a mirror alongside of the escalator, and the person I’m looking at is me!”

“Everybody does it. It’s just a thing about getting older - you don’t feel like the person you look on the outside,” says Anne, before Maria adds, “Yes, it’s like that moment you look at yourself and think, ‘Oh look! I’m turning into my mother!”

Still The Nualas have a way of imparting such experiences that audiences tend to find uplifting, or at least, find themselves laughing about - which is the point. “Someone said you’re saying what we’re afraid to say, there is something positive about that,” says Sue. Maria notes: “One of the first shows I did when I joined the Nualas, I remember we had a member of the audience tell us ‘It’s funny because it’s true.' We will leave the last word to Anne, and, are you listening Leo Varadkar? “We should be given Government bonds to cheer people up.” Indeed The Nualas should.

Tickets are available from www.roisindubh.net; the Ticket Desk at OMG Zhivago, Shop Street; and The Róisín Dubh.