THEREISBEAR! THEATRE Company revive their much-praised Sheridan Le Fanu adaptation, The Shadow of Carmilla - Scáth an tSúmaire, in An Taibhdhearc next week, bringing with it a generous dose of Halloween-season spooky chills.

ThereisBear! has reimagined Le Fanu’s horror classic Carmilla as an Irish narrative, setting it in the heart of post-famine Connemara. In the isolation of a dismal manor, the daughter of a landlord is bed-bound with a mysterious illness. Confined to the house by an unnatural storm, suspicion and unease fester among the few remaining inhabitants, culminating in the clash of languages, beliefs, and cultures.

The Shadow of Carmilla premiered at the Galway Theatre Festival in April where it proved a big hit and is a perfect play for this winter season revival. Ahead of its return director Conor Kennedy-Burke and cast-member Muireann Ní Raghallaigh talked with me about the show.

“We liked that it was a gothic horror genre and we wanted to see if that genre could be adapted for the stage because it is not often done,” Conor began, explaining the company’s choice of Le Fanu’s story. “We wanted to see can the atmosphere be sustained, that terrifying environment be captured and held throughout the performance. As well as that, in terms of the fact it was written by an Irish author who is often overlooked at the expense of those he went on to inspire like Bram Stoker, we wanted to give him his due and create something that would put his work in an Irish context, given his work is not often explored in that way.” 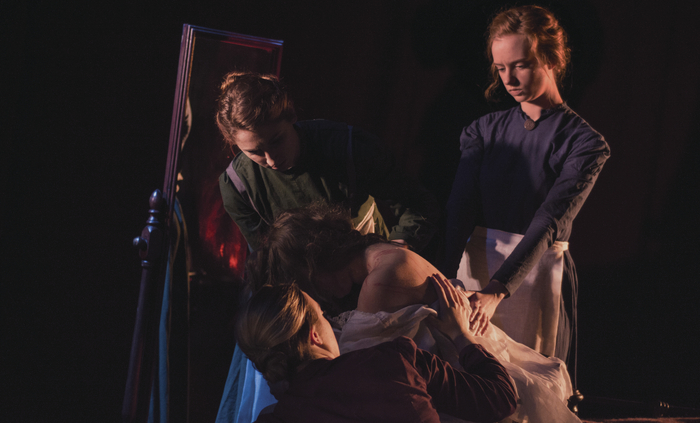 Le Fanu’s story is set in central Europe but Thereisbear relocate it to Ireland; “We moved it from its original Austrian setting to Connemara firstly because it was written by an Irish author,” Conor declares. “We also wanted to explore these creatures in terms of how they existed in the Irish psyche at the time and look at what the equivalent unknown would be in our culture.”

“Irish mythology and folklore had its own strange and ghostly and evil things,” Ní Raghallaigh adds. “You had creatures like the pookah and the banshee. We explored all those as we were developing this play. In the play they are talked about by the servants in the household reflecting the superstition of the time.”

Ní Raghallaigh tells me about the character she portrays in the play; “I play Cáit who is a servant and the only character who exclusively speaks Irish which is interesting – everyone else is bilingual except for the master. At the time you needed English for work but there were still people in Connemara without a word of English and being out of place in your own home is odd and was interesting to play because she both belongs and doesn’t belong.”

The show’s original run in April’s Galway Theatre Festival was much praised by playgoers for its gripping spooky atmosphere. Conor outlines how that was achieved; “We created a soundscaped atmosphere and by playing as much as possible the naturalism of the story so then the supernatural aspects seem even more heightened. As we were devising the show we also constantly had discussions about what scared us personally. We wanted to find a balance between something that was chilling rather than being a shock horror thing.

The Shadow of Carmilla - Scáth an tSúmaire runs in An Taibhdhearc on Friday November 3 and Saturday 4. Tickets (€15/€12 ) are available from An Taibhdhearc (antaibhdhearc.ticketsolve.com, 091 - 562024 ). See ThereisBear! Theatre on Facebook and Twitter.