THE BABORÓ International Arts Festival for Children gets underway in less than two weeks’ time and one of the must-see shows is The Peter Pan Experience by acclaimed Dutch company Het Laagland.

Het Laagland, whose name translates as ‘the lowland’, was formed in 2001 and the company creates theatre shows for the whole family. Under the wings of artistic director Inèz Derksen, her vision faithfully shaped by conceptual artist, writer and stage designer Bas Zuyderland, the company has acquired an international reputation for its work and garnered rave review from critics and audiences alike.

The Peter Pan Experience is a quirky, very funny and richly imaginative production that will delight viewers of all ages. It unfolds on a stage filled with nightstands and floor lights. This is Neverland, a twilight zone between dreaming and waking. Anything could happen here. Anything you can see or can imagine. If you are not able to do that anymore, your invisible host Peter Pan is there to help you to find it again. Five adults who have lost their imagination are dropped into Neverland where they experience the adventure of their lives.

Black ties become Indian feathers and the adults rediscover their sense of fun and dare once again to dream. Playfully they lose just enough ground under their feet to fly like Peter Pan who displays all kinds of tricks to give these adults a good dust-off. Visuals, music, singing, dancing and special effects all combine to conjure a truly magical 70 minutes of stage time.

Among the Het Laagland cast is Lennart Monaster and, ahead of the company’s Galway visit which is their first time performing in Ireland, he spoke with me about their work and the show.

“I first worked with the company about 12 years ago and have been with them exclusively for last five or six years,” he tells me. “We try always to make passionate stories for children and their parents by using everyday resources you can find around you. We try not to make shows like Hollywood blockbusters, our shows are real and alive and high energy with lots of humour but always with a solid layer of truth. We always try to put our own personal stories into our shows. We don’t play ourselves but we try to keep it close to our own feelings and experiences.”

The story of Peter Pan has inspired multiple spin-offs and other works on page, stage and screen. I ask Lennart why he thinks it has such an enduring appeal and is such a rich source of inspiration; “The Peter Pan feeling is something a lot of grown-ups kind of miss,” he replies. “Having the ability to fly off to another world and lose yourself in an imaginative story where everything is possible and adventures lurk around every corner. It’s all about the magical power of letting your mind run free which, unfortunately, is something we tend to lose over time as we grow older, that part of us shrinks. A lot of people feel that way which gives Peter Pan its power and the scope to tell other stories with it. 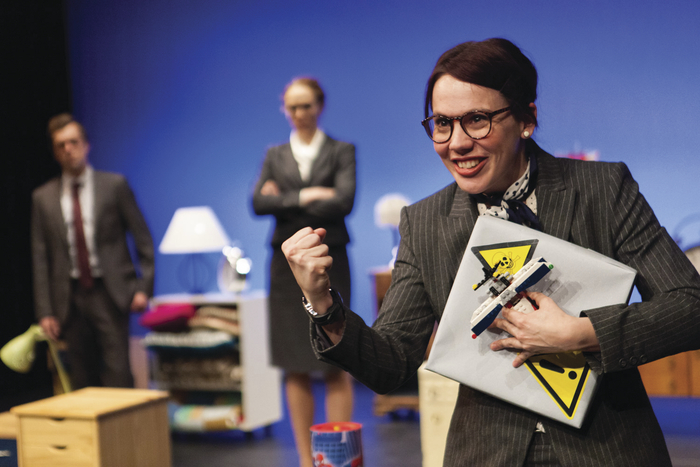 "Everything is possible in Neverland so you can do anything with the story because anything is possible. It’s a shame that in everyday life that grown-ups like your parents lose their magical ability because they get pre-occupied with what happens day to day which all feels important and weighty.”

Lennart goes on to give an outline of The Peter Pan Experience; “What we have done with the show is put five characters in a position where they are haunted by toys which jolt them out of their everyday lives. We created five very different characters, including a politician and two businesswomen – one who is young and ambitious trying to get up the career ladder and the other who is a psychologist who wants control over everything. We thought let’s let the toys bring them home until they discover what magic is still inside them.”

Whereas other Het Laagland shows have been largely scripted by Bas Zuyderland, The Peter Pan Experience was devised by the troupe as a whole, as Lennart explains; “We were all involved in creating this show; Buys did not write that much because most of it was created by us in rehearsal and a lot of it draws on our own personal stories and experiences. For example, one of our actors when he was young always wanted to be Little Red Riding Hood in the school play but he couldn’t because he was a boy so he had to play a tree instead.

"In our show we have swapped Little Red Riding Hood for Tinkerbell so that he finally gets to play the role. A lot of people, if you look for it, still have an imaginative wish, you still wish you were able to fly and you can in your imagination and a lot of the play is us using our imagination which is a lot of fun to do and to watch.”

Lennart’s ‘fun to watch’ comment is borne out by the rapturous audience reactions the show has received wherever it has been performed. “We have been performing The Peter Pan Experience for nearly three years now and we get amazing responses from audiences,” he enthuses. “This is the best ensemble of actors I’ve worked with and it is so much fun to do and you feel you have been playing with each other and the audiences, which is part of the reason we are still performing it.”

The show is directed by Inèz Derksen and, along with Lennart, the cast includes Aafke Buringh, Gijs Nollen, Folmer Overdiep and Anne Rats. Stage design is by Bas Zuyderland.

The Peter Pan Experience runs at the Black Box Theatre from Friday October 20 to Sunday 22. The show is for ages 7+. Tickets are €9 per person of €30 for a family ticket (four persons ) via the Town Hall Theatre on 091 - 569777 or www.tht.ie See also www.baboro.ie