Anyone strolling near Tig Cóilí pub or around the top of High Street, might one day encounter the inimitable Johnny Mullins playing guitar or accordion, and beguiling the passers-by with his sweet sounds. A true ‘auld stock’ Galwegian and fine multi-instrumentalist, Mullins has been a familiar and popular figure within the city’s music community for many years now.

“I grew up in Fursey Road in Shantalla,” Mullins tells me over an afternoon chat and coffee in the House Hotel. “My parents were both from Lettermullen so there was no English spoken in the house when we were growing up, it was all Irish. There were 13 children in our family altogether, though the older ones had moved away when I was small.”

I ask Johnny whether music was part of his family upbringing. “Before he moved to Galway, in the 1940s, my father, Sonny Thomais Mullins, was one of the most sought-after one-row box players around Lettermullen,” he replies. “They’d be looking for him to play weddings and everything. Every Saint Brigit’s Day he’d go from Lettermullen to Inish Mor to play on the island. He was an exceptional player. I did tape him once but I don’t know where the tape went!

"My mother was Maggie Mullin. They weren’t related, their surnames were just spelt similar. I remember when I was getting my green card to go to Boston the immigration officer said ‘Your father’s Mullins, your mother’s Mullin, you’re from Lettermullen. Is it a town of Mullens?’ A good few of us in the family either played the box or sang. It was in the blood.

"I always had an ear for music, even as a child. I’d pick up the harmonica or accordion and play them by ear. I’d be listening to Jim Reeves on the radio, anything at all. The only musical advice my father ever gave me was ‘don’t drag!’ meaning don’t be dragging the notes. I remember he used to play at the top of the street on Fursey Road on bonfire night, people would have their chairs out and himself and Mrs Lee would play their accordions.”

The day I met Marc Bolan

After leaving school and doing various jobs Johnnie went to London and worked as a barman and met some celebrity clients; “I got a job as barman at the BBC. I served T Rex one day, they were playing on Top Of The Pops; I remember Marc Bolan in his blue velvet suit. Another night I remember Eric Sykes ordering magnums of champagne.

Wilfred Brambell who played Steptoe in Steptoe and Son came in one day straight off the set and still wearing his scruffy costume. I didn’t know anything about the show and I said to somebody ‘I can’t believe he goes around dressed like that!’ Another day I had the newsreader Richard Baker in with me. He was a nervous wreck because he was being sent over to Northern Ireland and I was trying to comfort him telling him he’d be allright and no-one would harm him. I spent two or three years at the BBC then I headed off to Boston. I never wanted to be stuck in any job too long.” 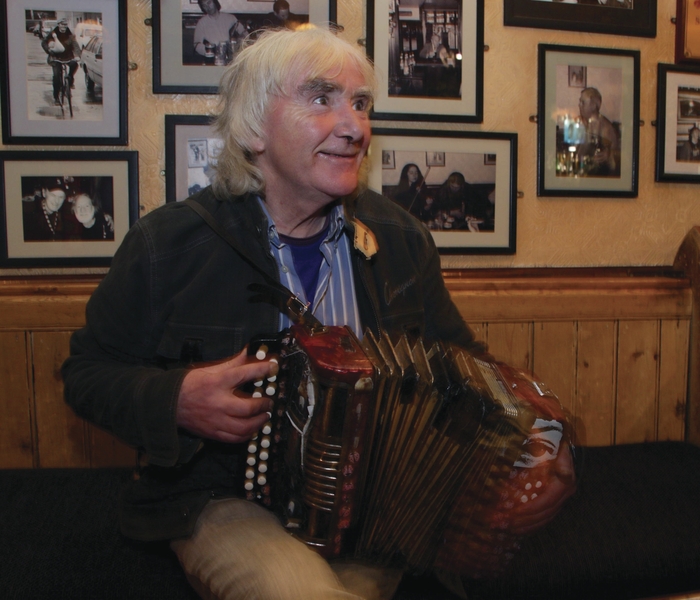 Johnny had played little or no music in London but began performing in Boston. “I was working as a painter when I went over but I was in the pub one day listening to some musicians and I thought ‘I play all those instruments I could be up there’, and that’s what happened but it took a few years for the penny to drop. We’d play all sorts across the range; trad, folk, The Eagles and I didn’t mind, it was all entertainment.

"I then came back to Galway when my father was dying. I left all my instruments behind me in Boston and I never went back. I left everything behind, bank account and everything. The instruments were put up in the attic and they got robbed but I wasn’t attached to anything. When I settled back here I played a regular slot in Taaffes for a few years but I never went looking for set gigs, I’m just happy to join in wherever. I’d see myself as an accompanist really.”

Last Christmas, Mullins assembled a delightful CD featuring a medley of local perfomers and a mix of familiar and original tunes and songs, several of which Mullins himself composed. “The CD is like a collage or snapshot of the people who play and sing on it. I didn’t mean it to be anything fancy but it’s nice for the people around the town to look back on,” Mullins observes.

There is a relaxed off-the-cuff easiness and intimacy about much of the album, and Mullins admits a number of the tracks were recorded spontaneously at sing-songs in people’s living rooms. Yet that imbues the proceedings with real warmth and easiness and the calibre of the performances throughout cannot be faulted.

One of Mullins’s own compositions is ‘Off the Ice Johnny Joyce’, a title which will strike a chord with older residents of Shantalla, as he explains; “When we were growing up in Shantalla, aged about 13 or 14, we’d put down ice all the way from the Sliding Rock to the door of Greg Cotter’s house; there were no cars at the time. The lads there like Colm McDonagh who were in the Army had hobnail boots and if you could get a pair of them, we were aged around 13/14, and you could swing and slide a girl with you. You’d shout that out meaning ‘clear the way’, you’d stoop down and grab the girl and twirl them around all the way down to Cotters.”

Mullins also does a charming version of Pachelbel’s Canon with accordions. “There must be a hundred versions of the Canon and I listened to them all,” he says. “I took the best out of them, the London Philharmonic were the only ones who go up on that bit at the end and for me that’s where it should go. I cherry-picked the ones that sounded best for me because the piece goes around and around.”

Aside from Mullins’ self-penned numbers (and his lovely air ‘Cloonkeen’ merits a mention ) other delights on the album include ‘Sammy’s Song’ with lyrics by Geraldine McDonagh and music by Gerry Mulholland, Joan Sullivan singing the old Jim Reeves spiritual ‘It’s No Secret’, Kevin Garvey’s ‘Madame’, Leasha Garvey singing the festive ‘Expect the Unexpected’, Risteard Mac Aodha’s jaunty ‘Dr James’ and Bernadette Mulligan on her own ‘Open Up Your Minds’.

“Bernadette came up to me outside Tigh Cóilí and said ‘Johnnie, I wrote this song’” Mullins reveals. “I listened to it and said I’d record it so I went out to her house and she did it. She was a great help to me when I was recording people, getting me and my instruments from point A to point B. She went out of her way to help, I’m very grateful to her.”

While this is the point where I’d normally say where one might purchase a copy of the CD, alas in this case Johnnie has already given away all the copies he made. “I don’t even have one spare copy!” he declaims throwing his hands to the air apologetically. However, you can find a number of the tracks on Youtube and, you might also be lucky and catch one or two of them being done live some fine day in Tig Cóilí."