Moods, Memories, and Mayo is the title of a new exhibition of paintings by Paul Guilfoyle which is currently running at the Kenny Gallery and continues until Friday December 23. It is Guilfoyle’s ninth solo show at the Kenny Gallery, a relationship that goes all the way back to 1993 and his debut exhibition, Looking West.

Despite the exhibition's name, Galway features strongly in these paintings, and the there are luminous representations of landscapes and waterscapes around Clifden, Roundstone, Leenane, and Oughterard, and even one Galway cityscape entitled ‘Night On Quay Street’.

Guilfoyle was born in Dublin in 1950, but in his youth spent many holidays in Mayo and Connemara. As an artist he has sought to evoke the beauty of these regions as well as oDonegal, the Midlands, and Kerry. His eye for capturing moving light, and the way it interacts with its environment, has given him a unique and highly identifiable style. His evocative canvasses are closely observed, refreshingly unsentimental, never sombre, and expressed with clarity and vigour.

His firm and clean handling of the paint captures magic moments and a real feeling for the dramatic effects of light on nature. His studies of trees in sunlight have an almost impressionist liveliness in their broken lights. In spite of the great geographical variation in his work, he has managed to preserve his individuality and highly identifiable style. He is a master of the bold and confident brushstroke.

Over a Friday morning phonecall, Guilfoyle chatted with me about his work and his new exhibition. I began by asking where his artistic impulse originated.

“My mother was very interested in art and I had a first cousin who was a very good landscape artist,” he replies. “He was some way older than me and he’s somebody I would have looked up to. Mostly it comes from when we were kids, we went to Lecanvey in Mayo on holiday and we’d spend four or five weeks there. It was there I really began to appreciate the landscape, and see the difference that sunlight made on a landscape that is essentially dark, so you get these moving spotlights of light passing across the land. This is very dramatic and I remember as a kid it made an impression on me, and when I was around 14 or 15 this became stronger.”

If his artistic sensibility began to stir in childhood, it was not until he was in his twenties that he actually started to paint. “It was only when I was 26 I started,” he recalls. “I remember going out to buy Christmas presents, I couldn’t find anything and ended up totally frustrated and bought oil paints for myself, which I had never even used before. My late start was kind of strange. The school I went to in Cork - we lived there for 10 years - didn’t do art. I was drawing all the time but never painted.”

Before picking up a brush Guilfoyle worked as a financial controller for an American company in Abbeyleix, where he still lives. It wasn’t long however before art supplanted accountancy.

“Fairly quickly I knew I really enjoyed it, for me it was a very good counter-balance to accountancy which could be kind of boring,” he says. “I did a lot of painting in the evenings and at the weekends and sometimes late into the night. Then, a few years later, the company I was with moved their Irish operation over to London and I decided to jump ship at that point. My paintings had been selling reasonably well so I just took the plunge. Kenny's gave me an exhibition within a year and things took off from there.”

Moods, Memories, and Mayo is his first show in Kenny’s in six years. "Six years of experimenting on different styles, techniques of painting, always returning to the real roots of why I paint, the landscape itself," he says. "Memories of the west, filtered through the years, led me into some of the works, into the moods of hill walks, sunsets, calm waters, billowing skies, distant light and flaring colours. ‘The Way Down’ with the calm, sunlit scene below is the memory of rain-lashed, wind-scoured walks descending through the clouds into a kinder place below. ‘Dún Briste at Downpatrick Head (Remembered )’, juxtaposes the headland against the sea stack from an imagined position on the cliff while ‘Autumn Dusk near Clifden’ emanates through a memory of still water and autumn hues. Autumn is the dominant season and mood of the show."

“The focus in all my paintings is light. I have no interest in painting grey landscapes, there has to be some lifting of the colours in it. What I was experimenting with were different techniques of putting the paint down, using both rougher and softer techniques. It always brought me back to the landscape itself. I can’t escape from that; there are many painters who can see a landscape and they can paint it in a way that it is not immediately obvious that it is a landscape or what the painter is doing, but for me the landscape is absolutely the primary thing. If I escaped towards abstraction I just wasn’t getting the same buzz from what I was doing. I keep going back. The landscape is 60/70 per cent of the painting for me.”

Many famous artists have recreated the landscapes of the west down the years. I ask Paul were any of them particular sources of inspiration for him. “I really like the work of Denis J McDowell because he also focused on the light,” he replies. “There was always some part of the painting that was lit which was very attractive. He would have been an influence.” 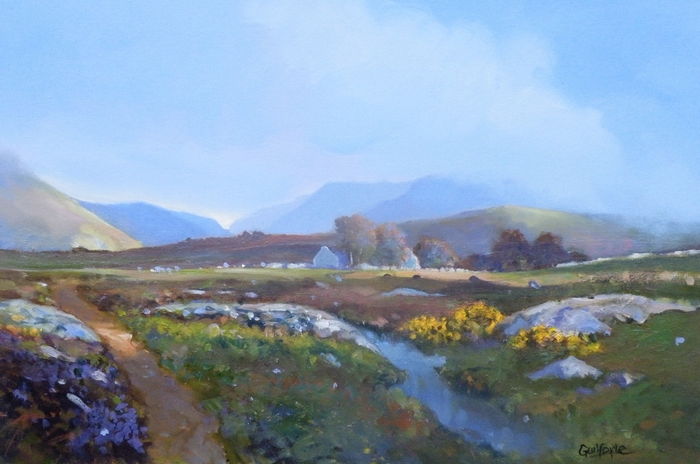 The great painter Turner was a prodigious walker as he explored the landscapes of England and Guilfoyle has been similarly tireless in traipsing the hills and dales of Ireland from Donegal to Dingle.

“I come from a family that always did a lot of hill-walking,” he explains. “I’ve also been blessed to be part of a group of hill-walkers who are crack navigators so what that means is I can go out and I don’t have to look at a compass or map, I can look around me and appreciate the landscape while these guys have got their noses in their compasses walking through clouds or whatever. It’s a great security to have guys like that with you. It means that I come back with a lot of memories of landscape.”

He enlarges upon the role of memory in his painting. “The thing with memories in the exhibition is that very often coming out of cloud, coming down off the mountains or just walking along lowland walks you get these views that almost burn themselves into your memory," he says. "They totally absorb you; all the colours, everything, comes into your head and that stays with you. So when you come to paint you want to bring some of this out but you’re painting from memory.

"With memory you can strip out all the things in the view that you didn’t like because you don’t register them anyway, they disappear. That’s quite an exciting way to paint because you have no reference point except in your head; you’ve no ‘hard copy’ as it were. It’s more difficult but it’s much more focusing in the end.

“For me there are moments of absolute total absorption in the landscape,” Paul concludes. “At times like that everything else of a disturbing nature in life disappears and it’s pure peacefulness, it really is, and while I’m not sure what spiritual means that would be pretty close to what I think it means.”