FRIDAY AUGUST 12 sees the opening of a dual exhibition at the 126 Gallery in Woodquay featuring the work of Shane Keisuke Berkery and Ruby Wallis. Entitled, With Each It Is Different and The Same, it sees Berkery and Wallis create a visual dialogue between painting and photography.

The two media have long challenged and inspired each other in the attempts to capture experience, and Shane and Ruby explore the tension between the two modes of image-making, between presence and distance, difference and similarity, seer and seen.

The exhibition features their collaborative response to a series of photographs of Shane’s grandfather, at work for Mitsubishi in Japan in the 1950s, as well as photographs from Ruby’s family archive in the 1990s. Their partnership emerges from a shared experience of migration - both moved to Ireland at the age of 14, Ruby from London and Shane from Japan, 17 years apart.

Tracing the effects of personal history, their individual work has reflected on the dilemmas of relocation and belonging. Their collaboration uses painting, photography, and film to explore the perceptual shifts between the exotic and the banal, document and fiction, history and the present moment.

Shane Berkery was born in Tokyo in 1992 to an Irish father and Japanese mother, and when he was just one-year-old, his family emigrated to the USA. They stayed in America for seven years, then went back to Japan where they lived for again, another seven years. The family then moved to Ireland, and now reside in Dublin. 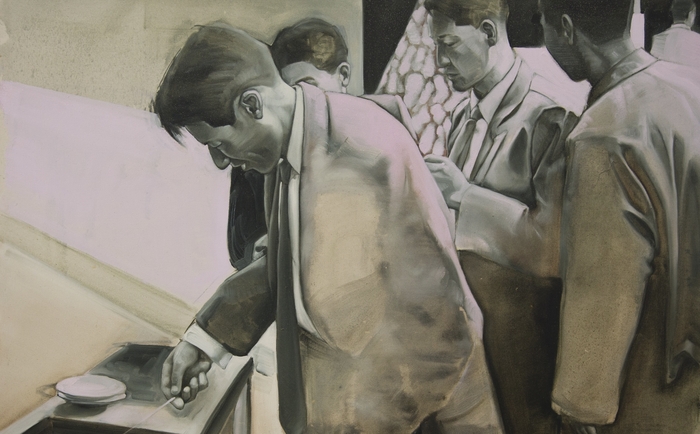 “In America I lived in Ohio and Virginia,” Berkery tells me. “Virginia was tough going, the school I went to was 80 per cent African-American so I stuck out. When we moved to Japan I went to a local public school. When I started there, the only Japanese I knew was from when my mum was talking to me as a baby. I wasn’t able to read or write and was thrown into that situation, but I picked it up relatively quickly.

"I was the first foreigner in the village, the first day I arrived the whole school came out and they all gathered around me. After a while I blended in a little bit better and I remember there was more freedom in Japan, kids were allowed to go out unsupervised and it was safer.”

Shane’s artistic activities started young, as he relates: “When we were in America my mum was studying architecture and she’d take me in to lectures and to her studio. She’d give me some pieces of wood and glue and paint and stuff and I’d go under her desk while she was working or into the corner using leftover materials and making things. When I was in second class in Japan I won first prize in an art competition. I was always pretty confident doing drawing and stuff.”

As Berkery grew, his interest in art and drawing became more serious; “The first time I ever said I wanted to do anything art related was when I was in Japan. I was reading manga comics and wanted to be a comic artist. Also I was influenced by old Japanese paintings on the walls of shrines. In Nara and Kyoto they have old shrines, there are paintings with gold leaf and depicting the god of lightning of wind and stuff. There is a big Buddha in Nara and I really liked that. I don’t know what artists influenced me but when I was young my mum got me a book of the complete collection of Picasso’s paintings and I looked at that a lot. In Ireland I only started doing art when I had to choose my course for the CAO.” 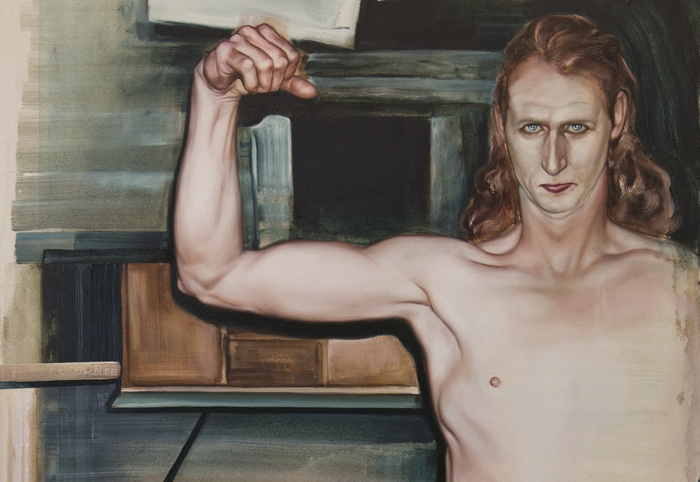 Discussing his deeply evocative paintings, Berkery has stated that his objective is to create an intense sense of presence in the depicted figure within each painting. He works large-scale so that the figure in the painting can be experienced as another presence in the room. His artistic aim, he has said, is "to create a strange nostalgic intermediate space between eastern and western memories".

“I often work from old family photographs, ones that my Japanese grandfather would have taken in the 1950s and 1960s,” he explains. “I look a lot like him so when I see the pictures there is a sort of false sense of nostalgia. I want to put the viewer in a spot where they feel they can relate, they feel something familiar but not familiar as well.”

The current exhibition was developed through the 126 Gallery’s 2×2 Project. This is a year-long series of collaborative residencies, exhibitions and a publication which interrogate the idea of collaboration between emerging and established artists. It is funded by the Arts Council project award.

Berkery reveals how he was selected to participate: “The board members of 126 went to the graduation shows of different colleges and they picked two graduates to do two separate programmes and they paired each of us up with an established artist. The idea was to work alongside them and make a show together. I was paired with Ruby Wallis who works with photography and film. For the month of April I had the studio and we met up and discussed ideas and were ‘vibing’ off each other’s work.

"Since I was painting old family photos she brought in some of her old family photos and I made one painting from that. She’s also taken a photo of me painting. It was my first time working alongside another artist like that; it’s good to see other people’s work that correlates to your own. I made four paintings while I was there and I am bringing down an extra two as well that are on the same theme.” 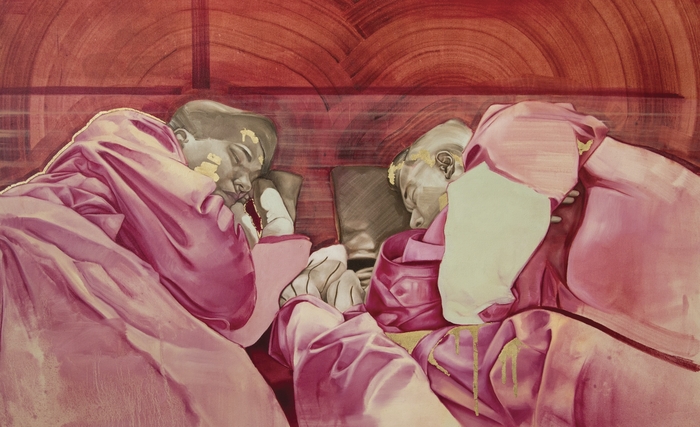 Last summer Berkery found his work making the news at his NCAD graduation show when he submitted a diptych depicting both himself and college director Declan McGonagle in the nude. Berkery painted the image as a “light-hearted” protest against how the college was being run. “I painted Declan because I was not happy with the college, and I painted myself as an equal. So I was putting myself through the same thing. I don’t want to ridicule Declan. I don’t want to bully him or anything,” he said at the time.

Following pressure from the college authorities Berkery withdrew the painting from the exhibition. The story made the national media amid accusations of censorship against NCAD. McGonagle himself kept aloof from the controversy at the time. I ask Shane did he ever make any personal response to him about the work?

“No actually," he says. "I did email him before the exhibition with the images and basically asked for his permission. His answer was pretty much ‘It’s up to you’, he was keeping out of it completely. I’ve passed by him in the college and he hasn’t mentioned anything. It was only dealt with through the administration of the college, not himself.”

As he prepares for the opening of With Each It Is Different and The Same, Berkery concludes “it’s hard for me to describe my art sometimes, my work is more about the experience, the process of painting as well as the viewing.”

Galway gallery goers will be well rewarded by experiencing and viewing this gifted young artist’s paintings, as well as the work of his show-collaborator Ruby Wallis. The exhibition continues until August 28.