GEORGE ORWELL’S first full-length book was Down and Out in Paris and London, his classic account of living on the breadline in France and England in the 1920s. More than 80 years after its publication in 1933, the book’s vivid portrayal of people struggling to survive from one day to the next has lost none of its power. Indeed, with homelessness again a headline-making issue, the book has gained fresh topicality.

Now Dublin actor Phelim Drew brings Down and Out in Paris and London to the stage in his own adaptation which comes to An Taibhdhearc as part of the Galway Theatre Festival. Drew, son of Dubliners’ legend Ronnie Drew, is one of our leading theatre actors with numerous appearances on the Abbey and Gate stages, as well as with most of the country’s foremost companies, adorning his CV.

“Orwell was someone my father turned me on to,” he tells me as he chats about the show. “I picked up Down and Out in Paris and London in an effort to read his lesser known - to me - books; I had read Animal Farm and 1984. I was totally blown away by how searingly honest a piece it is, it has so much humanity and an empathy for the underdog. Also, there is a lovely sense of humour in the book which isn’t so evident in Orwell’s later work. There so many wonderfully drawn characters, they just jump off the page. That’s what made me think of it as a potential show.”

Drew premiered the show, the first one he adapted himself, at last autumn’s Tiger Dublin Fringe Festival. “I had been tinkering with it on and off for a couple of years but every time I started working on it something else would come up,” he says. “Then Fishamble’s Gavin Kostick suggested I submit the idea to the Fringe which I did, and it was accepted and that’s what gave me the impetus to bring the project to fruition.”

I ask Phelim how he went about making Orwell’s story stage-worthy. “I wanted to be as respectful as possible to the source material and not leave out anything,” he replies. “It was a process of distillation until I got to the point where I had a through-line of the journey of the protagonist. People who have come to see it have told me you really get the feeling you are experiencing the book, because the show is very true to the book in terms of its chronology. In the book the Paris section is quite a bit larger than the English section and that is reflected in the play as well.” 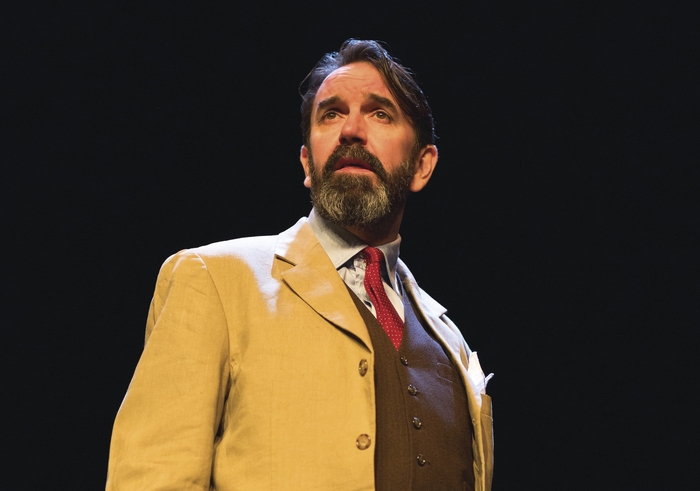 Phelim not only plays Orwell in the show but also many of the colourful personalities that enliven the book. “I haven’t counted the characters I play but within the first five minutes I’ve already started to describe, and hopefully inhabit, some of the characters that Orwell meets,” he reveals. “There’s this wonderful Russian ex-soldier, Boris, who is a larger than life character. The two of them sort of limp through life from one dead-end job to the next sharing baguettes and bottles of wine, basically getting through in a very bohemian way.

“There is a wonderful atmosphere in the book, and I try to evoke it in the show, of Parisian life in the late 1920s. The experience for Orwell was probably much more colourful than being down and out in the England of the same period. He describes England as being the land of the tea urn and the labour exchange whereas Paris is the land of the bistro and the sweatshop. That sums up the atmosphere of his experiences quite well.”

Down and Out in Paris and London is directed by Michael Toumey from the East 15 Acting School in Essex, an old friend of Phelim’s. “He was on his summer break and very kindly offered to come over and direct,” Phelim recalls. “I was very lucky he did because he did a fantastic job. He’s a wonderfully organic director, he takes what you offer and challenges you to go further, and in that way he was the perfect director for the piece.”

While Phelim has enjoyed a lengthy acting career this is his first time to take on the challenge of a one-man show. “I did Port Authority at the Town Hall with Decadent a couple of years ago which comprises monologues,” he recalls. “That was my first experience of being alone onstage even though there are three actors in that play. Giving a monologue onstage is quite daunting but it was good training for a one man show.

“I had an idea of the mental obstacles I would have to overcome to be onstage for a little over an hour on my own. I’ve enjoyed doing this show, it is very rewarding and wonderfully empowering doing a piece like this that you can take around to audiences. It’s been a great experience.”

Down and Out in Paris and London is at An Taibhdhearc on Wednesday May 6 and Thursday 7 at 8pm. For more information contact 091 - 562024 or email [email protected].