MALMÖ LIES at the very southwestern tip of Sweden’s Øresund strait. The nation’s third largest city, it is connected to the Danish capital Copenhagen via the massive, five mile long, Øresund Bridge. It is also home to many immigrant communities, mostly Middle Eastern and Eastern European, but among them is an Irishman, Richie Egan, better known as Jape.

Richie, who has been performing Jape as a solo act, and more recently as a band with the help of fellow Irish musician Glenn Keating, has won critical acclaim and public admiration over the last 10 years through the albums The Monkeys In The Zoo Have More Fun Than Me (2004 ), Ritual (2007 ), and Ocean Of Frequency (2011 ) - the latter two winning the Choice Music prize, making Richie the only artist to have won the award twice. Now Jape returns with his new album, This Chemical Sea.

“It’s the first album that sounds the way I wanted it to sound,” Richie tells me during our Monday afternoon interview. “In years to come it is the one I think will stand up, as I spent so much time working on it to get exactly the sound I wanted.”

Malmö has been Richie’s home for the past three years and he finds the city’s pace of life conducive to creativity. “It’s a lot quieter then Dublin, or even Galway,” he says. “Music-wise it’s smaller than Dublin, there are only 300,000 people living here. It’s not as hectic as in Ireland. Swedish people are more reserved than Irish people and don’t speak as much. That gives you a lot of time to think and reflect on what you want to do in your songwriting. There was time to get deeper into the songs and not too many distractions.

“My studio is 15/20 minute walk away. There isn’t too many people that I’d know so I wouldn’t get distracted on the way to the studio. In Ireland I’d meet someone every two minutes on the way and it would be ‘Ah let’s go for a coffee!’” So the album is a reflection on the character of the people of Sweden and the landscape. It was good to be exposed to that level of isolation and focus on the songs.”

Richie’s main reason for moving from Ireland to Sweden, though, was the birth of his daughter. “She’s the most amazing thing in the world,” he declares. “She’s nearly two years old, she’s walking and talking, and it’s just lovely to see her starting to open up to the world. Being a parent is a mind boggling experience. It’s not all sweetness and light, but it’s great to get her perspective on the world.”

She is also doing wonders for Richie’s attempts to get to learn the Swedish language. “I have enough to get around,” he says. “I can order a meal or order a coffee but if you wanted to have a philosophical conversation you’d lose me after about 10 or 15 seconds. I’m picking it up but not as much as I would like. The longer I’m here the more I feel ashamed of that. I am learning from my daughter, though. She’s speaking Swedish and English - I speak English to her - and I’m picking up Swedish from her as she develops her vocabulary.”

From guitar to electronics

Electronica has long been a feature of Richie’s music, pulsing as it does through such early songs as ‘Floating’, and becoming more notably present on Ritual and Ocean Of Frequency. Yet the dominant instrument has always been Richie’s folk-blues influenced guitar. This Chemical Sea reverses that, plunging the artist head first into a fully electronic sound and style.

“With this record I wanted a cohesive sound,” Richie says. “I didn’t want to do an acoustic record and everybody does guitar records. I wanted this one to have its own character and a certain energy, so I thought I would go fully electronic. I also find synths can emote in a way guitars cannot a lot of the time, and I wanted to make it sound emotional. There’s only guitar on one track.”

Pushing himself in a different musical direction also encouraged Richie to rethink his songwriting methods. “I tried to write songs on bass guitar,” he says. “Limiting yourself is sometimes good ‘cause if you give yourself too many options you’ll end up doing nothing. So it was synth, vocals, and bass, and ‘Let’s see where it goes from here.’” 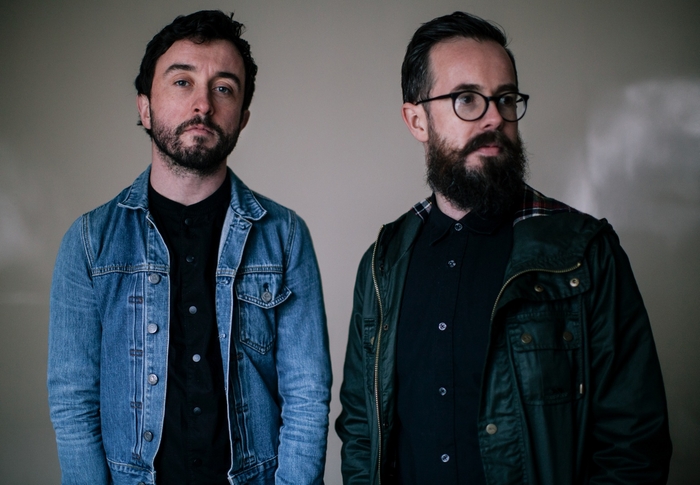 While Richie remains the leader, songwriter, and singer of Jape, the project has increasingly become a collaboration with Glenn Keating [pictured above, right]. “I can spend a lot of time on my own when I have a song and exhaust it by working on it too much, tampering with it, and losing perspective on what’s good and what’s bad to the detriment of the song,” Richie says. “With Glenn he’ll say ‘That’s good’, ‘That’s bad’ and help me move on with the track. He’s great.”

While The Monkeys In The Zoo... and Ritual had a ‘carpe diem’ urgency, Ocean Of Frequency was a gloomy, sometimes dour record, that made it a difficult listen. A strong strain of melancholy, and sometimes fear, runs though This Chemical Sea, but it is balanced by a qualities tranquillity, peacefulness, and sometimes hope.

“Thematically Ocean and This Chemical Sea are very different, but I couldn’t tell you why,” says Richie. “Whatever I write is from whatever subconscious place I’m in, but you not only change from year to year, you change from week to week, the songs on the new album feel real to me, so I knew I could keep them.”

One song from This Chemical Sea which has been attracting a lot of attention is ‘Ribbon Ribbon Ribbon’, Richie’s collaboration with Villagers’ Conor J O’Brien.

“That track wasn’t supposed to be on the album!” Richie says. “We wanted to do a couple of tracks together. The idea was that one of us would write a song and the other would come over and develop it. We had a great night making that track. When the mix of it came back I knew it had to be on the album. It’s always great to work with Conor. He’s a genius and an inspiration.”

With the album out, the next thing is to tour, and that includes a overdue return to the Róisín Dubh. “We’re looking forward to it as we haven’t played Galway in ages,” says Richie. “It’s been too long, too long.”

Jape play the Róisín Dubh on Friday February 20 at 9pm. Tickets are available at www.roisindubh.net, the Ticket Desk at OMG Zhivago, Shop Street, and The Róisín Dubh.