CHUTZPAH, RESTLESSNESS, imagination and no little skill across a range of disciplines have all played their part in photographer Reg Gordon’s eventful and varied career path.

An exhibition of Reg’s terrific portraits of notable Galwegians has just opened at the Town Hall Theatre and the show coincides with his latest venture, Artis4all.com, an online gallery of affordable artworks.

Prior to establishing himself as an outstanding photographer, Reg enjoyed stints as both a high-flying chef and a bicycle messenger in New York - not at the same time, I hasten to add.

“I went to New York in 1996 because I got a green card, I had no grand plans beyond that,” Reg tells me shortly before his Town Hall show opened. “I come from a catering background but my mother never wanted me to go into that career because it’s a hard life. However, I always had an interest in it and soon after arriving in New York I blagged my away into working at a restaurant. Within the first week I got sussed out but the chef must have taken a shine to me because he kept me on and trained me up to the extent that the next job I got was in a brilliant three-star restaurant. After that I was head chef in a couple of Irish bars. Then my daughter Mia was born and I didn’t want to be a chef anymore.

“The bicycle messenger job just showed up - it was something I always wanted to do because it is really living on the edge. I turned up at the front door of the messenger company with my bike and said I had done it before - I hadn’t! It’s still one of my favourite jobs; I was on the bike from eight in the morning ‘til six in the evening, five days a week. It wasn’t easy, I crashed the bike three times quite heavily and the last one put me in hospital.”

His next fateful career shift

It was around that time Reg’s wife Laurie bought him a camera, thus setting the scene for his next fateful career shift. “Laurie knew photography was something I was always interested in,” Reg reveals. “I was fascinated by it ever since I saw the work of Robert Capa, which just stunned me. Capa wasn’t a technically superb photographer but he had emotion. He also coined the phrase ‘If it’s not good enough, you’re not close enough.’ We came back to Ireland in 2001 and moved to Galway. Cheffing just didn’t do it for me anymore so I did a VTOS course in photography then picked up my camera and started knocking on doors. That was the start of photography as a career for me.”

It is a career that has seen Reg shoot models, movie stars, and world leaders, as well as doing work for some of Ireland’s leading brand-names. In 2011 he published Tribe – A Portrait of Galway, featuring striking images of some of the city’s best-known artists and artisans. The Town Hall show features a selection of portraits from the book. Among the personalities on view are Padraic Breathnach, Anne O’Maille, Harriet Leander, Mattie Hynes, Rod Goodall, Olaf Tyransen, and the Kennys taking a break from bookselling with a family paddle in Salthill.

I ask Reg whether he follows any set ground-rules when he is doing a portrait. “No, because if you do, then it’s not their portrait it’s your picture,” he replies. “The photo has to be about the subjects. That photograph of the Kennys is one of my favourites, it could be considered a snapshot but it’s them. That day we went to Salthill I had in the back of my head to do a pic of them paddling but they said no so we took a few shots at the diving board.

“As we were walking back I just asked ‘do you want to go into the sea?’ and it was the Kenny women who said ‘Yes’; once they did the men had to follow! For me, a portrait always has to be a collaboration. The hardest thing about portraits is that people are not always going to like them. If you do a landscape, everyone loves them but with portraits some people just don’t like their portraits which can make things very hard for a photographer.”

And what of Reg’s newest ‘baby’, artis4all.com? The idea behind the website is to make art more accessible for people to purchase, while not devaluing the art in any way. He is producing limited edition prints of selected artists’ works which makes it easier for people to own a piece of art. The plan is that the website will feature a different artist every two weeks.

“One of the hardest things about being an artist is that it is incredibly difficult to make a living from it,” Reg explains. “As a photographer I have my commercial work and most of my job is being told what to do, so when I go in and do a shoot it’s already mapped out for me. But if you want to be an artist you have to make something and hope someone sees it first of all and then hope that they are willing to buy it.

“The idea behind Artsis4all is that I take work by artists and put it on the web so that people can buy it. I want to be reasonable as well; each work costs €25 plus postage, it comes with a certificate of authenticity and is signed by the artist. Each print will be on high quality paper. 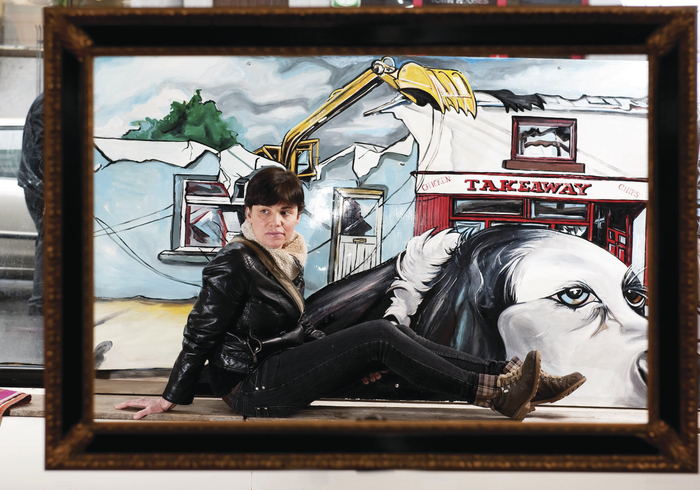 “The first artist featured is Margaret Nolan [photographed by Reg, above] because I love her work, it is so vivid and colourful. Joe Boske has also said he will be part of it and so have the two graffiti artists, Shane and Finbar. I’m not saying I’m an expert in art so in the near future there’ll be a committee to choose the participating artists. Most people appreciate it so if they see it and it’s a reasonable price believe that they will buy it. I hope it will work!”

If Reg’s other ventures are anything to go by, artis4all.com looks sure to be a success. Full details of how to order work from the website, and how to submit work for consideration can be found at http://www.artis4all.com. The exhibition of Reg’s photography runs at the Town Hall until Wednesday March 18.