Dark and audacious, Fisherman’s Blues, the rambunctious new novel from playwright, novelist, and screenwriter Mick Donnellan covers a myriad of genres from crime noir to comedy with an odd bit of religion for good measure.

The novel, written in a distinct west of Ireland vernacular, is fresh in its language, vivid in its descriptions, and sings with the signature style of all Donnellan’s previous work, and a bit more. Delving into the lives of drinkers, lovers, thieves, and scam artists, the story weaves a web of intrigue and curiosity that ends with an unforgettable bang.

Not without its poignant moments, the plot hinges on the chaotic, and often comical, consequences of three unlikely comrades’ attempts to finding their lost girlfriends, while unintentionally ruining the plans of a rising criminal’s efforts to take over the city. The question is: Can they succeed? And if they don’t, what then? And where have the women really gone?

The opening chapters of the novel bring us into a drink-sodden Galwegian milieu similar to that of Donnellan’s debut novel, El Niño. The protagonists, Jack and Chris, are both working on a fraudulent property scam and easing their fleeting pangs of guilt with copious intakes of booze and cigarettes. The cast of characters also includes some majorly bad-ass criminals and a seedy private detective while the locations feature many of Galway’s popular bars and eateries.

The story then takes a dramatic swerve when Jack’s and Chris’s girlfriends mysteriously disappear. Soon thereafter our unlikely heroes, along with the seedy detective, find themselves in an otherworldly parallel dimension - driving a 1994 Opel Astra no less - and caught up in a cosmic battle between the forces of Heaven and Hell as they try to rescue their loved ones.

“It was similar in a lot of ways to El Niño early on,” Donnellan tells me as he describes the novel’s gestation. “There were some ideas I wanted to explore in my fiction. I wanted to have something like an Irish version of Dante’s Inferno yet look at it in a comical way. I then got very interested in chaos theory and science and parallel universes so that all came together in the story.

“I was wondering where to go with the novel, it was at the point where it takes that swerve; the lads were around Galway having the craic and it was saturated in that drinking culture. I felt it was time for a dramatic change because otherwise it would have just been a fall-over-the-finish-line type of story so I decided to take a gamble on it and see where it went!”

Donnellan reveals that Fisherman’s Blues marks some notable developments on the template of his debut novel; “With El Niño I was writing crime noir under the influences of people like James Ellroy, Ken Bruen, and all these great crime writers. With this one I was trying to break away a little bit and explore my own voice as a fiction writer without abandoning those other things entirely. I wanted to get more into my own culture and my own west of Ireland dialect and explore that more.

“I think that would have come from my plays and seeing the effect they, and their language, had on people, and how people identified with them. I wanted to put that into my fiction and it’s there in the very first line of the book. Anyone from Galway or the west would recognise its local perspective whereas for somebody from an international background it would be like reading Irvine Welsh in that it gives a glimpse of a local dialect.”

The novel’s title, Fisherman’s Blues, is an obvious tribute to the iconic Waterboys’ recording from their much-feted sojourn in this part of the world.

“There are a lot of references throughout to the book to particular songs, some of the chapter-headings might allude to a song so it’s like an album in a way,” Donnellan states. “Fisherman’s Blues is the ultimate song really. I like the song and have listened to it a lot and I wanted to title the book after it, I felt it sang with the characters as well and the theme of this alternative universe, it just stuck and it became the name of the novel.”

From page to film screen 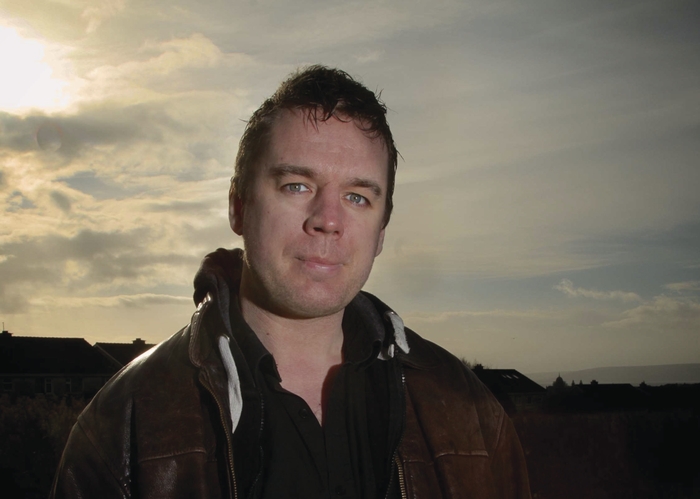 Mick Donnellan hails originally from Ballinrobe and now lives in Claregalway. He completed the MA in writing at NUIG in 2004 and completed his debut novel, El Niño, the following year though it was not published until 2012. In 2011, he established his own theatre company, Truman Town Theatre, for which he has written and directed five plays to date. The company made a hugely successful debut with Sunday Morning Coming Down, following it with Shortcut to Hallelujah, and Gun Metal Grey. These dramas eventually became known as the Ballinrobe Trilogy. The company then toured a fourth play, Velvet Revolution.

Earlier this year, Radio Luxembourg, Mick’s fifth play, was bought by London-based company, Story Film, and has been adapted for the screen. Its cinematic release is due in early 2015 and the cast will involve the best of new talent including Brian Gleeson, Damian Moloney, and Sofia Boutella. The title for the movie version will be Tiger Raid.

“I’m looking forward to Tiger Raid a lot,” Donnellan enthuses. “I was in Jordan in September where we had the shoot and I had a great time there. The actors and crew were very good and it’s very well shot. I saw some footage recently and it looks very sharp. It was a bit surreal to finally see it on screen like that but it’s all going very well.”

Donnellan also has a new play in the pipeline. “I’ve written a play called Nally which is based on the case back in 2004 where an isolated farmer, Padraig Nally, shot and killed a Traveller, John Ward,” he reveals. “The play is around that and around the issue of rural isolation. Nally has almost become a term in itself for rural isolation around the country. I was talking to a man in Clare a couple of weeks ago and he described himself as living in ‘Nally country’ because he was isolated. So it’s more about that isolation than the man himself, though his story is a touchstone for the play.”

In the meantime, readers can embark on the wild ride that is Fisherman’s Blues. The book is published by Original Writing Ltd and the cover is designed by Noreen Lydon. Copies are available from Charlie Byrne’s, Murphy’s of Ballinrobe, and Donnellan’s website, mickdonnellan.wordpress.com, with further outlets to be added shortly.