HAILED AS "a beautiful portrait of young Irish manhood," by the Sunday Independent, and a "one-man show whirlwind," by the Edinburgh Reporter, Philip Doherty’s acclaimed drama, Pilgrim, starring Rex Ryan, comes to the Town Hall next week.

Pilgrim is the hilarious and moving tale of a young Irishman on a journey home for the birth of his son. Christopher Reilly's flight from California is suddenly grounded in Newfoundland following the attack on the Twin Towers. Thousands of refugees from every culture and creed descend upon the doorsteps of Newfoundland villages like Gambo. In this surreal world, Christopher embarks on an odyssey of redemption that is both arresting and comic.

Ahead of Pilgrim’s Galway visit, author Philip Doherty spoke with me about the play and began by revealing that it originated in a true tale from a 9/11 traveller. “I used to work in a hotel bar and a Scottish guy living in the hotel told me how he was on a flight to the US on 9/11 which was re-directed to Newfoundland," he says. "They landed in this tiny airport along with other planes from all over the world.

"The passengers were kept on the plane for three days and when they finally got off, for security reasons, they couldn’t take any of their bags or clothes. They were put on buses and ferried to different parts of Newfoundland. He was in this little town along with lots of other people from all over the world whose flights had also been grounded. There were people sleeping in churches, community centres, on the floors of shops.

"It was like a surreal microcosm of the world. It was an amazing story and I remember thinking at the time ‘I have to write about that’. I was only starting to write at the time but I knew this was something I would come back to and eventually did with Pilgrim. The thing is there was no coverage of this story at the time so I was lucky to have that first-hand account.”

'I worked with Rex Ryan throughout the early drafts of the play, getting him to read parts, and so on, so it was a collaborative effort throughout'

Doherty outlines the character of Christy, the play’s eponymous pilgrim. “Christy is in California on a J1 visa and just wants to party and enjoy himself," he says. "While he’s there he learns that he got his girlfriend back in Ireland pregnant and he’s annoyed about it because it means he has to go home. Begrudgingly he gets on the plane and during the flight he’s thinking how he doesn’t want to be a father. Then his flight gets redirected to Newfoundland. While he’s there he goes through a lot and learns what it is to be a man and a father. The world that Christy sees changes, it comes into focus, and his appreciation for everyone around him evolves.”

Rex Ryan, who is the son of broadcaster Gerry Ryan, is widely regarded as one of today’s most exciting young Irish actors and Doherty wrote Pilgrim especially for him. “Rex was in a couple of my other plays before, Circle of Perseverance and The Birthday Man," says Doherty. "I’d been doing these big, sprawling, shows, with big casts, and lots of characters, and I wanted to do something more stripped back. 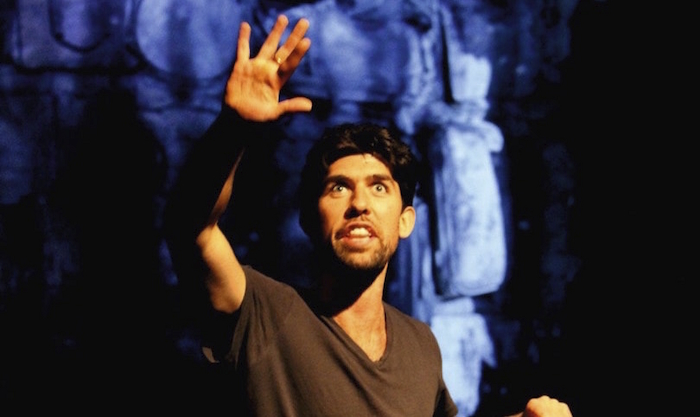 "Rex is a brilliant physical and comedic actor and an electrifying performer so I had him in mind while writing Pilgrim so the show is quite athletic and high energy. I worked with Rex throughout the early drafts of the play, getting him to read parts, and so on, so it was a collaborative effort throughout. Rex’s performance is electric and the response we have got has been overwhelming. Even though it is just a one man show he creates a whole world of characters and it is very funny as well as everything else.”

While Pilgrim explores Irish masculinity and Christy is, to begin with, a boorish misogynist, director Aoife Spillane-Hinks brought a wise feminine perspective to the story; “Aoife was wonderful in many different ways,” Doherty admits. “At the heart of the play there is a love story and Penny, Christy’s girlfriend back home, is a strong young woman. Aoife is a brilliant technical director and she was also very patient and understanding as we explored different avenues. There were things we were able to build from the original draft with her. She was a huge help, not only in directing Rex but also for me in realising the story and the character. We also had Tanya Dean as dramaturg so it was good to have two strong feminist women working on the project as well.”