Sinn Féin’s presidential candidate Liadh Ní Riada was in Galway last Friday as her campaign kicked off in earnest and she took time to sit down with me and chat about the race for the Áras and the issues that drive her political vision.

Ní Riada is the daughter of iconic Irish composer Seán Ó Riada, and though she was very young when he died, I ask if she feels she has been shaped in any way by his legacy. “I was just four when my father died and my mother died when I was 10,” she replies. “If I was imbued with my father’s legacy it was because he was my father and not the iconic figure that he represented through his music – and his music wasn’t just Mise Éire and The Battle of Aughrim; he wrote over 400 traditional arrangements and did jazz and classical pieces and Masses. As I was growing up I was aware of that.

"I don’t have many memories of him from when I was a small child and those that I do I guard them privately. I definitely grew up with that sense of legacy that he left and I listen to his music and that sense of pride his work has in what it means to be Irish. Definitely that Irishness and cultural identity is deep rooted, whether that was part of the DNA or the legacy, it’s just the way it was growing up, and growing up in the Ballyvourney Gaeltacht in Cork also gave me that unique sense of being Irish.”

Formerly a TV producer and director, and involved in the establishing of TG4, Ní Riada joined Sinn Féin in 2011 as the party’s National Gaeilge Officer. Three years later she was elected as MEP for Ireland South. “Gaeilge has always been important to me, it was my first language,” she declares. “I saw it as an injustice that Irish language speakers weren’t being given the same rights, the language wasn’t being treated equally. Becoming National Gaeilge Officer allowed me to have an influence on party policies regarding Irish language on a 32-county basis which fed into my own sense of republicanism. I was asked then would I stand as an MEP and that was a life changing experience. I didn’t know what kind of challenges it would bring but I absolutely took to it completely. I still love it; it’s always very different and you have a chance to look at global politics as well as local and national politics and I enjoy that very much.”

Ní Riada expands on her work as an MEP: “As an MEP I have 10 counties in my care and I engage with them on a very regular basis when I am not in Brussels or Strasbourg. You get great satisfaction when you do have ‘a win’ and can make life easier for those constituents in some way. When I’m in Brussels and Strasbourg it can sometimes seem like there is a disconnect in the European parliament because MEPs are not as much in the spotlight as TDs or local politicians, but I think that’s wrong because you’re at the front line. That’s where things start. We get to see what is coming down the tracks. We can inform people on the ground about being prepared, particularly in the light of Brexit. I was talking to the IFA last year as I’m co-ordinator on the budgets committee, and I was able to alert them that there was a planned cut in CAP funding of 15 per cent, which they didn’t believe at first, but I was proved right and they were then able to lobby on that issue.”

Mary Lou McDonald’s elevation to the leadership of Sinn Féin could be seen as ushering in a new era for the party where its dominant voices are not necessarily those from the North, though Ní Riada rejects a North/south view of her party’s dynamics. “I don’t categorise myself as being a southerner I categorise myself as being an Irishwoman. A North/south categorisation creates partition and I never understood partition; that’s not in my internal subconscious.” she asserts firmly. “I think we are now at a stage where we’re a more modern society than even seven years ago and the last presidential elections, as we’ve seen with the repeal of the Eighth Amendment and marriage equality.

'Once you enter the office you are president to safeguard the Constitution and that’s it, you have to be above party politics'

"Of course we have the problems of homelessness and the health service. We seem to have both extreme poverty and extreme wealth and not much middle ground. For me this campaign is about shaping the next seven years and creating our own history and writing a new chapter. I think we are at the stage where we can have mature discussions about a United Ireland and have that inclusivity where we include unionists and welcome diversity. Given that Brexit is very close, now is the time to prepare the ground for that because it could have political and constitutional consequences for us. I don’t think a United Ireland is out of the realm of possibility and we can talk about what kind of shared Ireland we want. If we keep going back we can’t go forward.” 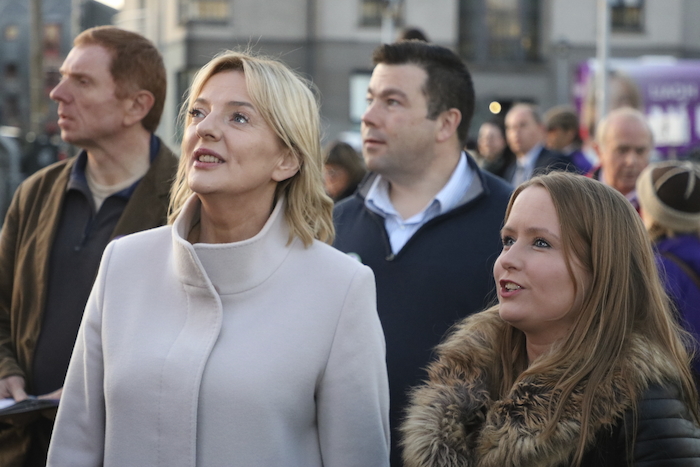 The pundits and the bookies have Michael D Higgins as the odds-on favourite to be re-elected but Ní Riada outlines why she still fancies her chances; “The media have their own angle but the ordinary people I relate to very well. I am one of them and I think it would be great to bring that ordinary element to the Áras. Mary Robinson and Mary McAleese were transformative presidents and made the office more accessible. I’d like to see that accessibility even more, and hold the Government to account and address them in the Oireachtas and the Seanad and to be that pulse or partner for the ordinary people.

"I have been elected to office already; 125,000 people gave me their first preference in 2014. They put their trust in me and I’ve delivered, I am consistently ranked as one of the hardest working MEPs in Ireland. Before I became an MEP pundits and bookies wouldn’t have given me much odds either so I don’t go by opinion polls but by the people I meet in the street.”

"Upholding our neutrality and sovereignty are big issues for me as well as language; I think our First Citizen should have Gaeilge so I’d be a big advocate of that. I’ve never spoken English in the European parliament in the plenary but I’d be above any party politics as President. It would be brilliant to have a president from the Gaeltacht. I think that would be fitting and about time for a woman from the Gaeltacht to represent all the people of Ireland in Áras an Uachtaráin.”

If that sentiment carries echoes of ‘Mise Éire’, who could deny its aptness for Ní Riada?