The Mai is a richly-woven story of four generations of women in one midlands family. At the centre of the household is The Mai, a 40-year-old woman torn between her wayward husband and her family’s happiness in a play that brims with passion and poetry, love and lyricism, heartache and hope.

First produced by the Abbey at the 1994 Dublin Theatre Festival, it comes to Galway in a production by Decadent theatre, directed by Andrew Flynn. The role of The Mai is taken by Derbhle Crotty, one of Ireland’s finest actors and one with a special affinity for the work of the play's author, Marina Carr.

Last week, the day after The Mai opened in Cork’s Everyman Theatre, Crotty took time out to chat with me about the play and her work. “It was great to finally put the play in front of an audience,” she declares of the previous night’s show. “They were very responsive and it is beautiful to finally hear the whole play. When you’re rehearsing you can become focused on small sections of it but you get the whole picture when it’s in front of an audience. They were pleased and we were pleased.” 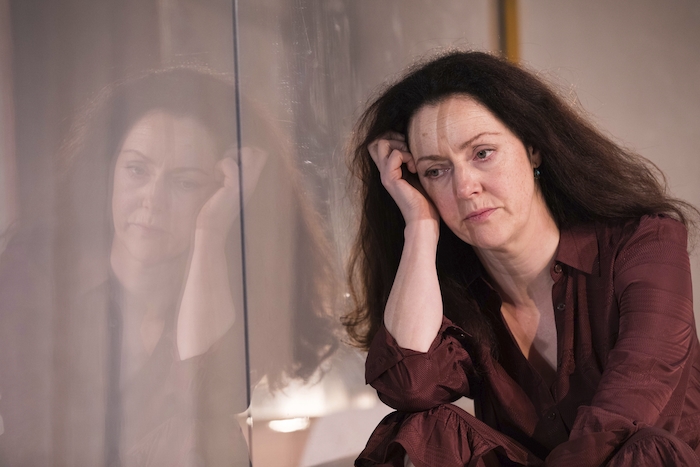 Twice winner of the Best Actress accolade at the Irish Theatre Awards, Crotty is an actor of great range and depth, whose compelling onstage presence has graced landmark productions of both new plays and classics by Druid, the Abbey, the RSC, and the English National Theatre. One of her first roles was in that first production of The Mai, in which she played the character of narrator/daughter Millie.

That play premiered on October 5 1994, so Crotty will mark its anniversary performing it again in the Town Hall. “I have very warm memories of that production,” she tells me. “It is bathed in a golden light for me. I remember I was healthily obsessed with Joan O’Hara who was just great in it as the hundred-year-old opium-smoking Grandma Fraoichlain. Joan O’Hara up close and uncensored was some experience!”

In conversation, Crotty exudes the same lively intelligence that animates her performances. Her voice carries traces of her native Cavan accent and her remarks are occasionally punctuated by warm shafts of laughter.

Marina Carr’s plays have been a recurrent thread throughout Crotty’s 25 year career; after The Mai she featured in Portia Coughlan (1996 ), Marble (2009 ), Hecuba (2015 ) and Anna Karenina (2016 ). In a well-received speech Crotty delivered at the Waking the Feminists gathering in the Abbey in 2015, she reflected on how theatre had enabled her to express and explore her own "contrary, turbulent and passionate nature", and it is striking that those words could be applied to many of Carr’s women. 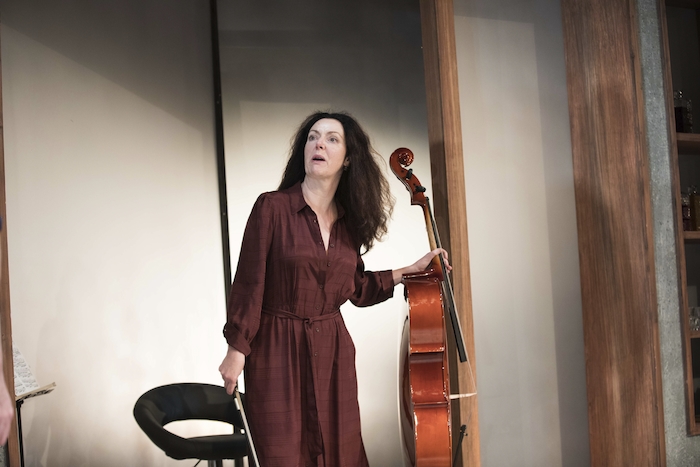 Crotty readily admits that Carr is a writer for whom she feels a great affinity. “Marina is monstrously talented and that’s not even the best thing I to say about her,” Crotty declares. “She amazes me and as a writer she really speaks to me. There is nothing at all of sentimentality about her. I think those things I said about my own nature are about right. In The Mai there are four generations of women and things are not easy between them they have to fight through their own natures to get to each other, as we all do. Nothing is tied up neatly; it’s an ongoing generational war with occasional outbreaks of unity.”

Some people might argue that the Mai’s philandering husband Robert is unworthy of the fierce love she feels for him; “You might say that but I couldn’t possibly comment,” Crotty observes wryly. “You can say that to love a person so unconditionally is a weakness and it is her undoing. It’s her Achilles heel but it is also as central to her as anything else; it’s as central as her determination to succeed despite the odds, to give her children much more than a decent life, to make things beautiful in her world, it’s part of that. It can’t be separated from that.”

Given that she spoke so eloquently at the Waking the Feminists gathering, I ask Crotty if she has discerned a change in attitude in the theatre world about gender balance since then? “There has definitely been a change in the sense that once you see something you can’t unsee it,” she observes. “Now that women have spoken, Waking The Feminists is a powerful movement that everybody is aware of. I don’t think anyone can approach anything without having as a consideration the presence of women, the representation of women, just the numbers as much as anything. 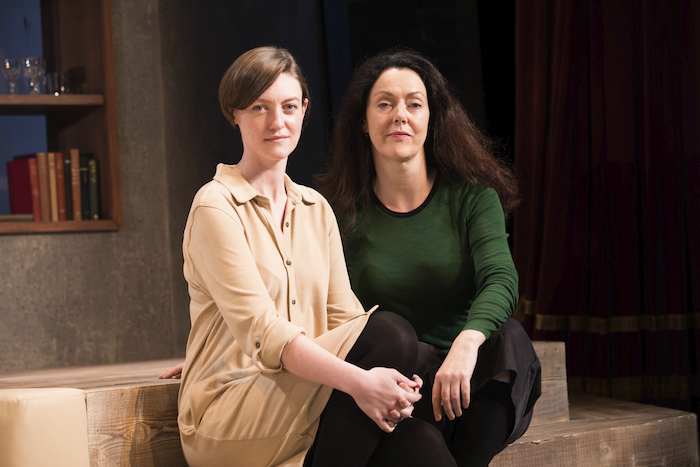 "Waking The Feminists represented all sorts of different opinions and I’m not involved with streamlining policy so I don’t know how all of that is going to work. Honestly, I scratch my head a bit as to how things like gender quotas regarding actors could be imposed. Druid were before their time because they had planned to do gender-blind casting of DruidShakespeare before Waking The Feminsts and it was wonderful that that production addressed it so quickly and successfully. But I haven’t really seen it tackled in such a vigorous way since.

"Ruth Negga is about to play Hamlet at the Gate but I don’t think there are any other gender-blind casting in that show. There is lots of talk and lots of people signing up to aspirational papers but I’m not seeing it working in practice in terms of women on the stage. It is knotty and difficult to implement but I am hoping that over the years we will see a real engagement with that.”

'The Mai is a play that is at times, enormously witty and outrageous. It takes no prisoners; it is a muscular assault of a play in ways'

Crotty’s terrific performance in DruidShakespeare as Bolingbroke/Henry IV was one of the roles which secured her The Irish Times Best Actress Award. She has also taken leading Shakespearean roles with the RSC and the English National Theatre. How would she compare doing Shakespeare in England and Ireland? “I think Irish actors act more with their whole body,” she says. “There can sometimes be a tendency with venerable British productions that they are very spoken and I thought Druid’s approach was really from the gut and very strongly physically manifested. British actors can be technically brilliant and that is something that I would like to see us owning more, technical ability.

"DruidShakespeare was fully embodied and it had great push and energy. Even though we were performing four plays in seven and a half hours and it had that highly energised input and urgency. You could say that is a hallmark of Druid. It was seriously enjoyable show to do, another golden memory.” 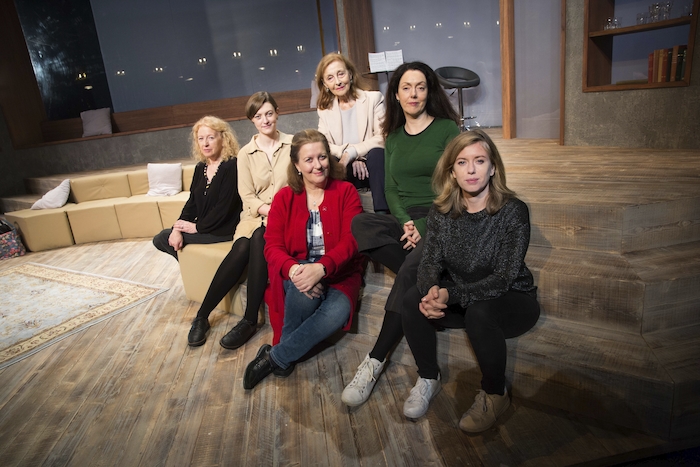 Crotty’s doorway to an acting career commenced when she was at UCD when she became active in the university's drama society. Before university there was one memorable theatrical visit which gave a taste of things to come. “I didn’t go to plays growing up because there wasn’t much available around Cavan,” she recalls. “ However, I did go to Dublin when I was about 15 with my school to see Ulick O’Connor’s play The Execution in The Peacock and I was hugely taken with it. I remember coming home on the minibus I stood up near the front and replayed the play for nearly the whole journey back to Cavan. That play was an exciting experience and gave me a great thirst for theatre.”

Crotty concludes our absorbing chat with some final thoughts on The Mai; “It is a play that is at times, enormously witty and outrageous. It takes no prisoners; it is a muscular assault of a play in ways. I could make a comparison with Synge in that it is highly poetic, coruscatingly funny and it reaches for the stars and encapsulates a real tragedy.”

The Mai comes to the Town Hall Theatre from Thursday October 4 to Saturday 6. For tickets contact 091 - 569777 or www.tht.ie