"AND DEATH shall have no dominion’ Dylan Thomas once wrote, though if he had been at GIAF 2018 he may have revised that opinion. Death was a major theme of Incantata, The Aspirations of Daise Morrow, Gardens Speak, Orfeo ed Euridice, and Wit, while characters also died in the course of Baoite, Flight, and Class, with a hint of suicide in Shelter for good measure.

As well as their focus on mortality, Incantata and Daise Morrow were also both literary adaptations, the former from Paul Muldoon’s long poem and the latter from Patrick White’s short story.

Incantata was a bold choice as GIAF’s centre-piece stage show; Muldoon’s poem, with its many literary and artistic references, is not the kind of work you breeze through on one reading. However director Sam Yates, actor Stanley Townsend in a terrific performance, composer Teho Theardo, and design team of Jack Phelan, Rosanna Vize, Paul Keogan, and Sinead Diskin together imbued Muldoon’s words with a vibrant stage life, even if occasionally there were more ‘bells and whistles’ effects-wise than required.

The production vividly dramatised how the poem is not just about grief for a lost love, but about the creative process itself, with Townsend’s character as both poem-composer and print-maker fusing the personae of both Muldoon and the poem’s inspiration, artist Mary Farl Powers. This staging of Incantata offered much to admire though those who went to the show without knowing the poem would have surely struggled to catch all its allusions.

Similarly, The Aspirations of Daise Morrow, from Australia’s Brink Production, never fully escaped its origin as a piece of prose, for all the pleasures of its staging. The play revolved around the funeral of the eponymous Daise Morrow and portrayed the various mourners and their inter-relationships. Performed on an earthen floor beneath a canopy, and with the Zephyr string quartet playing a gorgeous live score to complement the show’s four actors (Paul Blackwell, Lucy Lehmann, Kris McQuade, and James Smith ), director Chris Drummond’s production had much to enjoy. White’s lyrical, insightful, prose was as much a glowing affirmation of life and love, often shot through with warm humour, as a meditation on death, and the cast played multiple roles with fluent ease. That said, it still felt like an illustrated story rather than a fully achieved piece of drama. 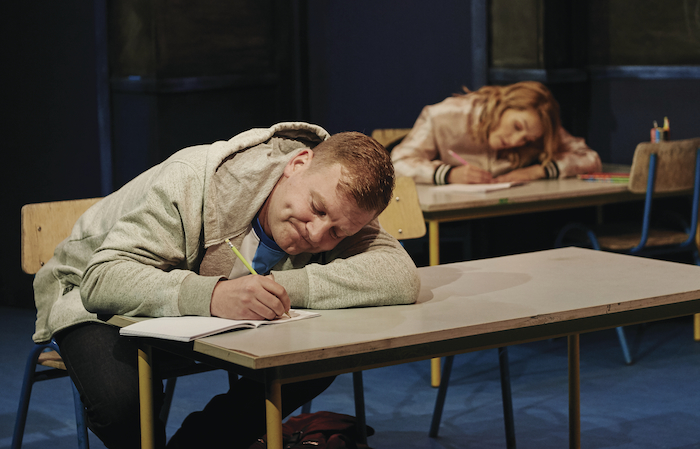 Iseult Golden and David Horan’s play, Class, staged in association with the Abbey Theatre, was an outstanding piece of theatre. A classroom meeting between estranged working class parents (Stephen Jones and Sarah Morris ) and their son’s middle class teacher (Will O’Connell ) began as sparky social comedy but steadily became more serious as it took in the pain of marital separation and frictions of class differences. Brilliantly directed by its writers and performed by the cast of three, Class was funny, thought-provoking and moving from first to last.

Other personal highlights were the ‘diorama drama’ of Flight’s tale of modern migrants; Gardens Speak’s sombre tribute to the dead of Syria, the exuberant feel-good sounds of Amadou and Mariam, Sonya Kelly’s brilliant Furniture for Druid, Jennifer Cuningham’s After the Future exhibition, GYT and Galway Community Theatre’s Wit and the psychedelic majesty and magic of The Flaming Lips. It’s been a vintage GIAF; dead good one could say.