Following the Arlington opening, and in collaboration with the Irish Arts Center in New York, Walsh’s Rooms, a Galway International Arts Festival production, opened on Monday night at Cybert Tire, the future home of the new IAC. It will also run until May 28.

Earlier in the week, the festival team were guests of the Irish Consul General, Barbara Jones, where they presented the first US First Thought Talk at the Irish Consulate in New York. Gavan Hennigan was in conversation with award-winning author and journalist, Belinda McKeon. 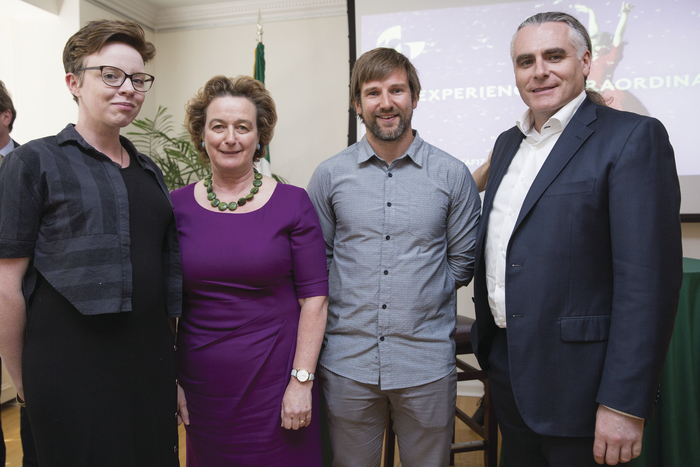 Speaking at the reception in the Irish Consulate, New York, CEO John Crumlish said: "We’re 40 this year and as part of our birthday celebrations we’re presenting our biggest programme to date with over 200 events in 29 venues in 14 days. Galway is the ship in which we all sail and which we’re very proud to represent here today."

Speaking about presenting Enda Walsh’s work in New York, festival artistic director Paul Fahy said: "Collaborations have been at the heart of the Festival since we became a production-led festival a number of years ago. It’s so exciting to be in this great city celebrating Enda Walsh in New York with our wonderful co-producers Landmark Productions and Anne Clarke on Arlington at St Ann’s Warehouse, and with the Irish Arts Center on Rooms."

The festival will once again collaborate with Enda Walsh this July with a world premiere of The Second Violinist a new opera by Donnacha Dennehy and Enda Walsh, a Landmark Productions and Wide Open Opera production. Aaron Monaghan plays The Second Violinist, joined by singers Máire Flavin, Sharon Carty, and Benedict Nelson, with a 16-strong chorus, and the Crash Ensemble.

The Galway International Arts Festival runs from July 17 to 30. Tickets are now on sale through www.giaf.ie