THE GALWAY International Arts Festival was officially launched at the Galmont Hotel on Tuesday evening amid a wave of great music and good vibes. This is the festival’s 41st year and, if that makes it middle-aged, it still exudes enviable levels of energy and imagination.

Local ensemble Galway Street Club revved up the crowd with their ebullient, brassy sound and, once we were well revved, the speeches began with festival director Paul Fahy. “Today is the realisation of everything we’ve been thinking about for the last 12 or 18 months, or even longer,” he declared. “It takes such a big effort from so many people to make it happen. I love this coming together of artist and audience and it’s such a magical fusion when those two collide and meet and embrace and engage and that’s what makes the festival what it is. The festival is a fantastic, powerful way of acting on a place and it’s great to see the mood around town in the last 24 hours as things are kicking off and I hope you’ll all be challenged, excited and energized seeing amazing work from all over the world, including our own local productions from Galway.”

Mayor Niall McNelis waved the flag for Galway 2020 in his address; “Galway is a city built by artists,” he asserted. “We owe our reputation to our artists; this unique and special place where creativity and imagination thrive. Let’s celebrate every artist and their role in making Galway what it is and let’s make Galway 2020 a huge success.” 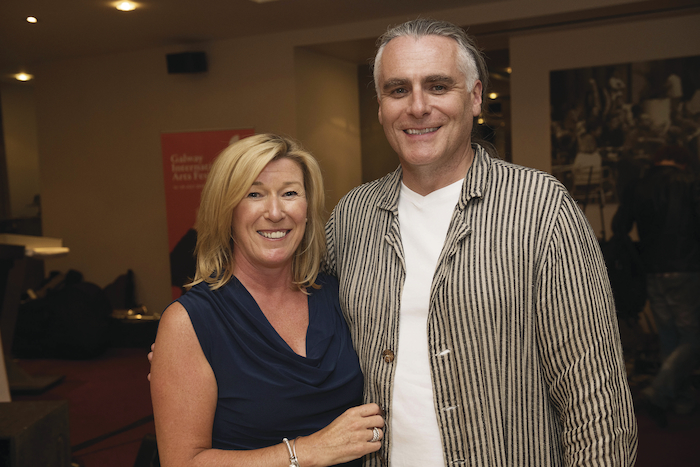 The festival was then officially launched by Scottish artist David Mach, whose Rock’n’Roll exhibition is one of the highlights of this year’s programme. The centrepiece of that show features a caravan, a car and a boat being engulfed and borne aloft by surging waves of newspapers (166,000 individual newspapers ) erupting out of the gallery floor.

“I’ve been here for a few weeks and for most of that time I’ve been immersed in rubble and bent over double with loads of newspapers,” Mach began. “One day I was trying to explain what I was doing to a taxi driver and he said to me I seemed to be talking about my head and my arsehole and they are the two points I’ve tried to keep covered! My notes for this speech were ‘keep it short, keep it casual, and swearing is optional’ - or should I say 'swearing is f**king optional'.

"Everyday I’ve been here I’ve seen crowds of people walking up and down the street and they are here because of the festival; it has dance and theatre and music and great people busking on the street, and that takes people into town and that makes you all a cultural force like an army. I love that all you guys here tonight are like an army and when you put on the poetry, theatre and plays people start coming to see them and they spend money and stay in hotels and go to bars and restaurants and that is an economic force. Give yourselves all a pat on the back!”

With those affirmative words from David Mach, Galway International Arts Festival 2018 was well and truly launched.