DRUID THEATRE'S GIAF double bill of new plays from Cristin Kehoe and Sonya Kelly have been among the highlights of this year’s festival, marking out both authors as writers of real talent.

Kehoe’s Shelter centres on a group of homeless people squatting in a derelict Dublin building. Aaron Monaghan’s edgy Fus recalls how his great grandfather had occupied the same building during the Easter Rising, and Kehoe’s script invites us to contrast the idealism of the 1916 rebels with the social inequalities and problems plaguing today’s Dublin. Sean O’Casey is another point of comparison; the characters here are from the same social class as O’Casey’s tenement dwellers but whereas they had some security of tenure, despite being poor, Fus and his companions are in a far more precarious situation. 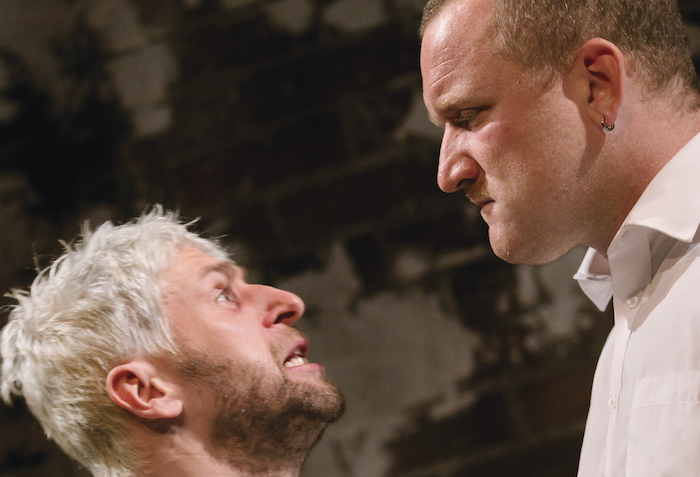 Kehoe makes her points with a light touch and, amid the bantering and bickering, she shows her group are a real community. Alongside Fus, there is his feisty girlfriend Majella (Lauren Larkin ); Rory Nolan’s caretaker; ‘Polish Tom’ (Mark Huberman ); Brendan Conroy’s older character, Bren; and Rebecca Guinnane, who plays estate agent employee Angela. Under Oonagh Murphy’s direction the cast all deliver strong performances in a strong show.

Francis O’Connor’s set design cleverly functions for both Shelter and Furniture and the latter play is a total delight. Comprising three short two-handers, all revolving around an item of furniture, Sonya Kelly’s play has many laugh-out loud moments, lots of zinger lines, sharp insights and moments of touching tenderness. Peter Campion and Clare Monnelly play a married couple bickering at an art exhibition; Aisling O’Sullivan and Rebecca O’Mara [pictured below] are a lesbian couple planning to move in together after just a few weeks of knowing each other; and Niall Buggy and Garret Lombard portray a dying gay man and his nephew who is helping sort out his will. 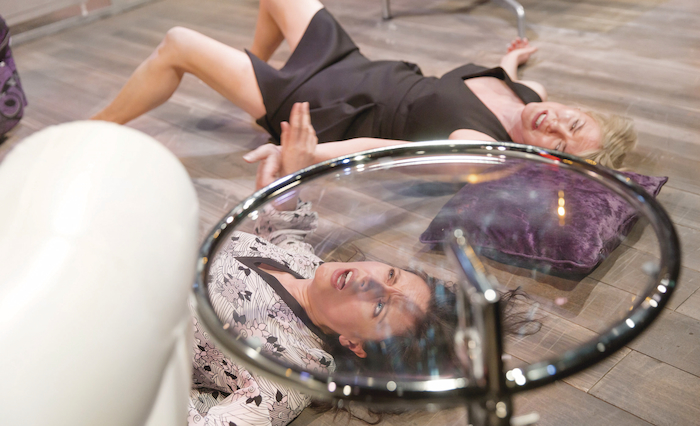 Like Oonagh Murphy, director Cathal Cleary gets fine performances from his six actors but I have to single out Aisling O’Sullivan’s Stef. I’ve not seen O’Sullivan do such a strongly comic role before and she was brilliant throughout as an interior design fanatic who learns with horror that her new girlfriend is a hippy with tastes the opposite of her own. “It’s like 1987 threw up in my living room” she declares at one point. Her comic timing and expressiveness were top notch and a joy to watch. [Shelter and Furniture continue until Sunday. See www.giaf.ie]

The play commences with a bit of Brechtian agitprop outside An Taibhdhearc as protesters clash noisily with security men and gardaí. As the play continues within the theatre, we witness a divisive public meeting where opponents and supporters of an offshore fracking enterprise air their views in an increasingly heated atmosphere.

The fishing family leading the opposition are the main focus of the play; Pat (Macdara Ó Fátharta ), his son Tom (Diarmuid de Faoite ), daughter Cáit (Siobhan O’Kelly ) and her husband Simon (Seán T Ó Meallaigh ). The social tensions triggered by the protests are mirrored by frictions within the family; Cáit has been trying and failing to conceive via IVF and wants to try once more, despite Simon’s opposition. We later learn that Pat, Tom and Simon have been covertly employing an Egyptian migrant on their boat and treating him almost like slave labour, so that in seeming to be plucky underdogs in resisting the fracking company, they are then shown to be capable of being oppressors as well. 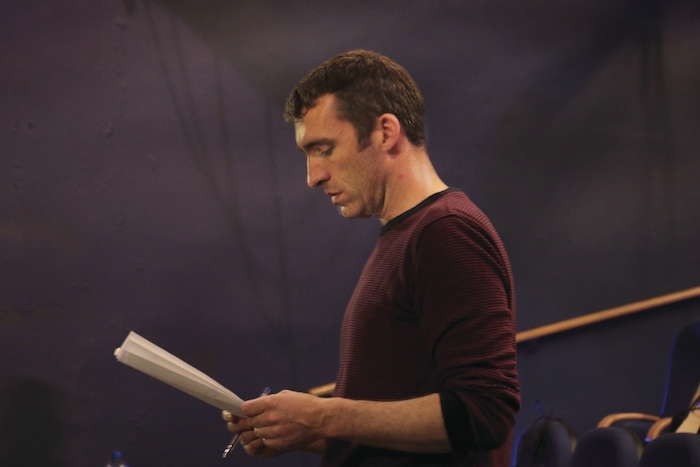 Mac Con Iomaire [pictured above] packs a lot in to his play’s two hours and his insights into the way that a culture of secrecy and lies can taint both a community and a family are telling, and highlight malign yet very real aspects of Irish life. Perhaps at times he over-eggs the pudding plot-wise so that its different strands can crowd each other. There is also an occasional tendency to tell us rather than show us key events in the story. Nevertheless, this remains a strong piece of work and highly topical in its concerns.

A PLAY about an academic dying of cancer may not sound like feel-good festive fare but Margaret Edson’s Wit is an absorbing and moving portrayal of one woman’s very human struggle with illness, pain and the fearful onset of death. In keeping with its title, it also has its share of wit and humour amid the suffering. Andrew Flynn’s fine production for Galway Youth Theatre and Galway Community Theatre, serves Edson’s play very well indeed. 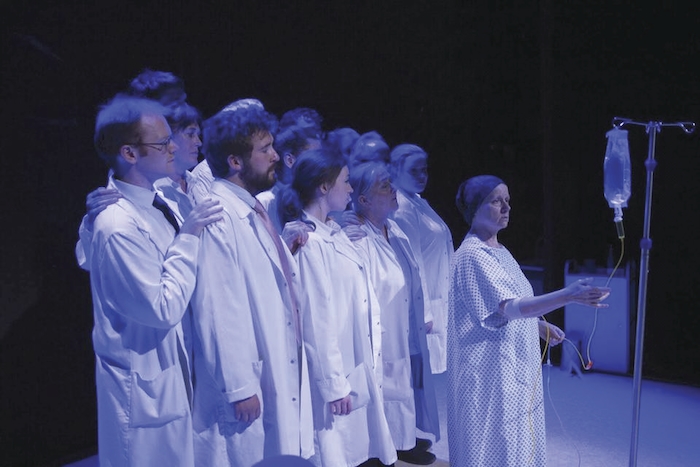 Vivian Bearing is a 50-year old literature professor whose specialty is the poetry of John Donne. We meet her just as she discovers she has Stage 4 ovarian cancer and then follow her over the gruelling months of chemotherapy and her growing realisation that her condition is fatal. Bearing, wonderfully played by Mary McHugh (who has herself battled cancer ), addresses the audience directly for much of the play, commenting on her illness’s progression. We learn that she has always been a self-possessed individual and a rigorous academic taskmaster, driven more by career perfectionism than the warmth of human relationships. But as her illness advances she finds that neither her own academic rigour, nor that of the doctors treating her, can withstand the suffering or fear of death that loom ever larger in her days. She discovers that the simple human kindness of her nurse is the balm that helps her face her final ordeal.

One of the virtues of Edison’s script is that, while including poetry analysis and medical jargon, it seldom feels like heavy going. The humanity of the characters, both Bearing and her carers, is what shines through most strongly and keeps one engaged from first to last. 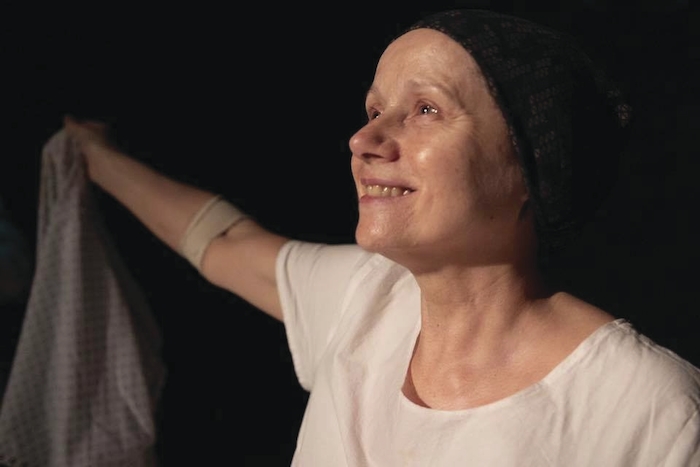 While McHugh [pictured above] is great in the central role of Vivian, Peter Shine also impresses as Jason Posner, the young research doctor whose fierce fixation on his discipline mirrors hers. Tara Finn as Nurse Monaghan, Ger Howard as Dr Kelekin and Gerry Ferguson in the touching scene as Vivian’s old teacher visiting her sickbed are all worthy of note.

As well as coaxing fine individual performances from his leading actors, Andrew Flynn choreographs his large cast with great adroitness; the white-coated chorus framing and enhancing the action. Wit continues at 4.30pm daily until Sunday.