DECADENT THEATRE Company hit the Town Hall Theatre stage next week with a revival of one of its biggest hits; Martin McDonagh’s scabrously funny black comedy, A Skull in Connemara.

Directed by Andrew Flynn, Decadent’s production enjoyed hugely successful tours in 2013 and 2014 and this latest outing looks all set to be another sell-out smash. The play centres on gravedigger Mick Dowd (Pat Shortt ) who, each autumn, has to disinter the bones in certain sections of his local cemetery to make room for new arrivals. As the time approaches for him to dig up the bones of his own late wife, nasty rumours regarding his role in her sudden death seven years earlier begin to resurface. Nosey neighbours, troublesome teenagers and an ambitious garda further add to this macabre, yet hilarious, play.

Taking the part of village busybody Maryjohnny Rafferty is Maria McDermottroe, one of Ireland’s finest actors and, during a break in rehearsal, she sat down with me to talk about the show.

'She fits in very nicely with the fabric of the play because most of the characters are not very nice people. Maryjohnny is always doing other people down and she can really hold a grudge, she has all of that kind of thing'

McDermottroe’s CV includes films such as The Dead and Angela’s Ashes, the TV roles of Venetia in Glenroe and Mrs Gilhooley in Killinascully, and a string of stage appearances with many of our leading theatre companies. As Bloomsday is almost upon us, I began our chat by asking Maria about her recollections of playing the feisty Molly Ivors in John Huston’s film of James Joyce’s The Dead.

“I have very fond memories of that,” she smiles. “It was my first movie and to say that my film debut was with John Huston in LA, that’s something. It was a very exciting time. My two daughters were very young at the time; I can still remember leaving them, it almost broke my heart but the film experience itself was lovely. Huston was amazing to work with, what a brain. He was a very good artist and you could see that in the way he would edit and cut; he knew exactly what he wanted. A lot of the scenes were done in one take – which could be alarming for us actors because we were expecting to be able to do it again, but John would say ‘OK, fine, ladies and gentlemen that’s a cut.’ I think that film is a masterpiece.”

And so to Skull in Connemara; “This play was my first engagement with both Martin McDonagh’s work and with Decadent Theatre Company,” Maria tells me. “I read the script and really liked it. We did a very extensive tour of it last time, we covered the country. It’s lovely to come back and do it again. I love it as a piece of theatre. As soon as I went on the stage in the play I immediately realised the audience were getting it. Maryjohnny and Mick Dowd open the show and within a couple of minutes the laughs had started. To tell you the truth I wasn’t expecting it and it was great. I was thinking ‘wow, this works’. And it does work; Martin has the most amazing way of writing.” 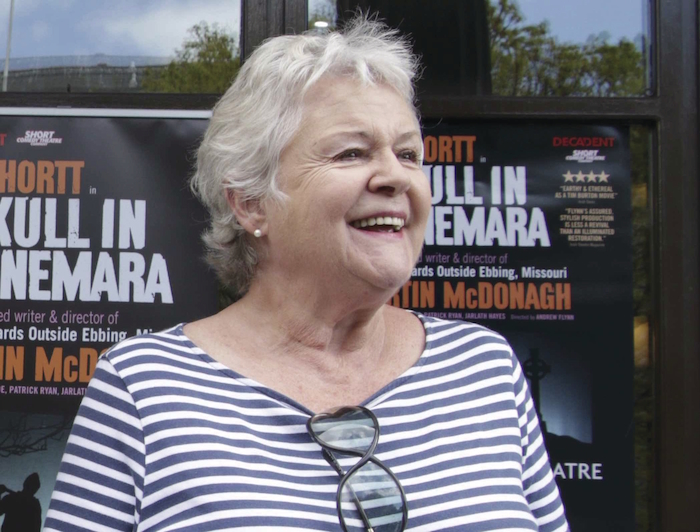 Maria describes her character, Maryjohnny Rafferty; “She is part of the village and she’s a nasty piece of work, in many, many ways. I’d say she is the cause of a lot of trouble within the community – she is mentioned in the other two plays of the Leenane Trilogy as well. She fits in very nicely with the fabric of the play because most of the characters are not very nice people. Maryjohnny is always doing other people down and she can really hold a grudge, she has all of that kind of thing. She is just a joy to play, I love her!”

This production sees her reunite with her Killinascully co-star Pat Shortt and she’s also enjoying teaming up again with the rest of the Decadent company; “Pat and I were only in one play together before, Sebastian Barry’s Boss Grady’s Boys, but we barely had one scene together in that. So I’m really loving sharing scenes together in Skull In Connemara, and also being back working with Jarlath Tivnan, Patrick Ryan, and Andrew Flynn. We’re all relishing the work bigtime and I always think that really translates in a performance. It is going to be a good night’s entertainment so get along and see it.”

A Skull in Connemara runs at the Town Hall from Monday June 25 to Saturday 30 at 8pm, with a 3pm matinee on Saturday 30. There are also preview performances from Thursday June 21 to Saturday 23. Tickets are available from 091 - 569777 or www.tht.ie