Port Authority introduces us to Kevin (Jarlath Tivnan ), Dermot (Patrick Ryan ), and Joe (Garrett Keogh ), three generations of Irishmen. Set against the backdrop of contemporary Dublin, each man’s story is a beautifully woven tale of failure, loss, the elusiveness of love. With great wit and compassion, this is a beautifully observed drama from McPherson [pictured below] about the also-rans of life.

“We last did the play in 2012 and it was a really strong production so I felt it would be a good show to bring back for the festival,” Flynn tells me. “The play is about love in a way. It focuses on three men of different ages. The youngest, Kevin, has just moved out of home because he is infatuated with a girl, so his story is all about growing up and learning love can be difficult. He is convinced he is madly in love but comes to realise the person you fall in love with might not be the person you end up with. 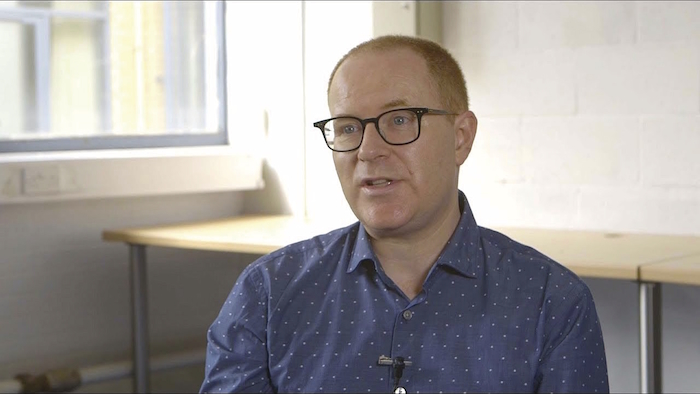 "The second story is a middle aged man, Dermot, who has just been appointed to a very senior position in an accountancy firm, yet he’s not even a qualified accountant. He is moving from a mundane life into a high-powered executive world. His story is about the attraction of that, his head is turned by it, but it turns out he was promoted in error, he just had the same name as the intended recipient. He learns that faraway hills aren’t always greener and that love is not just about how someone looks, it is a deeper emotion.

"The third character Joe, reprises the role from our previous staging, is an older man who has been happy in his life but has an encounter with a neighbour and kind of fell in love with her. The three characters are all connected in a subtle way, but are not aware of each other so their stories are separate, but interwoven. It has beautiful writing and lots of humour and fantastic stories.”

Margaret Edson’s Pulitzer-winning drama, Wit, focuses on Vivian Bearing, a professor of metaphysical poetry who is battling ovarian cancer. Both poignant and funny, it is also a topical choice given recent news headlines about women and cancer treatment in Ireland. However, Flynn’s interest in the play predates that controversy.

“Wit was a play I first read years ago and Mike Diskin [photographed above]wanted to put on a big production of it in the Town Hall when he himself became ill with cancer,” he reveals. “At the time we couldn’t get the rights even though Mike tried hard to get them, he felt passionate about the play. Since Mike passed away I always felt I wanted to finish that journey. I’ve been applying for the rights for a few years and this year I finally got them. It is a very powerful play and we’re doing it with a large cast. Even though it is usually done with five actors but we have 19.

"It is very funny, very touching. Mary McHugh is playing the lead role of Vivian and she herself has battled cancer. The way Vivian deals with her illness, the dignity with which she fights it, has a lot to say about life. She is an expert on the poetry of John Donne but in a way it is only now she truly understands them as she is faced with her death.”

Flynn’s previous GYT shows lent themselves readily to being done with a large cast as they often featured song and music in which a chorus could flourish. How has he adapted Wit for his cast of 19? “It is very different from the previous plays we did for the festival,” he admits. “Within the play, being set in a hospital, there are scenes with student doctors so the chorus portray them, but they also provide a visual aspect so they don’t have lots of lines, but they are constantly present, and they amplify the emotion of a particular scene. They are often used when, for example, Vivian is reminiscing about something from her earlier life. When she is so ill that she can scarcely speak they amplify her thoughts. It’s hard work but it is going very well, I’m pleased with it.”

Wit runs throughout the festival at 4.30pm while Port Authority is at 8pm, with 2pm matinees on July 21 and 28. Precise details of show dates is on www.giaf.ie