While most people think of dolls as mass-produced Barbie-type artefacts, the creations of Kinvara based dollmaker Helga Pikal are of an entirely different order. Her hand-made, lovingly crafted, dolls present an array of vividly realised characters from world myth and folklore, as well as famous singers and musicians like Keith Richards and Willie Nelson.

Over a Monday afternoon coffee, Helga told me how she got into making dolls, and it’s a story as colourful as the dolls themselves, as it takes in international travel, 'cowboy and Indian' re-enactments in Germany, and some quirky commissions.

Helga was born and grew up in former Czechoslovakia, moving to Germany age 14. She has lived in the west of Ireland for the last 28 years. From early childhood she had a strong interest in the folklore, ethnology, myths, legends, and the arts and crafts of world cultures. She worked for many years making authentic replicas of Native American artifacts and restoration work (bead work, quill work, rawhide painting, weaving, wood carving etc. ) for collectors and museums.

It was after moving to Ireland that she developed her skills in making Art Dolls – mostly witches, fairies and mythological characters. Her first exhibition was in the Joe Geoghegan Gallery in Galway about 25 years ago. Many exhibitions followed, and her dolls today are sold worldwide.

“I grew up among the mountains of Czechoslovakia on the eastern German border,” she tells me. “It was a very industrial area with a chemical factory and coalmines. It wasn’t a nice place to grow up. When I was 14 we emigrated to Germany. My dad was always into making things, he used to do Airfix models of World War II planes, and old sailing ships. I used to join him in doing that.

"I made rag dolls and buildings from matchsticks. I did all that stuff because in Czechoslovakia at the time there wasn’t that much else to do, people had to be inventive so I made my own toys and clothes for my ragdolls. I got interested then in folklore and mythology and fairytales and folksongs.” 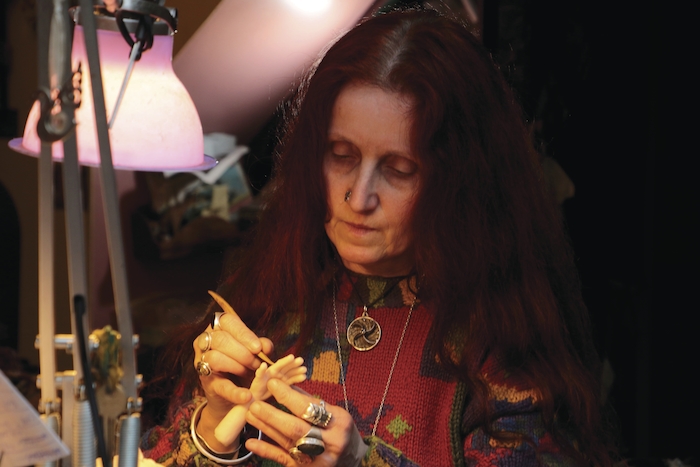 Helga’s early interest in folk song led her to discover Irish music which quickly became a passion. “In Czechoslovakia we didn’t get much western music, but somebody brought us a tape one day, maybe it was the Dubliners, and I loved it," she says. "I got obsessed with Ireland and started collecting Irish music. Later, when I moved to Germany, I had more scope to research the music and culture, I’d go to every Irish concert I could. In 1980 I started coming to Ireland for holidays and that was it. I kept coming back and Galway especially made an impact on me, it was the mecca of the music scene and lots of crazy people – some of my memories are a blur of those times!”

It was in Germany Helga began making dolls in earnest. “I started making the salt dough dolls in Germany, they were a popular Bavarian thing," she says. "I made dolls in international costume. People liked them so I started selling them. I started collecting puppets, I travelled to India and Sri Lanka and got puppets there. One day someone said ‘Why don’t you make one yourself?’ So I got the material and made one and then someone asked me ‘can you make me a witch doll for my mother that looks like her?’ That was the first witch I ever made. From that I went on to make more witches, wizards and fairies.”

During this period Helga’s main source of income stemmed from catering to Germans’ unlikely passion for the clothes and trappings of American Indian life. “I was doing lots of Native American crafts,” she recalls. “I was the member of a re-enactment group and I did craftwork and embroidery doing replicas of Amerindian costumes for collectors and museums. I did a lot of research into them, I ordered books from America and I visited museums and even travelled to America to see the original costumes – you don’t see all the details from just looking at photographs. 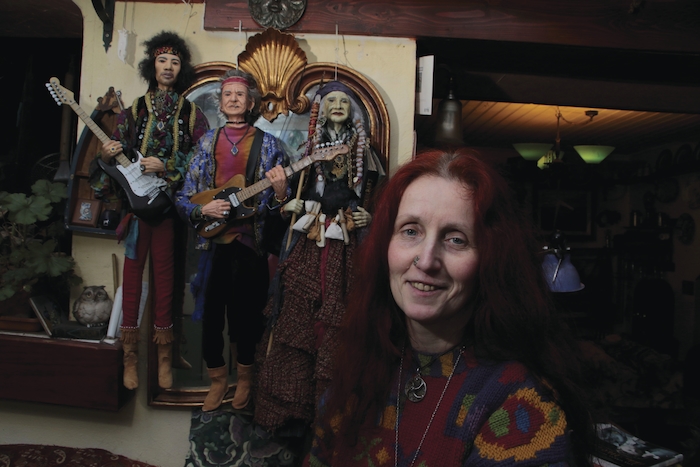 "Re-enactments were really big in Germany. People would live like Indians in teepees, you’d get people dressed up as Indians and cowboys and fur trappers. They’d have big get-togethers around Pentecost with thousands of people from all over Europe and there’s be all these teepees and they’d also construct an old-west style town!”

I ask Helga about the material she uses and how long it takes her to make a doll. “I use polymer clay, it’s a synthetic clay that hardens after you bake it and you can carve it and sculpt it, paint it and varnish it," she says. "A witch doll takes about a week to make, but then something like a Mongolian shaman doll with its elaborate costume will take three or four weeks because of the embroidery, and so on, that’s required.”

I particularly like Helga's musician dolls, a type she has only started making recently. "I wanted to do one of Keith Richards to begin with," she said. "Making a guitar from scratch was tricky. My partner, Stewart Cowell, is a guitarist so I thought I could just make a miniature one from studying the ones he owns but the guitar took me longer than the doll because of the detail. I don’t have the right tools for woodworking. After doing Keith I did Jimi Hendrix and Willie Nelson. BB King is the next one I want to do.” 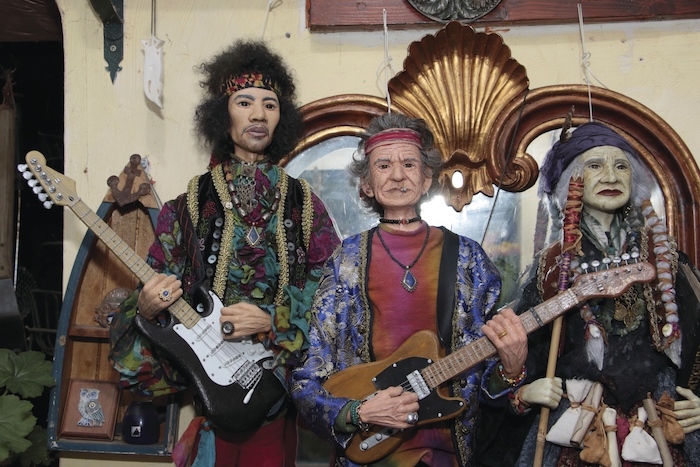 Does Helga have a particular favourite of all the character dolls she has created? “Albert Einstein was one of my favourites,” she admits. “That was an order by Sean Moran from Dublin who goes around festivals and sells maps. He is a character. He wanted me to put a magnet in Einstein’s head so that he could make it levitate somehow. I started making the head hollow so it could be opened but I don’t know what he did afterwards, I basically just did the doll. I was sad to let Einstein go, I remember Sean picking him up in his van and he put him in the passenger seat with a seatbelt on and drove off.”

Helga’s current project is a famous Irish singer of yore. “I’m now doing one of the tenor John McCormack for the lady who owns the Bastion gallery in Athlone, Katie McKay," she says. "I previously did a Michael Jackson doll for her. Her great grandfather, Michael Kilkelly, was a choirmaster in Athlone and he discovered McCormack and pushed him to become a professional singer despite the opposition of his family. So she asked me to do a doll and I am making him in his costume from Don Giovanni."

Helga’s dolls can be viewed at www.etsy.com/ca/people/helgapikal1