MIDDLETOWN, THE beguiling comedy-drama by American author Will Eno wil be staged in the Town Hall Studio from tonight, tomorrow, and Saturday, by the Galway Actors Workshop.

A seasonal affirmation of the sacredness of ordinary existence and a reminder that asking unanswerable questions is part of what makes us human, the play is set in the fictional town of Middletown, which has a library, a hospital, a monument, and a population prone to pondering the mysteries of birth, death, and all that lies in between. By turns hilarious and tragic, the story unfolds as a series of vignettes depicting the burgeoning friendship between two lonely outsiders and the very ordinary redemption of one of the town’s lost souls.

The play is directed by Sarah O’Toole and last weekend she sat with me to tell me what drew her to it and to delve further into its many delights. “I first read it in NUIG I loved it, I thought it was really unusual and it stayed in my mind,” she begins. “I felt it was a good one to do with Galway Actors Workshop because it has a lot of potential for characterisation, dialogue, monologues, and ensemble work.

"Also, we have found in rehearsal that it is even funnier than it reads on paper. It is a lovely show to put on at Christmas time, it deals so much with questions of birth and death and being human, and there is a warmth in the way it does all that - and it ends with the birth of a baby, like a good Christmas play should! It’s very much a play about both loneliness and community. It’s the story of a community that learns how to open up. At the start of the play the characters are just named by their jobs - cop, librarian - but by the end of the play you have learned everyone’s name. So they start out like cardboard cut-outs then gradually become human. 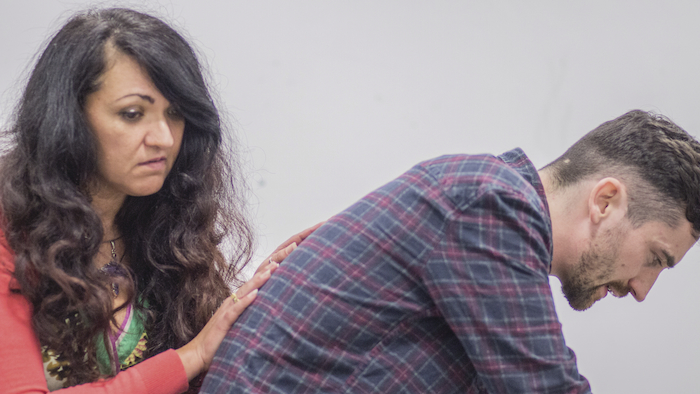 "The cop seems an authoritarian figure at the start but we find out he has his own troubles. The characters are very recognizable. There are no big plot-twists but people still find grace and redemption in the course of the story. It’s a really interesting script to engage with in rehearsals and we’ve had a lot of fun and great conversations about it.”

Sarah concludes; “In this internet age our buttons are being pushed all the time with social media and we’re always being triggered into heightened emotion and Middletown is ultimately about what is ordinary. I think it is an important piece of writing; it brings us back into a celebration of belonging and community and finding your own voice and acceptance.”

Middletown runs nightly at 8.30pm. Tickets are €12/10 and are available from 091 - 569777 or www.tht.ie Galway Actors Workshop have a new term starting in January with classes ranging from beginners to advanced. See www.galwayactorsworkshop.com