AN TAIBHDHEARC is set to host Snámh na Saoirse, an imaginative play by Róisín Sheehy, which fuses dance, drama, and music. This is Sheehy’s debut work for theatre and is a poetic re-telling of a tragic drowning which occurred off the Great Blasket Island in 1909.

The play is a production of Dingle’s An Lab and is directed by Áine Moynihan and the cast includes Mollie Loibhéad, Iarfhlaith Ó Murchú, and Zoë Uí Fhaoláin. Ahead of its Galway performance, Moynihan spoke to me about the play, and its' author.

"Róisín has a background in contemporary dance and she has also written for radio, including Sunday Miscellany and she has presented programmes on Raidio na Gaeltachta,” she says. "Róisín gave me the script about two years ago and I saw straight away that it had a lot of potential. She wanted movement as part of the production and we had a resident choreographer/dancer at An Lab, Maria Svennson, funded by the Arts Council and Kerry County Council, and she choreographed the dance sequences for the production.

"Then we got the brilliant artist Tomas O’Ciobhain to do visuals; we used his etchings of Blasket Islands as projections in the show. We have newly composed music by Gerry O’Beirne which is set to poems by Róisín, and there is also live trad music throughout the show by a fiddler and concertina player.”

Róisín Sheehy is the daughter of poet Domhnall Mac Síthigh who drowned in June of this year when his boat capsized off the coast of Spain. While the play is dedicated to his memory and also dramatizes a drowning incident, it had been written prior to his sad demise. 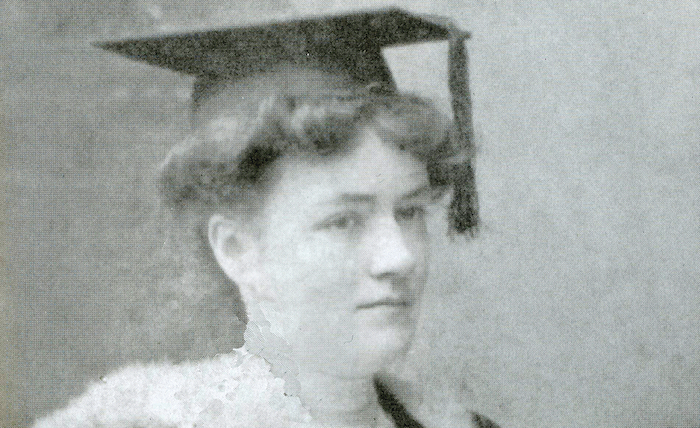 In the Blasket tragedy those who drowned were Eibhlín Nic Niocaill [pictured above] from Dublin and Domhnall Ó Criomhthain, son of famed Blasket writer Tomás Ó Criomhthain, author of The Islandman. Eibhlín (24 ) was one of the leading lights in Gaelic scholarship and the youngest elected member of the executive committee of the Gaelic League. According to some sources she was romantically involved with the patriot Pádraig Pearse. She went to the island to improve her command of Irish and stayed with a family there. She was a good swimmer and spent some of her time teaching the island girls to swim.

Domhnall Ó Criomhthain (18 ) heard the screaming and rushed to the strand. Without removing his clothes or hobnail boots, he plunged into the sea but after reaching the two women he sank. Both he and Eibhlín were drowned. Another islander, Peats Tom Ó Cearnaigh, also heard the cries for help and ran to the strand. He managed to reach Cáit and hold her head above water until a naomhóg came along and helped him bring her to the shore where she was revived.

Snámh na Saoirse is at An Taibhdhearc on Saturday December 2 at 8pm. For tickets contact 091 - 562024 or email [email protected].