Today, Thursday November 9, the Galway City Museum officially celebrates its 10th anniversary and, by any measure it has been a decade of success. Annual visitor numbers have risen from 16,000 in its first year to 216,000 last year. The museum has received TripAdvisor’s Certificate of Excellence for five years running and it meets all 34 requirements in the Heritage Council’s rigorous Museums Standards Programme.

At the helm of museum operations is the personable and highly capable figure of Eithne Verling, and over a pleasant Monday afternoon coffee she reflected on the venue’s achievements to date and outlined some of the exciting plans for the future.

Verling was surely destined for a career in the arts and culture sector. Her father is the highly regarded landscape painter Walter Verling, while her mother Louise was a fine pianist and the only sibling of Sean Ó’Riada. Both her parents taught at Mary Immaculate College in Limerick, near which the family lived. Did she have a very artistic upbringing I ask?

“We were 100 per cent arty farty in our house!” she declares with a smile. “It was part of the DNA. It was a very open house and artists often came to stay; my sister Katie and I once counted up that we had 24 different people staying with us at different times. We also had a lot of hands-on experience of art in that my mother encouraged us to play various instruments - I played the cello. Through her family we had a lot of contact with music both traditional and orchestral.

"Dad painted all the time; as soon as there was good weather he’d be off outdoors painting. During summer holidays he often took us with him so we’d be sitting around his easel in Connemara or Youghal. We would also have been visiting exhibitions and museums from the time we were very small, as well as monuments –which is how I ended up becoming an archaeologist.”

While Eithne’s mother passed away in 2005, her father, now aged 87, continues to paint. In reviewing a major Walter Verling retrospective for The Irish Times in 2008, Aidan Dunne wrote that his career embodied aspects like "a belief in the value of education and public service, and a highly developed sense of place, of local identity and community". Those words could, verbatim, describe the values championed by Galway City Museum – but how did Verling make the shift from archaeology to curatorship?

“In 1990 I was working on the Galway Archaeological Survey and my mother sent me an ad for a job as curator with the County Museum in Donegal,” she replies. “I remember saying ‘Mam, I haven’t a hope, I have no idea how to run a museum!’ But I did the interview anyhow and I got the job; I was absolutely shocked, I was still in my early twenties. It was a complete game changer for me.”

After four years in Donegal, Verling became project manager for Galway Theatre Trust and then served for eight years as the museum's and archives officer of the Heritage Council. During this time she also married Galway Arts Festival’s John Crumlish, who she had met while still a student in NUIG. In 2004, with three children to look after, she gave up her Heritage Council job to become a freelance consultant.

In this latter capacity she had peripheral input into Galway City Museum when it was first opening and then, in 2011, was brought in to for a few months to work on the venue’s exhibitions.

“When I got the job as director of the museum, in 2013, I had a good sense of the building and its scope because of previously curating those exhibitions,” Verling notes. “I saw there was a lot of untapped potential around this whole historic site. One of the first things I did was draft a strategic vision, drawing on work done by Jim Higgins and Carol Phelan from the city council, which envisaged an extended museum site that would take in Comerford House and the derelict site over the sea gate.

"We also wanted to highlight to the public the incredible richness of the city and its hinterland. There had been some criticism of the museum over the years and we all felt that the best way to address that was to get our house really in order, have our policies written and programmes worked out and costed so that we were accountable on every front. We strove to get everything right with collection care, visitor care, exhibitions, education and strategic planning.”

Verling’s energy and commitment has seen the museum steadily enhance its status as a valued civic and community resource and one of the city’s most popular tourist attractions. Its ability to connect with the people of Galway was well illustrated by one of its major current exhibitions, Revolution In Galway, covering the 1916 to 1923 period.

"We started off with very few objects for that,” Verling admits. “We then put out an open call for people to bring in material to us and we got an absolutely fantastic response, as you can see from the collection. There is so much material that literally came out of people’s attics to be present in this exhibition.”

The War of Independence and Civil War eras pose problems for those commemorating them as the events and their interpretations remain contentious. How did Verling and the museum approach the era? “One does need a delicate approach to it because the sensitivities are still very present,” she acknowledges. “We’ve tried to be very open and objective and just tell the story as it was and let the objects speak for themselves to a great extent. Some of the objects are very poignant and have wonderful stories behind them. If you tell the story of the object and its history in some ways that mitigates difficulties around the bigger picture because it’s just giving you a snapshot. It’s our job just to present the material culture not to be historians or pronounce on anything.”

One problem previously affecting the museum was the lack of ultra-violet screening on its large windows, which limited what it could exhibit. This is now being remedied; “We have got a significant grant from the Department of Culture, Heritage & the Gaeltacht of €180,000, which is being matched by Galway City Council, to help us address the museum environment so that we can get this building up to international standards,” Verling reveals. “We’ll have a big exhibition space that is totally environmentally secure so we can take exhibitions from anywhere in the world.” 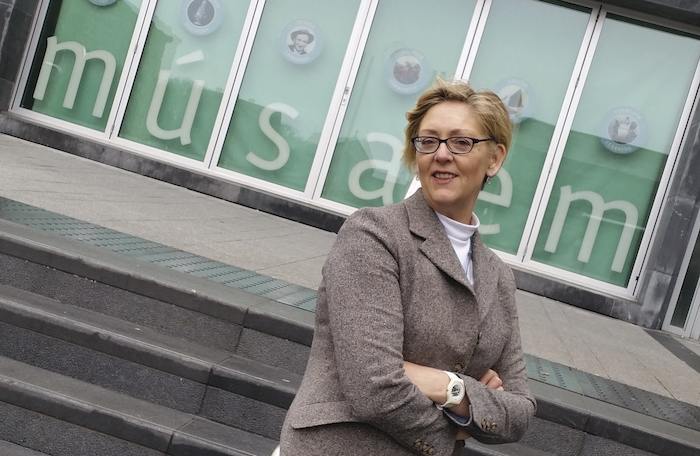 Looking forward, Verling’s main focus is on realising the extended and revamped museum site and cultural district first outlined in her strategic vision document. An application for a €4 million grant from Fáilte Ireland has already cleared the first hurdle in the award process. While work proceeds on that front there are some exciting exhibitions in the pipeline.

“We have a major exhibition coming up in 2019 which will be curated by Professor Liz Fitzpatrick from NUIG, on Gaelic Ireland from 1200 to 1600,” Verling reveals. “Her focus has been on the learned Gaelic families and the beautiful manuscripts they produced so as part of that we’ll be looking at Galway in that period and how it functioned. Also, over the past five years we’ve had a great partnership with the Marine Institute and together we’ll be doing an exhibition on climate change.

"Then, in 2020, we have a project with the Royal Astronomy Society who are 200 years old that year. They have granted us £100,000 toward a project which will entail the creation of a planetary walk from the prom into the museum and on up to the university. There will be luminous metal orbs of the planets along the walkway, I think they’ll look beautiful. We’ll also build an outdoor planetarium outside the museum and Galway’s Sym-phonic Waves orchestra will do a performance of Holst’s Planet Suite.”

Seems like the next 10 years are going to be even more successful than the last 10 for Galway City Museum and Eithne Verling. Galway City Museum opens Tuesday to Saturday 10am to 5pm. Admission is free. See galwaycitymuseum.ie or call 091 - 532460.