The inimitable and flamboyant Mr Pussy - the doyen of Ireland’s drag acts - was in Galway last weekend for a performance at the Róisín Dubh as part of Club GASS’s Galway Pride events. On Saturday afternoon I met him for a chat about his colourful life, career, and many celebrity fans.

Last year Mr Pussy published his best-selling autobiography, Before I Forget To Remember (New Island Books ) in which he recalls his early days as a drag princess and model in Swinging London; partying with Judy Garland, Noël Coward, and David Bowie; being heckled by one of the Kray twins – and snogging Danny La Rue. He also remembers grey 1980s’ Ireland, shocking the country with its first adult panto, and losing friends to the AIDs epidemic. Then there’s his 1990s’ renaissance, with Paul O’Grady and Daniel Day Lewis, and opening Mr Pussy’s world-famous Café de Luxe with Bono. Full of pathos, charm, and wit, it all adds up to a memorable story of a ground-breaking entertainer.

One reviewer of the book posed the question as to whether drag is "showbusiness, sexual appropriation of cartoon femaleness by men or an expression of gender fluidity?" I begin by asking Amsby his thoughts on that.

“As far as I am concerned it is a way of earning a living and it’s better than getting up at eight o’clock in the morning and going in to work six days a week,” he replies. “As for all the rest of it and sexual orientation, some people get a kick out of dressing up and that’s their business, but I don’t. I do it for a living and get paid very well. I’ve been at it for 50 years so that’s not too bad” 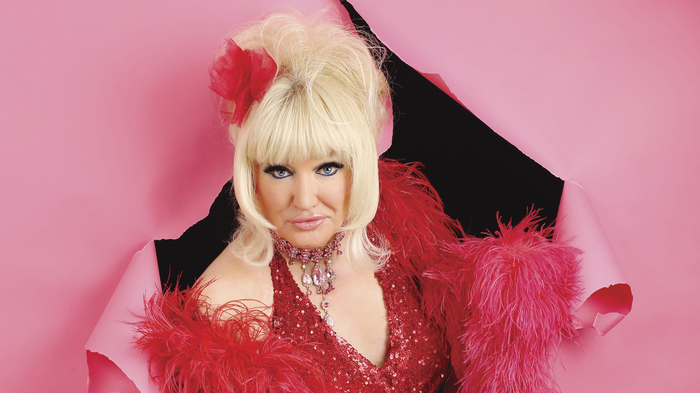 Amsby was born in London, the only child of a lorry-driver father and a barmaid mother. He first began to earn a living as a wig-maker, with one of his clients being Marlene Dietrich. His debut as a drag performer came in the late 1960s at the celebrated Vauxhall Tavern. “A lot of performers started out there including Paul O’Grady with his Lily Savage routine,” he tells me. “It wasn’t specifically a gay bar, but lots of gays went there. They put on shows and I said to the landlady one day I could do better than the acts she was presenting. So she dared me to do it and myself and a friend, Jeffrey Claridge, decided to do something together. We called ourselves Pussy and Bow - I was already called Pussy because I looked like a cat when I was dressed up, and I christened Jeff ‘Bow’ after a dog my mam owned. Jeff went on to be quite famous as well."

The duo were an immediate success. “In those days the drag acts all had long dresses and big bouffant hair but we did something completely different – firstly because we couldn’t afford those sequined dresses though we had wigs because wig-making was my profession," says Amsby. "We got our dresses from C&A and went on as a couple of mod girls; we did all the modern songs of the day and we became quite a hit. Judy Garland came to see us.”

I ask Amsby if his mother, to whom was close, ever came to his shows? “She didn’t know I was doing the drag act at first,” he reveals. “I’d pretend to get up in the morning to go to work then just go over and sleep on a mate’s couch – because I would have been out until six in the morning. Then she saw an article and photo about me and Bow in the local paper and said ‘That’s you isn’t it?’ and I said ‘Yeah’ and she just said ‘Don’t let the neighbours see’ and I told her I could give her more money every week and it was fine. She came to Ireland to see me a few times.”

It was 1969 when Amsby made his first foray to Ireland and he has been here ever since. “Jeff and I were both booked to come to Belfast but we split up just beforehand,” he recalls. “Then the club owner booked me as a solo act for a week. When I was in Belfast I decided I should see Dublin as well and met Jim McGettigan who owned The Baggot Inn. He let me use a room upstairs which we called Mr Pussy’s Parlour and I performed there for six nights a week for two and a half years. They took me to their hearts and I loved the Dublin personalities. Next to Dublin, Galway is my favourite Irish city – they’re all mad here that’s why I feel so at home!”

“The Baggot Inn shows became so popular I was asked on to The Late Late Show,” Amsby continues. “It was still screened in black and white when I first did it and there was only the one RTÉ channel at the time. That established me all over Ireland and I toured all round the country. The Castle Inn in Salthill was one of the first places in Ireland I toured to. I had my own roadshow and band. I then got booked back into England as an Irish act!”

Amsby also became friendly with Gavin Friday who told his life story in the song ‘Mr Pussy’ from his album Shag Tobacco. “My favourite Dublin haunt was Lillie’s Bordello and Gavin Friday used to drink there as well,” he relates. “We got chatting and I told him I’d been in Ireland for 25 years and he said that he must write a song and I said ‘Make it 25 years long’ and his song ‘Mr Pussy’ came out of that.”

Another colourful project from this era was Café de Luxe which was backed by the members of U2. “I knew Paul McGuinness when he was in Trinity, he booked me there a couple of times,” Amsby explains. “He introduced me to the boys and I got to know Bono when I was emceeing Gavin Friday’s wedding – I got him up onstage to sing. We had mentioned the idea of opening a café and they said leave it with them and then not long afterwards Gavin told me ‘they are opening up a café – for you’. The Edge came up with the name Mr Pussy’s Café de Luxe.”

Friday has described the café as being half-way between a greasy spoon and a bordello. “None of the crockery matched,” Amsby recalls fondly. “We had caviar and chips on the menu. Everyone and anyone came there – Jean Kennedy Smith, the American ambassador came with her daughter one night. Ronnie Wood came along, Mel Gibson, Naomi Campbell, Gabriel Byrne. We used to do bingo 'til two or three in the morning and they’d all be there playing it – the only prize they ever won was a dessert. We had great fun.”

Amsby/Mr Pussy’s stature as the ‘dragmother’ of the Irish drag scene was acknowledged by the present wave of performers a few years ago when Panti, Veda, Davina, and Shirley Temple Bar and others put on a tribute night to Mr Pussy in The George Bar in Dublin. I enquire whether there is much competitiveness among the different acts or do they all get on?

“If it’s competitive it doesn’t bother me; I’ve done my thing and nobody can top that,” Amsby replies. “I have lots of mates in the scene like lovely Dusty Flaps who’s touring with me in a show at the moment which is a dinner plus cabaret. Kiki is very good from Galway, and Jane Eyre Square, which is a great name!”