Among the many top-notch comedians winging their way to Galway for next month’s Vodafone Comedy Carnival is Dave Johns, a seasoned veteran of the British and international circuit and, more recently, acclaimed star of Ken Loach’s I, Daniel Blake.

John’s working class Geordie roots are immediately apparent in his accent but, over an afternoon chat by phone, he reveals that he is half Irish. “My mother was from Dublin so I spent my summer holidays there in Raheny," he tells me. "It was a little village then, it’s posh now! My dad was from Newcastle but worked in Dublin in the early 1950s when he and my mum met.”

Dave initially worked as a bricklayer when he left school and later got a theatre job working backstage. It was in 1989 that he took his first steps in the world of comedy.

“I visited London and went to the Comedy Store where I saw modern stand-ups for the first time,” he recalls. “In the northeast it was all working men’s clubs but the Comedy Store had a new type of comedy and it was like a light bulb went on for me when I saw it. At the time I was working in the Tyne Theatre and Opera House. They had a little restaurant that wasn’t doing much so I asked them could I open a comedy club there and they said ‘Yeah, but we’re not paying you any money’ and I said I’d sort out all the acts.

"I had loads of people there, like Frank Skinner, Jo Brand, Jack Dee, Lee Evans, and Irish comics like Dylan Moran and I had Tommy Tiernan over for one of his first gigs in England. I opened the club in 1989 and I started performing because we needed a compere and I thought I might as well do it. I was working every weekend as a compere/comic and was getting good really fast and then I started to get work on the circuit. One of my first gigs was in Galway in the GPO and Tommy Tiernan was doing open spots there which is how I first met him and asked him to come to my club.”

As he honed his act Johns became a skilled comic improvisor and he has made regular appearances with leading improv team, The Comedy Store Players. “I always loved programmes like Whose Line Is It Anyway? and I was always good at being off the cuff and ad-libbing,” he tells me. “It seemed a natural progression to get into comedy improv and I started getting guest spots with the Comedy Store Players and working with people like Josie Lawrence and Paul Merton, and then I got involved with the Improv All Stars as well.”

John’s improv skills were instrumental in landing him his starring role in I, Daniel Blake; “When I got to see Ken I had to do some improv. I did three auditions for him and each time I went in there were different actresses and he’d get us to improvise together just to see how we were listening and reacting to each other. So the improv served me well because I was used to making things up and talking, I think Ken wanted to see how I reacted and listened because it was all about listening and getting the emotions right. Then he saw me and Hayley Squires together and there was a chemistry there and we ended up getting the two main roles.”

He describes Loach’s working method; “There is a script written but Ken doesn’t tell you much. He works chronologically so you live the scenes as you go on. You’d only get the script for your big scene the day before it was shot; he wants you to perform it with all the emotion on the day itself, he doesn’t want you to have pre-conceived ideas about how you are going to play the part. He wants to get a real feel to the scene, almost documentary style. People say we don’t look like actors and that’s a compliment because it means it looks real. That’s the essence you want to get in any performance, whether on film or stage.”

Johns admits he had no inkling of the impact the film would have. “Because it was my first film I had no idea how much it would resonate with people. It’s got 28 awards worldwide including the Palme d’Or in Cannes," he says. "The first idea I had was at Cannes when they showed four press screenings on the Thursday before we had the premiere and people were talking about the reaction of the press, people were in tears and I thought ‘Oh this sounds like something different’ and then it had a momentum of its own.

"I had no idea beforehand I just thought ‘Wow I am going to be in a Ken Loach film’, that for me was pretty cool I never thought it would have the impact it did. Going to Cannes and the BAFTAS and having really famous actors come up and tell me they found my performance so moving was a shock. When Mark Rylance who I think is an unbelievable actor, comes up and says your performance was so well measured and so real it blows your mind and was quite humbling”

Johns has three new films due out next year; Walk Like A Panther, Trautmann, and Two Graves. “Ken’s film has given me a film career at the age of 62,” he notes. “At the age of 62 I won an award for Best Newcomer at the Empire magazine Film Awards. The big new one is Walk Like a Panther about wrestlers who come out of retirement to save their local pub – it’s in the same vein as comedies like The Full Monty and Brassed Off. That’s due to be released in March.”

“Ken Loach has used a few comics in his films,” Dave observes. “He says that comics are very good at communicating with an audience. When you go onstage as a comic you are on your own and you have four or 500 people in front of you and you have to connect with each one of them. Ken said comics are good at communicating and you can get a truth from them and that’s why he likes using them. To me there is a warmth, all me and Hayley were doing in each scene was listening to each other; if you listen to each other you find the truth and the emotion will be real and will show on screen. It sounds simple but I have taken that advice and used it in each of the films I have made since then.” 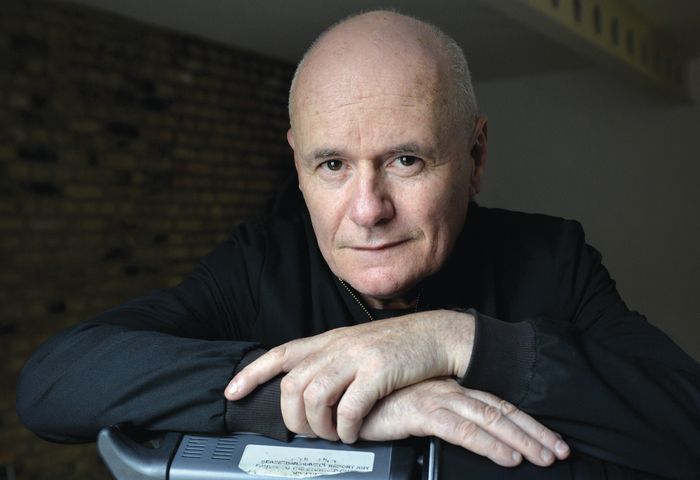 Dave Johns will feature at three events in the Vodafone Comedy Carnival. On Saturday October 28 at 4pm, he guests with the Stephen Frost Impro All Stars and, at 8pm that evening, he togs out again to join Tommy Tiernan, Foil Arms and Hog, Paul Currie, and Andrew Maxwell. On Sunday October 29 he shares the bill with Kevin Bridges, Rich Hall, Lords of Strut ,and Steve Bennett.

He concludes our chat with his insight on doing improv: “The thing about improv is even though each scenario in each show is different in what you see the performers creating in front of you, there are structures that you work inside which keeps the narrative going. Because we’ve worked together for a lot of years we have an affinity with each other onstage. We trust each other; you know if you don’t come up with something funny one of the others will and that gives the show momentum and excitement. We’re in tune with each other and that’s what you need from performers onstage together, and to have imagination so the show can absolutely fly.”