She has achieved renown as an actress, author, comedian, script editor, and memorable interviewer of celebrities but in recent years Ruby Wax has become best known as a highly articulate, yet still witty, mental health campaigner.

In two weeks’ time she visits the Town Hall Theatre with her latest solo show, Frazzled; a Guide to Mindfulness which offers a candid, entertaining and insightful guide into achieving saner living in a stressful world.

Wax was born in Illinois; both her parents had fled Austria to escape the Nazis. An only child, her home life was rendered fraught by her mother’s obsessive compulsive disorder and her father’s occasional outbursts of violence. As a teenager, to get away from them, she went to the UK and enrolled in drama school. She went on to work extensively onstage with Alan Rickman and, in 1978, joined the RSC. In the 1980s she broke through into television where she starred in Girls On Top, script edited Absolutely Fabulous, and interviewed the likes of Madonna and Imelda Marcos. While outwardly she seemed the hugely successful go-getter reaping kudos and rewards a-plenty; unknown to the public she also suffered acutely from depression.

“It started when I was still young but nobody knew what it was called then,” she tells me. “At first the doctors thought it was glandular fever; it felt like somebody had slipped some drugs into me and put me out of it. They didn’t think it was mental and of course there is no ‘mental’; mental is physical because your brain is part of your body. It was probably when I was a little kid of about six or seven that I first had an episode of depression but they didn’t really diagnose it until I had my first kid. The episodes would happen maybe every five years, not all the time but they could take you by surprise.”

How did she juggle a high flying TV career with dealing with these depressive bouts? “I used to make excuses. I’d say I had the flu or whatever. I didn’t have a 9-5 job so I was lucky in that I could skirt it. Eventually, I couldn’t skirt it but I did in the beginning because it only came along every few years and I didn’t have to work every day.”

Wax finally went public on her battle with depression after being ‘outed’ by Comic Relief who had asked could they use her image in a campaign on mental health. She had thought they just meant a pic in a brochure but she was in for a surprise.

“They put up posters of me saying I suffered from mental illness so then I had to pretend that I was doing that on purpose!” she recalls. “That led me to do my show Live from the Priory. Then another show happened after that which wasn’t really about mental illness at all. Frazzled isn’t about mental illness either; it is about all of us that are just feeling the general malaise of being bombarded by comparisons or these inner voices that taunt us saying we’re not good enough, we’re not keeping up with the next guy.

"This is everybody now. It’s a kind of general virus. The show is all about feeling frazzled. I talk about why we’re screwed up, about my mother; it’s a comic rollercoaster ride. The ‘mindfulness’ part comes in later on when the audience ask me to tell them all about this stuff that made us laugh. My mission is to keep it funny.”

The insights she shares in Frazzled are partly driven by what she learned completing a master's degree in mindfulness-based cognitive therapy from Oxford University. In 2015, she was appointed a Visiting Professor in Mental Health Nursing at the University of Surrey and in that same year she was awarded an OBE for her work on mental health awareness.

“I didn’t go to Oxford to study about depression,” she points out. “I studied neuroscience so I could understand why we think the way we think. I’m interested for instance in what makes you ask these questions and what makes me answer them like this. I really like how the mind works and that was my main interest. I like when they take my work in this area seriously but it always stays in comedy. I want to make people laugh; I am not a lecturer. I studied all this so I could use it for a comedy show. It’s the same way that Bill Bryson, whose work I love, tells you the most interesting stuff on earth but he still makes you laugh and that combination is what I’d like to achieve.” 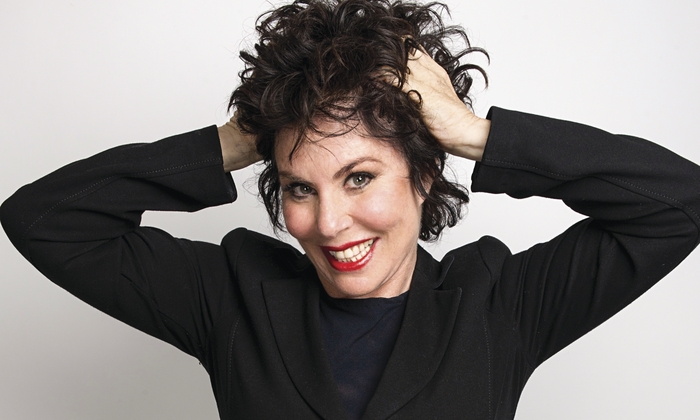 The show concludes with a Q&A session with the audience which in itself is often lively and revealing. “People like to communicate with each other and ask ‘is it ok that I am like this? I’m tearing my hair out!’” Wax notes. “People like to feel they are part of a tribe. I think because I’m honest that people feel relaxed enough to talk. I’ve created this kind of atmosphere which is now going into Frazzled Cafés that I’m opening.”

The Frazzled Café project is facilitated by Marks and Spencer who provide the meeting spaces for people wanting to use them. “It’s a growing enterprise,” Wax reveals. “We invite you to come and there is a facilitator and you meet every two weeks as part of a small group. It’s like AA but with people who are frazzled and just want to talk and say life is tough and they don’t know what to do about it. They don’t want to be a burden to their family or friends so they have this safe place to meet and talk.”

One reason we might all be feeling a bit more frazzled these days is the presence in the White House of one Wax’s famous interviewees; Donald Trump who she met in 2001. “I thought he was joking back then when he first said he wanted to be president but he wasn’t. It was like trick or treat and then it happened. If you think the world isn’t frazzled, then think again. Something has gone very wrong and then we blame it on other people but we did it –it’s us; we’re the world. So we have to think again, are we insane?!”

I remind her that in her somewhat testy exchanges with Trump he commented that Wax “was angry with a smile,” and I express my surprise he picked up on that given his massive self-absorption. “He was pretty vicious with a smile,” she replies. “He was lethal so I got scared and angry. It was interesting that he read that correctly. I didn’t like him on sight and I usually love the people I interview. In his case I thought he was vicious and dangerous.”

Wax winds up with some final words on Frazzled: “Everybody wants a bite-sized chunk that you can say in a sentence but I lead you in and show ways to train your brain. All you have to do is look at science; you don’t have to wave a crystal anymore! I give you the idea how to do that because the only way to survive is to upgrade our minds as much as we’ve upgraded technology, and there are ways, and as long as you’re funny you can teach people. I’ve done the show 80 times and people really like it so there’s no reason you won’t either, especially as the Irish really like to talk!”