THERE ARE still a couple of days left to catch the wonderful work gathered for the inaugural Galway Cartoon Festival which now runs until Thursday November 9, having initially being scheduled to finish last Monday.

The work is split between the Town Hall Theatre bar and the Black Gate Cultural Centre, on St Francis Street, and features more than 100 works by some of the finest cartoonists from Ireland, Europe and the US (15 countries in all are represented ) including Martyn Turner of The Irish Times, Martin Rowson of The Guardian, the inimitable Tom Mathews, the incomparable Joe Boske, Graeme Keyes of The Phoenix, Tom Tomorrow, creator of cult comic strip This Modern World, and Galway cartoonists Allan Cavanagh and Richard Chapman (Sergei ) – the latter being two of the prime movers behind the festival. And lest one assume cartooning is a male preserve, there is brilliant work on show also from gifted female artists like Sarah Walsh, Ciara Kenny, Miriam Wurster, Cristina Sampaio and Kellie Strom. 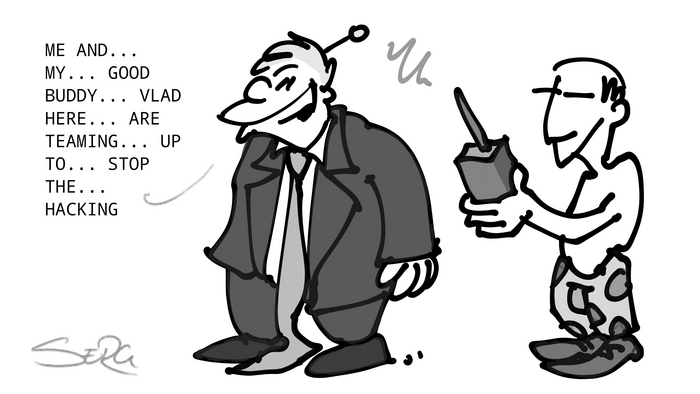 What we get is a feast of wit and whimsy, satire and surrealism, and scalpel-sharp commentary on the major issues and personalities of our times. Not surprisingly, Donald Trump gets some ferocious skewerings - including one by Harry Burton of The Phoenix which has just been shortlisted for Political Cartoon of the Year (Burton’s cartoon is in the Black Gate ).

I hesitate to describe the content of the cartoons as that would seem as self-defeating as explaining the punchline of a joke, but among those I greatly enjoyed were Kellie Strom’s Wonder Wagon featuring a Sinead O’Connor-type superhero in her own comic strip [see below]; Ivalo Tsvetkov’s striking caricature of Kafka as an insect; Adam Korpak’s bleakly funny Short History of Help, and Gatis Sluka’s The Ocean’s Inhabitants which depicts an aquarium display tank full of man-made rubbish.

Though it has arrived without much fanfare, this has been a hugely enjoyable and very promising debut from the Galway Cartoon Festival. With minimal financial resources the festival still pulled together a high quality programme in terms of both the personnel and the work. One looks forward keenly to its building on this auspicious beginning. I would urge readers, if they have not done so already, to check out the two exhibitions before they close. Most of the works are for sale and, with prices starting at €50, they could make great Christmas presents.