One of Galway’s best loved businesses is Ernie’s Fruit and Veg in Sea Road, which has been a central fixture in the west end community for more than 40 years. The shop was founded and is still run by Ernie Deacy, ably assisted by his son Ernest jr and daughter Annemarie, while his other son, Paul, owns Bell, Book and Candle just around the corner.

Ernie himself is a warm and affable man full of pride in his family and community. “I grew up in Saint John’s Terrace,” he tells me. “My dad Miko was a printer and my mum was Christie Morris - her family were dairy farmers in Terryland. There were nine brothers and my sister Mary. Sport was really big with the family; my dad and my uncle Christy were the first father and son to represent Ireland in fly fishing and my uncle Bobby was president of the IRFU. I was a member of Galway Golf Club for 25 years and I coached youth rugby.

"I also fish every day on the Corrib from February to September. My father and uncles and brother Niall played rugby for Galwegians, I played at minor level but was no good. I was a bad No 7! My uncle Jack was president of Galwegians and Connacht. My brother Eamonn of course played for Aston Villa and Derby County. I wouldn’t have been able to do the shop myself when I started. Eamonn used to come in every day in the morning before he started school. He never took a penny off me in the first couple of years. I couldn’t have existed without him and my sister Mary. He was an unbelievable talent and person, there wasn’t a bit of badness in him, we’ll always miss him.”

Recalling his childhood, Ernie says: “We’d take our dogs up to Boland’s Wood to chase rabbits where the Ardilaun is now and Lydons Field before Pearse Stadium was there. The nice thing about a street environment was we always had seasons; there were seasons for playing cowboys and Indians, for climbing trees, for playing handball and marbles. The west end is a lovely area, like a village in the middle of a city. I remember as a kid we’d be swimming in the ‘middle river’ beside St Patrick’s school or we’d swim at ‘the councillors’ as we called it, in Salthill between Grattan Road and Seapoint.”

Ernie left school early and was working before he was in his teens. “I left school at 12 and a half, I remember my mother saying at the time, 'School is not for you, Ernest.' I started working delivering milk and then I was a telegram boy and then I worked as a commis chef at the Great Southern hotel for five years, I cheffed in the Odeon and Eglinton, at the Eglinton I met one of the greatest teachers I ever had, a chef called Pat Flanagan after learning from him I was able to be head chef.” 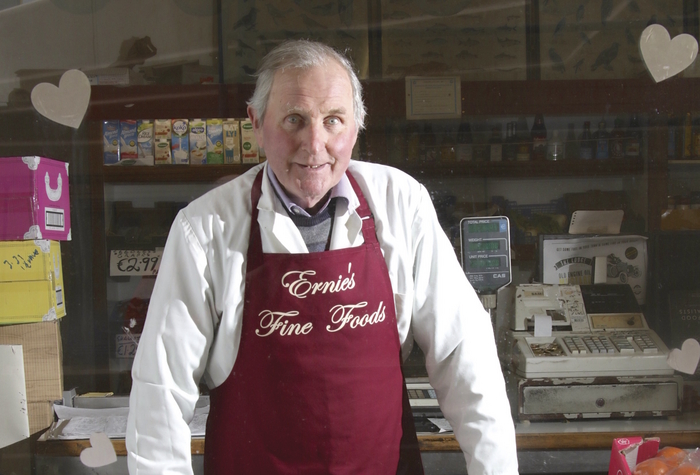 It was while cheffing at the Corrib Restaurant that Ernie met his wife Margaret; “Margaret is from Ballinrobe and she was working in banking in England, but she’d come home and took a job as a cashier at the Corrib and that’s how we met. She does all our book keeping and accounts now.”

In the 1970s, Ernie left cheffing to start work as a grocer. “My grandmother Polly and granddad George opened Deacy’s High Street shop in 1910,” he reveals. “They sold furniture and 78s records originally, George was an agent for labels like Parlophone and Columbia so you could order records from him. In the 1970s I was working as a chef in the Ardilaun and my uncle was running the High St shop but he had a heart attack so my brother Michael took over the shop and he asked me to come and help out.

"I was there for a year and then decided to go out on my own, and John Callanan at the Bank of Ireland gave me the money to get premises on Sea Road. At first I had the shop beside where I am now but then the other place went up for sale and the bank lent me the £63,000 to buy it. For the first 15 years I didn’t take a day off, I worked seven days a week.”

Over the years Deacy’s has changed to keep abreast of shifting times while holding on to the same core values it had from day one. The shop now stocks a huge range of foods to suit all special dietary needs, without compromising on taste.

“We branched out as the kids got older and food changed,” Ernie explains. “Galway has changed so much in 40 years. People’s eating habits have changed and you have so many people coming into the country from overseas with their diets and cuisine. Only for my son and daughter coming into the business I wouldn’t have been able to do it, they had the imagination to broaden our stock. With the variety of produce we have now the least we have is fruit and veg, we have hundreds of teas, sauces, dried products and other items.”

Last year Ernie provided the narration for a charming video extolling the appeal of Galway’s west end and his affection and pride for the area shines forth in his conversation; “It’s a little village in a city and we have a beautiful city. I’d personally like to thank our city manager Brendan McGrath, I think he’s doing a great job. There’s a beautiful walk and very few people know it, it’s a hidden gem, from Wolfe Tone bridge along the canals up to NUIG, my own favourite walk is from Raleigh Road to Threadneedle Road. We have a lovely area here. Nearly all the businesses here in the west end are owned by the person that is serving you. Everyone that came into the area has brought something in and it’s a lovely place to be.”

Ernie himself and the Deacy family have done much to contribute to the west end’s charm and long may they continue to be a valued presence in the locality.