LISA HANNIGAN comes to Seapoint next week on the crest of a wave with her new album, At Swim, enjoying universal critical acclaim. Produced by The National’s Aaron Dessner, the record follows her double-platinum, Mercury, and Choice Music Prize-nominated debut Sea Sew, and 2011’s chart-topping Passenger.

At Swim sees Hannigan strike out in new directions, aided by Dessner’s spare yet sensitive arrangements. Titles like ‘Prayer For the Dying’, ‘We the Drowned’ and ‘Funeral Suit’ attest that the mood can sometimes be sombre but the songs here are also beautiful and even uplifting. In the gorgeous love song ‘Snow’ the lovers are transformed into the falling snow and the city they are walking through till they are ‘sunk like treasure’.

I caught up with Hannigan last week by phone a couple of hours before she was due onstage in Zurich, and began by stating that she must be feeling very gratified by the album’s many rave reviews. “Yes, because when you’re so in the middle of making a record you’ve no idea whether anyone else will enjoy it,” she replies. “It’s always very nerve-wracking no matter how much you like it yourself. When you send it out for other people to listen to there’s always a bit of trepidation. On the whole the response has been brilliant so I have been very heartened by it.”

Remarkably, Hannigan struggled at first to write the new material for At Swim. The breakthrough came when she got an email out of the blue from Aaron Dessner, whom she had never previously worked with or even met. Taking up Dessner’s suggestion to work together freed her creative logjam; “It was the beginning of 2015 when Aaron emailed me,” she recalls. “I had about half the songs at that stage but I definitely was perturbed at how long it was taking me, I couldn’t seem to get into a flow so that was hard. But then that email from him out of the blue was such a godsend. It was just fun then that we could send songs back and forth to each other, it was a fun and interesting exercise as opposed to me sitting down every morning and feeling ‘oh God, I can’t write a song’ so it helped me get my own momentum confidence back.”

She enlarges upon her song-writing routine and that experience of writer’s block; “If you sit around waiting for inspiration you’re never going to write anything. I usually would get into a flow where I’ll write a bunch of songs in a go but this time because it didn’t seem to be happening I started making more concerted efforts. I would sit down at nine in the morning with my blank page and try to write diligently and I would do lots of exercises. Anyone who is a writer has had problems at some point. I listened to all the advice I was given but you just get through it eventually. At least with song-writing they are very short bursts of thought that are distilled into a song. Whereas if it was a novel with sustained physical labour I’m sure writer’s block is very tricky. Every once in a while I would write a song and I’d be filled with a sense of satisfaction – for a while! It’s a tricky biscuit, I don’t even know if I would call it writer’s block but it certainly wasn’t as easy as I had found it in the past.”

I ask Hannigan about the dynamic between herself and Dessner. “He sent me loads of pieces of music, he’s incredibly prolific,” she replies. “I was just listening to the stuff he sent and I’d find myself humming along. There’d be things I’d find myself immediately having a feeling for, I’d start singing and have a melodic connection to them. There were other ones where I didn’t feel that so much so I focused on the ones I felt that connection to. It was an easy sort of fun musical pen pal situation between the two of us.” 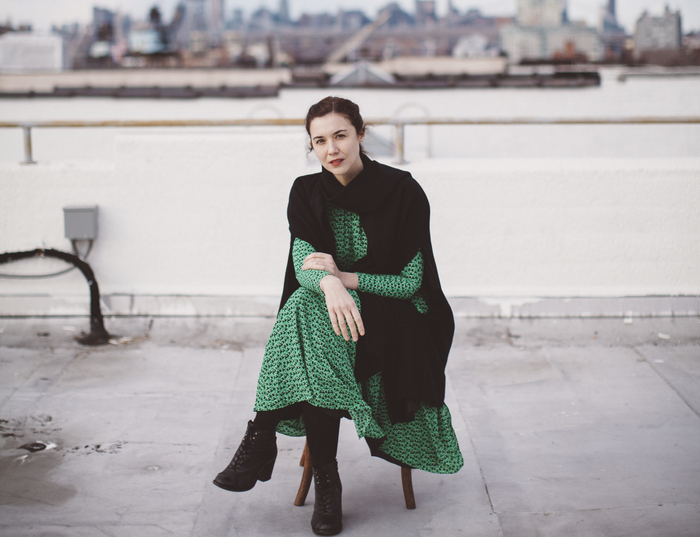 One of At Swim’s innovations is that it sees Hannigan sharing the song-writing credits on several tracks. “I’d never really written songs with people before and I have quite a few co-writes on this album,” she admits. “It was fun to open myself up to that way of working. My friend Joe Henry sent me most of the words to ‘Fall’. That was a revelation to me because I had always agonised over the words but when you’re working with someone like Joe who has all of the beautiful words that was incredibly freeing. I learned that I don’t have to agonise over that bit as long as I feel that connection with someone else.”

While ‘Fall’ is the album’s opening track, the first song which she wrote for it was ‘We, The Drowned’. She tells me about it: “I was feeling quite low at the time. That song is sort of about self-sabotage and how we as human beings often choose the wrong thing for ourselves. We look in the wrong places and we make the wrong choices against our own interests and just the frustration of how we’re our own worst enemies in so many ways. I began to play it at shows at the end of the tour for my last record and I could feel that it worked with an audience and that was very heartening in terms of going in to make the rest of this record.”

Aquatic allusions and imagery recur throughout the album, though Hannigan points out this wasn’t a schematic intention. “That theme and that sense of being adrift and being taken over by something bigger than yourself only emerged after all the songs came together, and in retrospect you look back and see they all hang in this area and definitely that theme is a strong one through it, but unless you’re doing a concept album you never really know what it’s about until it is done.”

One other notable track is Hannigan’s lovely a capella version of the Seamus Heaney poem ‘Anahorish’. She describes how it came about; “That started out during my difficulties when I was trying to fill my brain with beautiful words. I was reading a lot of Heaney’s poems and came to ‘Anahorish’ and it looked just like a song on the page and as an exercise, because I was finding difficulties writing, I decided to try and set it to music. I just loved it so much, I love singing it on my own or with people in the way that it ends up on the record. For me, I felt that the poem resonated with the other songs on the record in the way that it seems to be about memory and the sense of place, the sense of home and belonging. I was so happy when his family said I could put it on the record.”