AMONG THE many colourful characters rocking up in Galway for the Vodafone Comedy Carnival, few are more colourful than Eddie ‘the Eagle’ Edwards, the unlikely star of 1988’s Winter Olympics in Calgary and Great Britain’s first-ever Olympic ski jumper.

Eddie The Eagle – passport name: Michael Edwards - missed out on the medals (by a mile! ) but won the hearts of the world with his plucky have-a-go spirit and self-effacing persona. When he returned home to England he realised he had become an overnight celebrity…at which point his life became extremely strange.

His show, The Eagle Who Dared, which comes to the Town Hall Theatre, is a family-friendly autobiography live on stage, featuring never-before-told tales, a blizzard of hilarious anecdotes, and more ups and downs than a self-taught Olympic ski jumper (ranging from TV game show Celebrity Squares to bankruptcy, through facial reconstruction and divorce to being affirmed as a national treasure ). Eddie’s unique story of flying against-all-odds shows what is possible when you dare to follow your dream.

Earlier this year Eddie’s life story and remarkable Olympic adventure was celebrated in the Dexter Fletcher-directed big budget film, Eddie the Eagle, which was greeted with rave reviews ("a classy, comic tale," The Guardian; "a solid gold winner," Empire ). When I catch up with him for a chat ahead of his Galway visit I begin by asking if he was happy with how the film came out and if he had much involvement in the making of it.

“Oh yes, very happy,” he declares. “They did a fantastic job. I first signed the deal for a movie about my life 17 years ago but the project just kept stalling. I sat down then with the script writers and went through my life story. When Dexter decided to buy the rights I met with him and sat down with Taron Egerton, who played me, so I did a little bit with the movie. I was on set a few times as well but I let them largely get on with it. I didn’t think the film was ever going to be made but I’m glad it was in the end. I think it was because of doing ITV’s Splash!, the celebrity diving contest which I won, in 2013. Dexter Fletcher saw me in that and thought there was a story there and he got involved.”

A plasterer by trade in his native Cheltenham, Edwards was always a passionate sports person. “I did lots of different sports; football, cricket, rugby, tennis, judo, karate, volleyball. I loved all sports. I was ski-ing since I was 13 and my family and friends would have known me mainly as a skier. When I said I was going to try and qualify for the Olympic ski jumping they all thought I was nuts but they encouraged me to go for it too, so I did.”

“It was extremely terrifying, but it was great fun too,” he says of his early attempts at doing ski jumps. “I was quite a good skier so that helped and then it was just a case of trying to get used to those big jumps. I was always scared but just scared enough to make me concentrate, not so scared that I wouldn’t do it.” 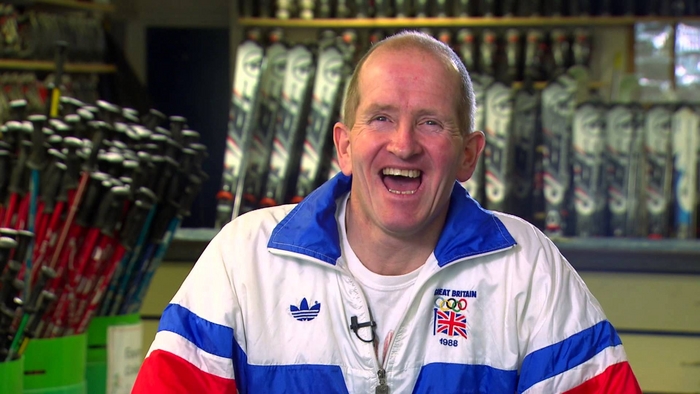 These days athletes all have sponsorships and endorsements but Eddie’s path to Calgary was negotiated on a wing and a prayer. While training in Finland he had to lodge in a mental hospital as he could not afford to stay in a hotel. “I had no funding or sponsorship,” he recalls. “At times I slept in the car and I slept in cowsheds, it was hard, but the hardship just added to the mix; if I’d had an easy run going to Calgary I probably wouldn’t have got as much attention.”

Eddie may have been rock bottom of the rankings once the jumps started in earnest at Calgary but his plucky underdog story caught the imagination and saw him hit headlines around the world. How did the other, more illustrious, ski jumpers react to his being lionised by the media? “All the other jumpers loved it because the attention that was being thrust upon me was also being thrust upon ski jumping,” he points out. “They thought it was fantastic because it took the sport from page 47 in the newspapers to page one. There were one or two jumpers who didn’t like it, because they had the attitude of ‘I’m the best jumper in the world so I should be the most popular’ but the other 95 per cent loved it.”

'My feet didn’t touch the ground for about two years'

Edwards’ helmet, fastened with string, fell off during one of his jumps and he joked afterward that he was annoyed because the helmet managed to go 40 metres further than he did. He reveals an admirably resilient and philosophical attitude to finishing way behind the other jumpers; “For me, every competition I went into I tried to jump further than the competition before. So my battles were to jump as far as I possibly could. I knew I wasn’t going to beat anybody, especially in Calgary. I’d only been jumping for 20 months when I went there; everyone else had been doing it for 20 years. For me just getting there was the greatest thing.”

I suggest the sudden onset of fame and celebrity status that hit his life as a result of Calgary must have been quite a culture shock. “Yes it was,” he agrees. “When I first went to Calgary nobody knew me and then two weeks later the whole world knew who I was so it was a bit of a shock allright. But it was good fun, I travelled all over the world opening shopping centres and golf courses and hotels and having a whale of a time, though it was not something that I’d been anticipating or particularly wanted to do. I was forced out of ski jumping after Calgary so the only route open to me was to be a celebrity and make money that way.

"My feet didn’t touch the ground for about two years; I was flying here, there, and everywhere business class. It wasn’t difficult to do and as I was earning from £5,000 to £10,000 per hour. I tried to work as much as I possibly could!”

Despite his time as a celeb, Edwards still comes across as warm, personable, and down to earth and one imagines he would make a genial storyteller as he recounts his many adventures and encounters in The Eagle Who Dared.

“I talk about my life as Britain’s first and last Olympic ski jumper and tell people the stories about the fun things that happened on the way to Calgary and what happened there. I also say a little bit about what I have done since. I talk a bit about the movie as well. I want to entertain people and make them laugh and also make them think – why did someone have to go through what I went through to get to an Olympic games.”

Finally, does he still ski I ask? “Oh yes, I still ski recreationally,” he replies. “I was in Belfast last weekend launching the ski season for Vertigo, the artificial ski slope, which is brilliant. I ski at my local indoor ski slope, Tamworth and Milton Keynes, and I’ll be going away this winter to ski for real. I still love getting on my skis.”

Eddie Edwards, The Eagle Who Dared, is at the Town Hall Theatre on Saturday October 29 at 3pm. Tickets are €18/12 via www.vodafonecomedycarnival.com