Doug Allan would make a dream dinner guest with his fund of stories from an eventful life. He has travelled all over the world, from the Andes to Africa and from the Antarctic to the Arctic. He is a wildlife cameraman and has had close encounters with whales, sharks, and polar bears. His screen credits include classic David Attenborough series like Blue Planet, Planet Earth, and Life in the Freezer. And finally, he is a compelling and charismatic speaker.

On Tuesday November 2 at 8pm, Doug brings his new show, In the Company of Giants, to the Town Hall Theatre. In it he shares his unique insights into filming the biggest animals in the wildest places on Earth for an evening of memorable adventures and unforgettable footage.

“I describe myself as an analogue adventurer,” Allan tells me in a gravelly Scottish accent. “I was born in Dunfermline in 1951 and in my formative years I remember reading Jacques Cousteau’s Silent World and about the Kon-Tiki expedition and the ascent of Everest. The 1960s were an amazing decade in terms of exploration; we were pushing out into space, but we were also pushing out underwater in ways that we hadn’t done before.

"At the same time, it was all pre-digital and that gave it a simplicity that even young folk could connect with. When I took up diving it was because I was attracted to the adventure of it, and my interest in the sea drew me to marine biology. After my degree a desire for bigger adventures took me to expeditions on the Red Sea and running a dive school.”

A chance magazine article set Doug on a fateful new direction. “One day I read an account in a diving magazine of a person who’d worked in the Antarctic," he says. "After reading that article I wrote to the British Antarctic Survey and got a job as a diver for a year. The Antarctic then, in 1976, was far more remote than it is now; communications were much more basic and life there was very different. It was pretty isolated through the winter, there were only 15 other people on the base.

"The way the survey was run we had a lot of leeway, when not working, to go and explore the island on our own. Everything about it was perfect for me at that stage of my life. It was exciting, it was new, it was challenging. It was tough physically and mentally but I didn’t mind that. I felt like I was doing something worthwhile in my job, I was supporting three or four biological programmes –the people relied on me to collect their animals and things. The whole experience was utterly unique.”

Over the next 10 years, Doug spent four winters and nine summers in the Antarctic. Since 1988 he has also worked extensively in the Arctic. “It’s true to say I have had a love affair with ice,” he declares. “I am familiar with ice, whether that be as a glacier 10,000 feet up a mountain or walking out on to a frozen sea. When I look at sea ice I can tell where the thin areas are, I can tell lots about it and can cope with the cold. When I took up filming that was the area I wanted to specialise in. There was so much that hadn’t been filmed in the Arctic and Antarctic when I took it up.”

It was while working in the Antarctic that Allan took up photography and it was here also that he first met David Attenborough. “One day we got a radio call from HMS Endurance saying they had a BBC crew on board who would like to visit our base,” he recalls. “We said ‘fine’ and David, his producer, cameraman, and soundman disembarked. For two days I was their guide and it was a real eye-opener. They were doing with movies what I was trying to do with stills, which was to communicate the loveliness and uniqueness of the place.

"One of the things that attracted me was that they were working as a team whereas stills photographers tend to work solo. At one point David said to me ‘We know lots of people who know Africa like the back of their hands but you’re the first person we’ve met who knows the Antarctic like that. Specialism is a really useful thing.’ I put that away and it took a while but 10 years later David and I were working together on Life in the Freezer.” 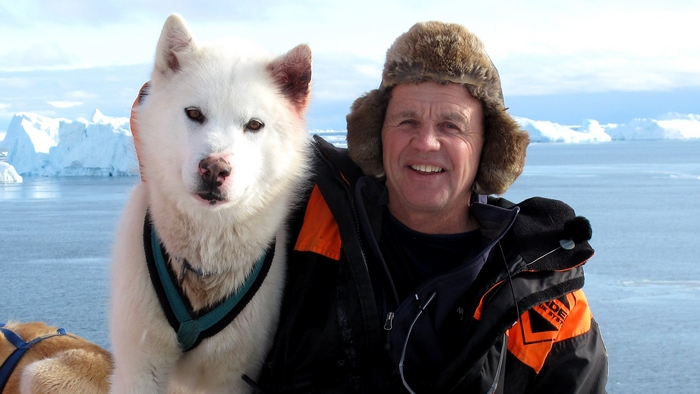 What is it like to work with Attenborough? “David is wonderful,” Doug enthuses. “What you see on television is what you get in real life; a man who’s enthusiastic, knowledgeable, but at the same time humble, friendly, and genuinely interested in other people. That makes him wonderful to work with. He also never complains about the animals not turning up or the weather or anything like that. He will quietly let you know if you haven’t organised things as best as you could, he has no time for unprofessionalism. He’s a wonderful communicator; he knows how to talk at length to the level of his audience; he can talk to a five-year-old or a head of state. I consider myself very, very, lucky to have contributed to some of his series.”

Unsurprisingly, Allan is deeply concerned about global warming having seen its effects first hand. “The part of the world showing the greatest signs of climate change is the Arctic. The Arctic has a massive influence on the oceanography of the north Atlantic. If the Arctic ice were to melt the Gulf Stream would weaken and we’d get much colder water around the UK and Europe, so the outcome of global warming could actually be Europe getting much colder.

"If we lose the sea ice animals like polar bears, seals and walruses will be adversely impacted and it would change the whole ecology of the far north. I have seen these changes; when I went up in 1988 I caught the end of the stable period; the ice wouldn’t start breaking up until June but today the ice breaks up sooner and less predictably. Sometimes it’s not forming until much later and there are much milder autumns.

"Huge changes are under way. That’s impacting on the environment but it is also allowing the development of the north, there’s now exploration for oil which is a further possible threat to the Arctic. Ships are able to go all the way across the Arctic ice because it’s so thin and in summer you can go direct from Europe to the Far East. If that carries on we could have a major new trade route developing which some might say is a good thing but it could be dangerous as well.”

Finally, I ask Doug if he has a special favourite memory from his many memorable animal encounters? “I’ll always remember the first big whale I met,” he replies.

“Early in my career I was in Argentina filming southern right whales. I was filming this female and I was waiting for a shot of her swimming over the top of me. I saw this big shape coming out of the shadows and it was this whale and she came and stopped right beside me with her eye just level with mine. I don’t know why, because you don’t normally touch an animal, but I felt that she wanted me to somehow make contact so I gently put my hand on her head and started rubbing her and it was like rubbing a dog between the ears.

"This whale weighed maybe 30 tons, but when I rubbed her a bit then eased off you could feel her pushing her head back against my hand as if she wanted more. I rubbed her for five or 10 minutes then made to go to the surface and as I did so she swam round and put her snout right in the middle of my chest and gently began to push me through the water. As she was pushing me I rubbed both sides of her head with my right and left hands and it must have been bliss for her because for five minutes or so she just pushed me around in the water. When you have a 40 foot whale very gently doing that with you it is a great way to start your career!”