CHRISTMAS IS almost upon us and along with the mince pies, roast turkey and a beardy fat man in a red suit, Galwegians can also look forward, as always, to the Renmore Panto. This year’s offering is Jack and The Beanstalk, scripted by Panto Dame Peter Kennedy and directed by AIMS award-winning twins Brian and Seán Power.

In the panto we meet the colourful Queenie Bean (Peter Kennedy ) who runs the Sunshine Variety Theatre, which is under threat of closure by the wicked Lady Feeona (Róisín Egenton ) and her side-kick Finny (Kevin Murphy ). Queenie and her son Jack Bean (Richard Brown ) must find a way to save the theatre, with the help of Rosie Moonbeam (Tara Spelman ).

Ultimately, to save the day, Jack and his friends must defeat the fearsome Giant Ming (Kevin Griffin ), who lives atop the Beanstalk with his servant Batty Breda (Katie Creaven ). It all adds up to a spectacular adventure of laughter, music, dance and song which promises to be a highlight of the holiday season. Taking the role of the panto villainess, Lady Feeona, is Renmore debutante Róisín Egenton, a native of New Jersey and former winner of the Rose of Tralee.

“I grew up in Fanwood, about 30 miles from Manhattan,” Róisín tells me over an amiable afternoon chat. “Ours was very much an Irish family. My dad is from Meath and my mom is from County Limerick. We always had Irish friends and family coming around to the house. We had aunts and uncles living in New Jersey as well so we were part of a large Irish community. We also used to come over to Ireland to visit relations whenever we could so we had a real sense of connection with Ireland from the time we were kids.”

Róisín’s connections with Ireland, and Galway, were further strengthened when she won the Rose of Tralee in 2000. “After winning the Rose, I came to live in Galway with my aunt, my dad’s sister, in Renmore,” she relates. “Then I got my own place a few months later – being a girl of 23, it’s nice to have your own spot!” she adds with a laugh. “I did a master's in healthcare promotion in NUIG and shortly after that, in 2005, I moved down to Kilkenny. I was there for five years and I moved back to Galway in January, 2011.” 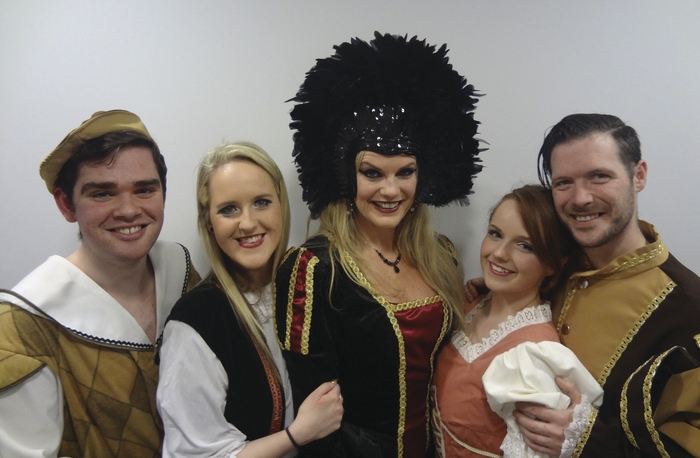 While in Kilkenny, working for the HSE, Róisín also found time to tread the boards, winning the AIMS (Association of Irish Musical Societies ) Award for Best Comedienne for her role as Ado Annie in Kilkenny Musical Society's production of Oklahoma! After her return to Galway – where she continues to work with the HSE - it was no surprise that she enlisted in the local musical societies, enjoying lead roles in productions of Anything Goes, Hairspray, and Annie. Róisín’s involvement in the Patrician Musical Society’s 2013 staging of Guys and Dolls would prove particularly memorable for her as the cast also included husband-to-be Nicky Lawless. “That was when we first met though we were only friends during the show,” she tells me. “It was later on in the summer that we met at a mutual friend’s get-together and started going out together.”

The couple got married this September and now they both feature in the cast of Jack and The Beanstalk. Róisín is revelling in the show; “I’m absolutely loving it,” she enthuses. “Firstly, it’s my debut with the Renmore Panto and it’s also my first time ever playing a baddie. The Renmore Panto is such an institution in Galway, the show runs for 19 performances and everyone talks about it all around town and goes to see it. You have to audition for it so it is a tough enough process to get selected and I feel very privileged to be part of it.”

Róisín expands on her character Lady Feeona; “She gets up to all kinds of dastardly schemes. She claims to own the land that the Sunshine Theatre is on. The Sunshine Theatre is owned by Queenie Bean, played by our wonderful Dame, Peter Kennedy. Lady Feeona wants to evict them from the land in order to build her own empire so she is trying very hard to get rid of them. Queenie and her son Jack have to sell their cow to raise the rent so Feeona won’t evict them but when they go to market Jack ends up selling the cow for a bag of beans which turns into the famous beanstalk. A lot of the panto follows the familiar fairy story but of course there are lots of local Galway-isms thrown in there and lots of fun for the kids too.”

One of those Galwayisms is the panto character Harold James, whose name uncannily resembles that of city arts officer, James Harrold. “I love the way Peter puts that twist on it,” Róisín chuckles. “So many people are familiar with James Harrold, he’s so well known in Galway and has done so many shows himself and it is great to have that twist on the name and bring that local flavour to the show.”

'The Renmore Panto is such an institution in Galway'

The musical numbers are always a highlight of the Renmore panto and I ask Róisín which big show-tunes she’ll be singing. “Things are still being tweaked but at the moment I am singing a Christina Aguilera song ‘Fighter’ and a Pink song called ‘Trouble’,” she replies. “They are both gutsy, dark songs so I can really get into being the baddie as I sing them and dance, and we have a wonderful troupe of dancers as well. Actually, the hardest part for me in the show has been working on my evil laugh, which doesn’t come naturally. I’m more used to giggling, not doing a malicious Devil Wears Prada kind of laugh!”