A GRIPPING true drama of shipwreck, cannibalism, and survival comes to the Black Box Theatre next week in the shape of the musical drama, The Unlucky Cabin Boy. Devised by Gúna Nua Theatre Company with playwright Mike Finn and The Brad Pitt Light Orchestra, the show tells the story of teenager Patrick O’Brien of Limerick.

In 1835, O’Brien signed aboard The Francis Spaight as a cabin boy on its voyage to the New World. During the ship’s return voyage from New Brunswick, it encountered a terrible storm and capsized. Several crew members drowned but the remaining sailors were able to right the ship by cutting the mast. However, they were now utterly stranded in the vast ocean; their provisions, water, and possessions having been lost overboard.

After two weeks of struggling to survive in grim conditions, the crew were driven to desperate measures. Captain Gorman resolved that one person should die in order to prolong the lives of the others. Lots were drawn, Patrick O’Brien’s name was chosen and he was killed and eaten by the crew. Two other crew members were subsequently killed and eaten before the remaining sailors were finally rescued by passing ship.

‘Customs of the sea'

This chilling tale of hardship, sacrifice, and the will to survive is brought to life by the compositions of The Brad Pitt Light Orchestra, known for their smooth combinations of guitar, keyboard, double bass, violin, percussion, and richly textured harmonies. Crossing musical genres, the catchy melodies and compelling lyrics of David Blake are integrated into the play, and The Unlucky Cabin Boy is brought to life by their vibrant lyrics and original arrangements.

During a break in rehearsal on Monday afternoon, Blake told me how the show came about: “My wife was researching post-colonial literature and came across it in an account of cannibalism at sea. We had been looking for something we could work on for Limerick City of Culture and when she told me this story I was blown away by it, particularly as it was a local thing.

"We learned there were so-called ‘customs of the sea’ pertaining to cannibalism because it wasn’t especially uncommon. We decided to go with the story and it had such strong historical and local elements the obvious man to approach to write the script was Mike Finn and he was thrilled to get involved in it as he had read the story himself years earlier. We then got in touch with Guna Nua Theatre Company and Verdant Productions and they came on board as well.

"The music is very much stitched into the show, there are songs, then there are pieces of music underneath the dialogue so it is all intertwined. We wanted it to work in such a way that the music doesn’t interrupt the action. I found it great fun writing songs in different genres, some of the music is contemporary but there are also sea shanties, old hymns, traditional Irish airs, and so on.”

The Brad Pitt Light Orchestra are well known for straddling musical genres but how did Blake find writing all the music around the central themes of the show? “I really enjoyed that,” he declares. “I read as much as I could about the story, myself and Mike and the band all exchanged bits of research. While the music deals with the specifics of the story it also engages with other themes we were looking at as well, such as emigration.

"There are also a huge Biblical parallel, the sacrificing of one and eating thereof, so we honed in on aspects like that as well as other historical events of that time. For instance, there is a ballad I wrote in the show about two ships who sailed out of Limerick a year before The Francis Spaight which were shipwrecked causing the deaths of nearly 500 people.”

Blake explains how the BPLO fit into the show performance-wise. “The band are onstage and some of them have quite prominent acting parts in the show while the actors also sing. There is a designated band area but we move in and out of that. Some songs are performed with a full band sound while others might just feature a clarinet and acoustic guitar.”

'We don’t know exactly what happened' 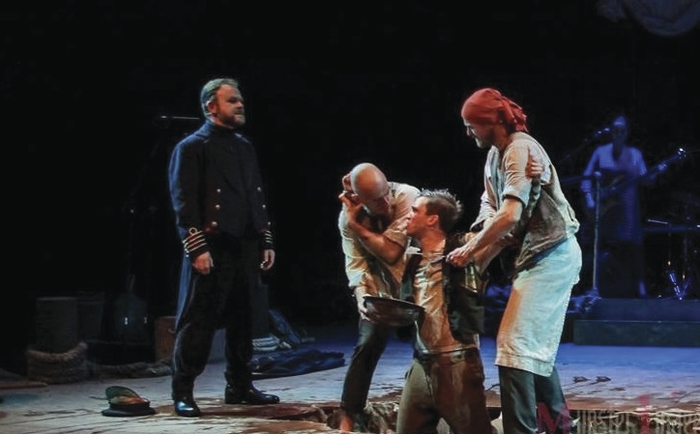 Playwright Mike Finn (author of Pigtown ) reveals how he got involved in the production; “I knew the story already because I remember one of my history teachers mentioning it in school and Jim Kemmy also wrote about it in The Old Limerick Journal. It had been in the back of my mind to do something on it so when the Brad Pitt Light Orchestra approached me saying they’d found the Patrick O’Brien story and wanted to do something I thought Wow, this is a match made in heaven!’ The show is essentially a musical but the subject matter is not the kind of storyline you would normally associate with a musical - Anchors Aweigh it’s not!”

Given it was the survivors who told what happened after their rescue how sure can we be that they were telling the truth? “We don’t know for sure at all exactly what happened,” Finn admits. “That is one of the intriguing things about the story. We know the basic story before the show starts, that Patrick O’Brien was killed so that the others could survive, but big questions remain as well. When they decided to have a lottery the only people taking part in the lottery were the four cabin boys so straight away somebody is making the decision that this macabre lottery will be confined to just four people.

"The argument that the survivors made, which was not entirely unreasonable, was that the crewmen all had wives and kids so they had dependents at home. The loss of an adult male at a time before life insurance would have been catastrophic for the family whereas the four boys had no dependents. Of course the argument does seem more convenient if you are a man rather than one of the boys. There also seems to be a suggestion in some accounts that I have read that O’Brien wasn’t particularly liked by the other sailors so one could speculate that the draw might have been rigged against him. These are the kinds of thing we explore in the show, we don’t come down one way or the other, perhaps it really was just bad luck that his name was drawn.”

The show touches on the aftermath of the voyage as well as the grim events that made it notorious. “The play jumps backwards and forwards as regards the timeline of the story,” Finn reveals. “At the very start of the show we meet the now elderly Captain Gorman who is haunted by the memory of this cabin boy. Killing him is not something that would have been done lightly and it must surely have weighed on their minds afterwards.

"The records reveal that Catherine O’Brien, who was Patrick’s mother – she was a widow and Patrick was all she had in the world - spent much of her time following Captain Gorman round town and asking him for answers and he finally had to take out a court order against her for harassing him.”

The Unlucky Cabin Boy promises a gripping evening of theatre at the Black Box on Tuesday November 10 at 8pm. For tickets contact the Town Hall on 091 - 569777 or www.tht.ie