ART AND science, one based on subjectivity and a response to the emotions and imagination; the other the result of rational inquiry, study, and experiments to proving or disproving; would seem unlikely bedfellows, each requiring different sides of the brain.

Yet for the artists Andrea Fitzpatrick, Joanna Hopkins, and Siobhan McGibbon, there is a meeting place between the experiments of the arts and the experiments of science, of their methodologies, and the new horizons both can open up for the imagination.

All this comes together in The Future Is Here exhibition which is currently running in the Galway City Museum, and the works on display are themselves a result of The Chimera Art and Science programme - a CÚRAM Centre for Research in Medical Devices, and NUI Galway based project - which unites artists and scientists, and encourages them to develop a visual arts research project within the CÚRAM laboratories, exploring experimental practice, with the artists given full access to the labs and staff.

Chimera was founded by Andrea Fitzpatrick, who is also its director and programmer, and the inspiration for it came from a simple stroll down the corridors in CÚRAM and "seeing lots of interesting bits of machinery and people working with microscopes".

"The things, which may seem mundane to scientists, were fascinating to me and I knew artists would be interested too," Andrea tells me. "The medical device industry is a growing one in Galway and it seems obvious to couple it with the visual arts, which are especially strong in the city."

Andrea chose the name Chimera as it corresponded with both the imaginative - it is the name of a mythical beast with the body of a lion, the head of a goat, and a snake for a tail - and the scientific - it is a term in genetics for a single organism which has genetically different cells.

As director and curator, Andrea chose the artists for the programme, selecting Joanna Hopkins and Siobhán McGibbon. This saw both artists based in the CÚRAM laboratories, and shadowing researchers in whose work they were interested. The project was supported by CÚRAM director Prof Abhay Pandit, and funded through the Science Foundation Ireland Discover Programme.

"The benefits for the artists are that they were creating work for the exhibition and their own research," says Andrea. "The benefits for the scientists of having artists in the lab changes the whole dynamic and atmosphere of a working environment. I believe it has changed many perspectives about what science and art can be."

Researchers who collaborated and helped the artists included Ghazal Tadayyon, Kyriakos Spanoudes, Catalina Vallejo, Rachel Ronan, Aniket Kshirsagar, Oliver Carroll, and others, and according to Andrea, they feel "pride and delight to know that they helped to make artworks happen".

Likewise it was a positive experience for the artsits. Says Joanna Hopkins: "I have a ongoing interest in psychology. Access to the CURAM labs allowed me to research this area further with new methods I would never be able to access on my own, ie, live video imaging of neurons, exploring new materials, and weekly discussions with scientists. I have never worked in lab environment before so it was an interesting learning curve for me. I really respect the discipline and perfection the scientists bring to their work."

Siobhán (one of whose works is shown below ) also found the collaboration fruitful: "Magical things can happen when you work with someone from a different discipline, where one person sees a problem the other can usually see the solution." 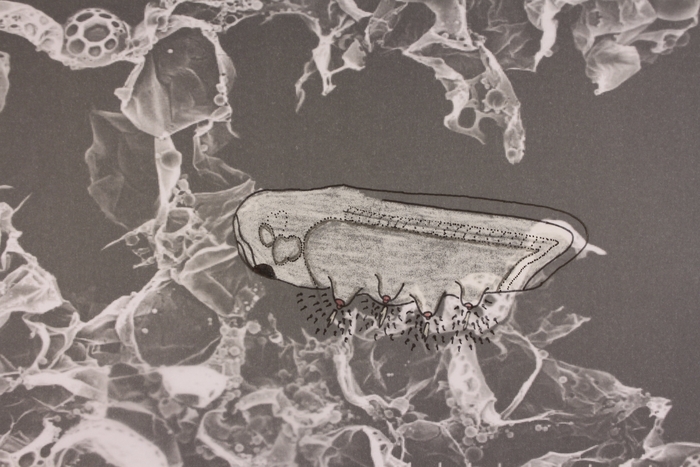 The Future Is Here - artworks inspired by science

So what kind of artwork has resulted from this unique collaboration? Joanna Hopkins' has two installations for the show, both of which require audience participation, exploring areas of the brain believed to be responsible for empathy in humans, such as the supramarginal gyrus.

"The first piece, Connections, encourages people to physically connect with each other in order to activate a video of brain neurons connecting. It comprises two plinths with objects placed on top, connected to a video that changes when the objects are touched by two or more people. Research shows that empathy is developed through physical contact and touch. This art work encourages that action."

"The Empathy Machine is a bit of a darker piece. It is a walk in booth big enough for one person, with a woman on a video screen waiting to greet you. You are allowed to talk to her and she is programmed to respond to you."

However Joanna has added an intriguing 'sting in the tail' to this exhibit. "She is programmed be a digitally glitchy version," the artist says. "She interrupts you when you speak, and doesn't really listen at all. It's based on facial and voice detection, with a series of pre-recorded prompts and questions, but is deliberately not touch interactive. I worked with a wonderful programmer called Alanna Kelly for this piece, who developed all the code for the piece. It plays on the idea that even though our daily interactions become more computer based, an on-screen persona may never replicate the empathetic nature of a real, live, human being."

Siobhán McGibbon will present a hypothetical narrative, inspired by the master writer of horror/sci-fi, HP Lovecraft, about creating a new species of human, merged with tadpoles and zebra fish. The works are created collaboratively with CÚRAM scientists, with materials used in the development of medical devices.

"My practice has always been concerned with notions surrounding the medical body. My fascination with the workings of the human body began at an early age and still continues to grow," she tells me. "I was particularly interested in two of the research groups that are exploring the regenerative capabilities of the tadpole and the zebra fish. I have been shadowing PhD researchers Aniket Kshirsagar and Rachel Ronan as they explore the regenerative capacity of the tadpole in the context of spinal cord regeneration."

The Future Is Here runs until December 23 and Andrea is encouraging the public to see it. "It's a chance to view a wide range of perspectives of what science is and what it could be – and to get excited by it." See thechimeraartandscience.com and curamdevices.ie