THESE RECENT winter nights have been grey and gloomy indeed, but all that should be dispelled by Ballet Ireland when the company comes to the Town Hall Theatre with its sparkling new version of much-loved comic ballet Coppélia.

Choreographer Morgann Runacre-Temple and librettist Stella Feehily have updated the ballet’s action to a 1950s American county fair, where we encounter Doctor Coppelius and his glamorous protégé Coppélia. Fair attendees Franz and his reporter fiancée Hildy are intrigued by the beautiful Coppélia but Hildy suspects things are not quite what they seem. She and her friends follow the seemingly perfect starlet and find themselves in Dr Coppelius’ laboratory. Here, they stumble upon a magical and strange world, uncovering secrets that will change them forever!

This lively and inventive re-visioning of the ballet gets much mileage out of our eternal obsession with youthful perfection. With its nod to the movie glamour of yesteryear, its captivating dance sequences, and the charming music of Léo Delibes and Tom Lane, Coppélia will enchant and enthral audiences of all ages.

The journey of a dancer

The principal role of Franz is taken by English dancer James Loffler who has become something of a Ballet Ireland stalwart since his first appearance with the company nine years ago. “It’s like a big family really,” he tells me as he reflects on an association that has seen him appear in Ballet Ireland productions like Tutus & Beyond, Swan Lake, Carmen, and The Nutcracker. “I joined in 2006 and I’ve worked with them often since then. My relationship with them has grown, I’ve seen the company mature and I’ve matured as well. It’s a really nice working environment, they do great work and we all support each other which is why I love working here.”

James was born in Kircheim, West Germany, but at the age of seven he and his family moved to Guildford. He began his dance training at the Arden Holford School of Dance, became a junior associate of the Royal Ballet School, and at 11 continued his full-time training at the Royal Ballet School. He was a member of Britain’s National Youth Ballet for three years and won the prestigious Barbara Fewster Boys’ Award, under the auspices of the Cecchetti Society.

Since completing his training his work has included such prestigious gigs as appearing with the feted Michael Clark Company in 2008's The Stravinsky Project. “That was a completely different experience to Ballet Ireland,” he tells me. “It was fascinating coming from a company that does classical ballet and then go to Michael Clarke which is very modern, he does a lot of dances with rock music and live music. I did a lot of international touring with them as well which was great.”

James is also an active member of Ballet Ireland’s education programmes, work which he relishes. “When I started dancing I got the opportunity to work with the Royal Ballet Company as a kid and that was one of the things that really inspired me to become a dancer,” he explains.

“I feel it is really important for us to go out and give kids the opportunity to be onstage and experience ballet. Every year we do an annual summer school, which is a week in five or six different towns in Ireland. We’ll work with a group of children for a week and at the end we’ll put on a show and dance alongside them. That’s amazing, I love doing it. We also do a couple of outreach projects where we go into schools and give them some dance lessons and an opportunity to go onstage at the end of them.”

'Coppelius is a kind of Simon Cowell figure' 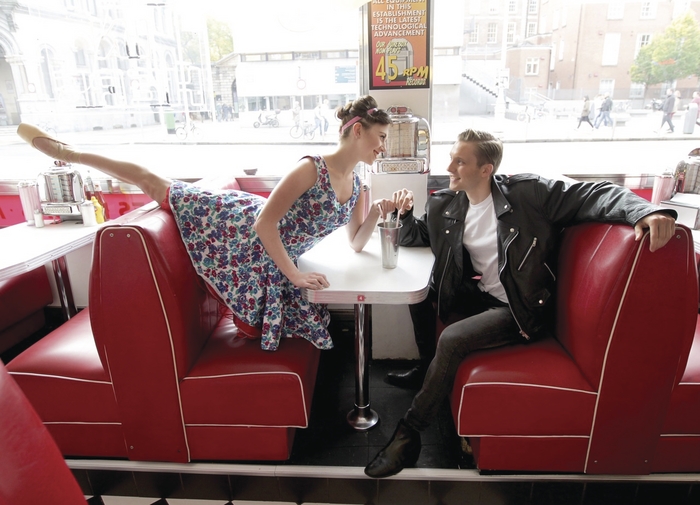 And so to Coppélia; James summarises the show thus; “It’s a completely new reworking of Coppélia, a ballet which originally dates from the 1800s. It moves the story to the 1950s where we’re all these cool guys, it’s almost got a Grease feel to it, we have the slicked hair and leather jackets. In our version the dollmaker, Coppelius, is a kind of Simon Cowell figure, and it’s more like robots or androids he is making. He has this little workshop where he makes all kinds of weird and wonderful creations and he is trying to make the perfect woman. The story is updated and it is fun and the setting is more accessible.”

James describes how the show’s 1950s setting is expressed in the choreography and score. “We watched a lot of videos of 1950’s barn dances and we took a lot of moves from there and made them into our own,” he replies. “A lot of the choreography is modern and based on those kind of cowboy and fifties’ moves but all mixed in with more traditional ballet steps.

"It’s a fusion of ballet and contemporary dance and fifties barn dance. As for the music, we took a lot of the original music then re-recorded some of it. We used a bluegrass band to re-record some of the music in that style, then added a lot things like electronic sounds into the mix. We’ve also added in a lot of sound effects which add to the humour. For instance, there is a scene between me and another guy where we have this slapping session and there are the sound effects on top of it of us slapping each other, it’s very funny.”

I ask James how would he sum up his character Frank? “He’s a 1950s cool guy, with the slicked back hair and lots of swagger,” he replies. “He’s a bit of a Jack-the-lad. He’s a nice guy but maybe not the smartest. He’s engaged to this girl, Hildy, but then his eyes are turned by Coppélia. He’s a fun guy to play in the show.”

Coppélia has been going down a storm so far with both critics and theatre-goers alike. “The audience response has been great,” James declares. “When you are rehearsing it in the studio you don’t always anticipate the audience reaction, how they will see it. We’ve gone through all the stages now and people getting really involved in it, it’s been great and we’ve gotten really positive reviews. The show is really enjoyable and fun and accessible.”