SET IN 1708, Britain is at war and the monarchy has absolute rule. However the country is stuck with a childish, petulant, and depressed Queen who has no real interest in ruling.

Luckily her right hand woman, Sarah Churchill (great great grandmother of Winston ) is happy to guide her and rule by proxy. Into this cosy relationship comes Sarah’s cousin Abigail, a social climber, looking to regain status after her father led her family to ruin. Abigail soon learns a secret of Sarah and uses it to curry favour with the queen. From here a battle for the queen's affection erupts between the cousins.

Queen Anne is played by HRH herself Olivia Colman. Colman just won the Golden Globe for her performance here and I think likely to win an academy award. She has quietly dominated UK TV for years. From Sophie in Peep Show to DS Miller in Broadchurch she has never been less than excellent. Here she gives an incredibly physical, emotional, and brave performance.

Queen Anne’s body was rotten with gout and she suffered a debilitating stoke. She acts like a spoiled brat but as the movie goes on she garners immense sympathy. In all, 17 of her children died, and she replaced them with rabbits bearing the same names. She is clearly deeply unhappy (Are the rabbits in reference to the mad queen in Alice In Wonderland? ).

'The Favourite has to win best screenplay at the upcoming Oscars'

Colman's amazing performance is at least equalled by her co-stars. Rachel Weisz is hilariously cool as Sarah Churchill and - something I don’t always notice - the best dressed character I've seen on screen in years. Indeed The Favourite features incredible work by costume designer Sandy Powell. Sarah delivers her quips so brilliantly dead pan some jokes flew over my head on first viewing. She has been the queen's friend since childhood and I expected there to be a large level of exploitation (there is of course some ) in their relationship but as the film progresses you realise Sarah is genuine in her affection. 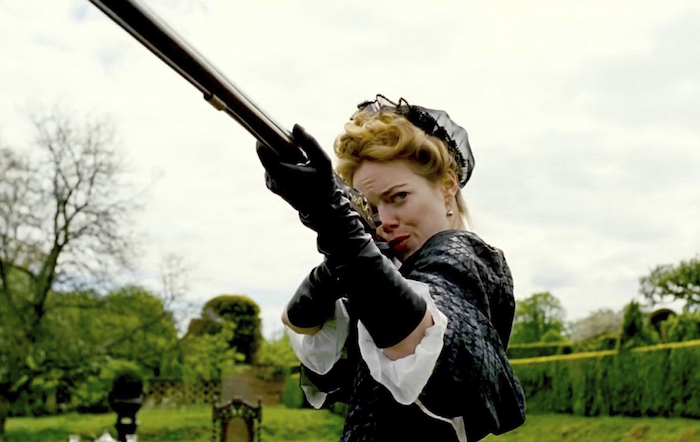 On the other hand Abigail (Emma Stone ) arrives on screen covered in mud. Definitely ready to fight dirty. As her character is revealed, she is not quite the innocent flower you might think. The other two actresses have put out great content before but this is the first time I’ve seen Stone really deliver a great acting performance. One of the final shots with the heel of her shoe on the neck of a rabbit will stay with me for a long time.

The Favourite is Dangerous Liaisons meets Mean Girls. The script is filthy, funny and venomous with a gut punch ending. It has to win best screenplay at the upcoming Oscars. It was hard to know what to expect but the trailer (unusually ) does give you a good feel for the film if you are on the fence. Period dramas are not for everyone, and neither are the films of director Yorgos Lanthimos in general, but in The Favourite he has made his most assessable work to date, one that is an absolute blast.