A GALWAY Christmas without the Renmore Panto is as unthinkable as Santa without his sleigh, and this year’s spectacular offering, Sleeping Beauty, opens on December 29 at the Town Hall and runs to January 13.

This is the 40th year of the Renmore Panto but it remains as sprightly as ever and once again promises a whole hamper’s worth of festive family fun, with a script by Panto Dame Peter Kennedy, and direction by the AIMS award-winning twins, Brian and Seán Power.

Audiences will be sure to relish the Eurovision-themed slant on Sleeping Beauty Kennedy has devised for the production. With Ireland trying to get back to its winning ways in the Eurovision Song Contest, two of Ireland's beloved Eurovision Royalty, King Johnny (Nathan Mannion ) and Queen Linda (Katie Creaven ), marry with the sole intention of creating a genetically perfect Eurovision star of the future. Princess Beauty (Katie Feeney ) is born and the Eurovision hopes of the realm rest on her young shoulders. 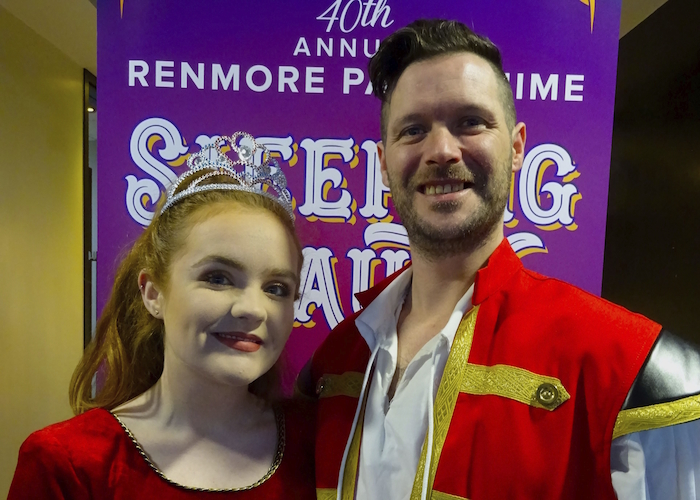 Uncle Louie (Michael Cooney ), Sir Philip (David Booth ), and Prince Nicky (Declan J Gardiner ) judge the competing hopefuls, which include Jill (Siofra Ní Chonluain ) and Egbert (Michael Healy ) as well as Princess Beauty. Naturally there is a villain to boo and hiss and in this case it is the wicked Queen Diana (Marsha Maly ) who believes the Eurovision crown belongs to her and puts a curse on Beauty to prevent her from ever representing Ireland! With Nanny Annie (Peter Kennedy ), and friends Penny (Eilish O'Malley ) and Dopey Dave (Richard Brown ) by Beauty's side, can they help to break the wicked Queen's curse? Will this tale end happily ever after?

From supporting player to lead performer

Katie Feeney, who plays Princess Beauty, is an 18-year old Galway girl who is studying music in NUIG’s new music degree course. “It’s a really good course,” she tells me. “It’s a small class; there are only 26 of us in the course so it feels nice and personal. My preferred instrument is singing but I have my eight grades done in piano as well. Next year we get the option to do a musical theatre module as well so I am looking forward to that.”

Though still in her teens, Katie reveals she is a veteran performer. “I was a member of the Power Performance Academy in Renmore since I was four; I just left them last year. I’ve done loads of musicals with them. I’ve also done musicals with all the societies around Galway and one in Dublin at the Helix as well last summer. This is my fifth panto with Renmore. Four years ago I started off with them as a dancer and did that for three years. Then last year I did just singing in the show because I was doing my Leaving Cert and this year I am doing a lead role for the first time.” 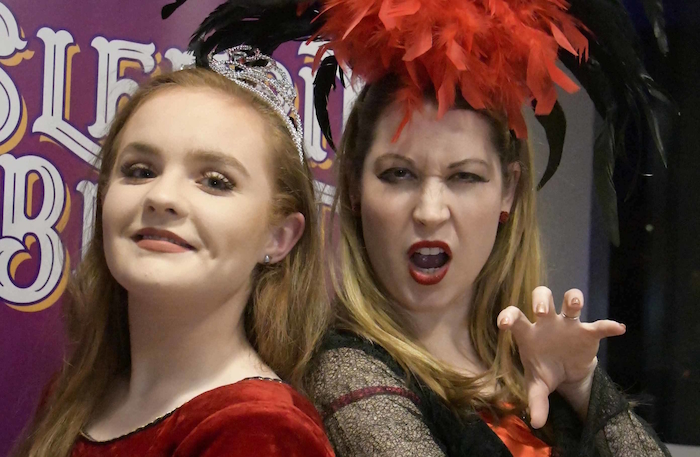 So how is she finding the step up from supporting player to lead performer? “It’s really good fun,” she declares. “I knew all the actors who played leads in the past few years and I had my eye on doing it for a while. I wanted to take on the acting side of things as well because I’ve been just been doing the singing and dancing up to now. It’s a really lovely group of people and we all get on very well.

'Of course there is Peter Kennedy as the Dame he always makes the audience laugh. He is the heart and soul of the panto really'

"The family spirit of Renmore Panto is a big help in stepping up to a lead role. The script itself is so funny and we’re often laughing the whole way through rehearsals. I knew everyone else who got a lead this year so that’s also a support in me taking on the role of Princess Beauty.”

Katie describes the character of Beauty and her part in the story; “My sole purpose is to win the Eurovision because my parents are Queen Linda Martin and King Johnny Logan. However, Beauty is a young cheery princess who just wants to be free. She doesn’t want to be controlled by her parents or anyone else. All they want her to do is to win the Eurovision but she wants to be just young and happy and have fun. My love interest is Prince Nicky and he is a bit arrogant and cocky to start off with so things aren’t great between us initially. However, as in every pantomime it all works out eventually and they fall in love.”

I ask whether the Eurovision theme means there will be lots of songs from the contest featured in the show. “There are a few Eurovision winners,” Katie discloses “I’ll be singing 'Take Me To Your Heaven', which won for Sweden in 1999, and our big finale is ABBA’s 'Waterloo'. A lot of the songs aren’t from the contest however and it is mostly the storyline that is based on the Eurovision.”

Katie outlines a few more highlights from Sleeping Beauty; “There’s ‘the twits’ as always and this year they are Jill and Eggbert who make up the double act Jegbert which is based on Jedward. They sing one of Jedward’s Eurovision songs and also 'Under Pressure' and they’re really good fun. Of course there is Peter Kennedy as the Dame he always makes the audience laugh. He is the heart and soul of the panto really.”

Katie concludes by reflecting on how Renmore Panto compares to others musicals she has done. “What’s nice about the pantomime, compared to other musicals that I’ve done, is that it is a lot more homely when you’re performing, because the audience are such a big part of it," she says, "and they get to interact with the cast as well. The energy of the panto is really special to me and it is a special part of Christmas in Galway as well.”