WHEN DECLAN O’Rourke’s debut album, Since Kyabram, was released in 2004, it confirmed, indeed exceeded, the promise and expectations that had been building up around the Dublin singer-songwriter.

That album contained his great song, ‘Galileo’, which Paul Weller declared was “possibly the greatest song written in the last 30 years”, and was subsequently covered by Josh Groban, Eddie Reader, and Jacqui Dankworth. It marked the start of a career that has seen Declan enjoy critical and public acclaim; release a further six solo albums - three of them in the last three years alone - with 2011’s Mag Pai Zai and last year’s Chronicles of the Great Irish Famine, in particular, earning major plaudits; collaborate with Damien Dempsey and The Dubliners’ John Sheehan; and win the ’Best Original Folk Song' at the inaugural RTÉ Radio 1 Folk Awards

It is strange then, that Since Kyabram has been out of print and unavailable for so long. That anomaly has been rectified however. The album is once again available, in all formats, including, for the first time, on vinyl, and to mark the occasion Declan, and the musicians he originally recorded it with, are on tour, playing Galway’s Town Hall Theatre on December 11.

“Over the years, people have been asking me where they could get it, or saying how much that album meant to them,” Declan tells me as we sit for the interview on a rainy Tuesday morning. “They were saying their copy was worn out, or they loaned it to someone and never got it back, some people’s car swallowed them, all these kinds of things.”

Demand remained high for Since Kyabram, but, as Declan admits, “It was a process of years to get it back”, owing to negotiations, “and some battles” with his former record label. Personal and family reasons, also made the re-release happen. “My wife and I had a baby so I’m spending a lot of time closer to home," he says. "I decided not to make a new album as it’s such an intensive process really, you can be buried for months in it. So I thought this was a good opportunity to get Since Kyabram re-released. I thought it would be a quick process, but it was like making another album, doing liner notes, getting it prepared for vinyl, but I’m glad it’s out again now.”

Roots going back to Galway

Since Kyabram was recorded in a cottage in Craughwell owned by traditional musician Sharon Shannon. Coming to Galway and recording his debut album here, had a special resonance for the Dubliner. “Recording it was one of my first times, as a grown man, coming to Galway,” says Declan. “I really felt the connection, felt the pull. I was always aware of my heritage, through my granddad, Michael Killeen, who was from Kinvara.

"Galway felt like a really good place to come and make the record. I wasn’t that familiar with the Craughwell area. It seems like out in the middle of nowhere. We were shut away from everything, we lived in the studio. Finished work, slept, got up and did it again. There was nothing else to do but make music. There was a song on the record, ‘We Didn’t Mean To Go To Sea’ which was, in a way, a dream of wanting to spend time in Galway. That helped draw me here. After the record was done I had an idea of spending a few months here, and finding out more about my granddad, and I’ve been living here 12 years now.” 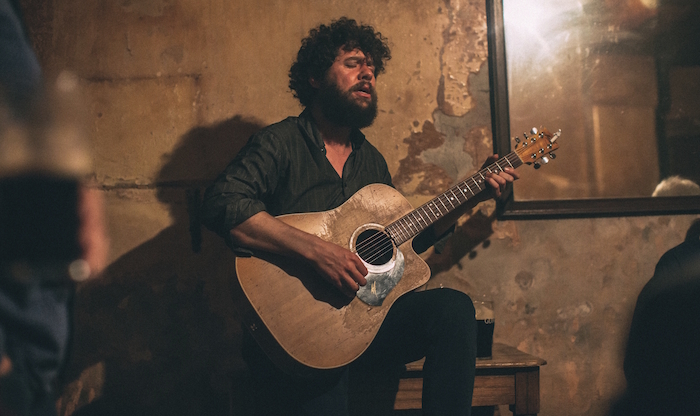 That Sharon Shannon’s cottage was located close to the grave of the poet Antoine Ó Raifteiri (1779 - 1835 ), famous for the poem which begins: “Mise Raifteirí, an file, lán dóchais is grá le súile gan solas”, was another curious case of synchronicity.

“I had an Irish teacher - who I think was from Galway - in secondary school in Ballyfermot,” Declan recalls. “He’d be walking around the classroom as everybody would be doing something quietly at their desk. He’d sneak up behind you. I’d always be drawing Les Paul guitars, and he’d look over my shoulder and shake his head and say, ‘You’ll end up like Raifteiri! Playing music to empty pockets!’ and then walk on. He’d say it in an almost playful way. There wasn’t malice in it. Years later we arrive at the studio, the resting place of Raifteiri was close by, so this was either my teacher was proven right, or this was my chance to prove him wrong!”

'I have been writing a lot of material that has been heavily focused on me and a guitar. I've always wanted to make an album that’s very stripped down, just me and my voice. A lot my favourite albums are like that or very close to it'

Indeed Declan had come prepared and ready, with a strong work ethic already in place. “I was playing a lot of gigs two or three years before that, playing anywhere that would have me,” he says. “I was in Paddy Casey’s band and opening for him, and was in the studio for his Living album - so I had good discipline. I did a lot of preparation for that record, so when we walked in the door I knew what I wanted to happen. Still, it just went ‘Kablamo!’ I think the whole process took about a month, but the bulk was done in a few days. I think we reheard for five days and recorded in five or ten. It was fast - but they were long days. We were recording for between 12 to 16 hours a days, and the album’s only an hour long! It was chasing the beast until you got the one you wanted.”

The enduring appeal of 'Galileo'

Of course, ‘Galileo’ is the album’s key track. So what is Declan’s relationship with the song today? “I never get tired singing it,” he declares. “Some people get known for a song, and it can be a millstone, or something you don’t like playing, so I was blessed it was something that, as I’ve matured, has fit me more, and I think it suits my voice as I get older. It’s lasted for people and it kind of has its own life. It was translated into Icelandic last month and will be recorded by an artist there who is very popular, and Josh Groban’s cover came seven or eight years after I recorded it, so when you think it’s dying off, it starts to ramp up again.”

Who else would he like to see covering the song? “I’d love to hear it sung by Tony Bennett. I’ve sent out to him, but I don’t think he’s recording anymore. I’ve sent it to Madeleine Peyroux, I’d love to hear her singing it, she’d do such a great job. Brendan Graham and Mike Scott have been pushing me to send it to Andrea Bocelli. I’m allowed to dream. That’s how things happen, you have to dream them first.”

Declan is never one to rest on past glories, be they Since Kyabram, or last year’s acclaimed Chronicles of the Great Irish Famine. He has numerous plans regarding both original material, a possible project about Raifteiri, and older material that he feels deserves an airing.

“I have lots of stuff. Piles of songs,” he says. “I have been writing a lot of material that has been heavily focused on me and a guitar. That’s been the basis of what I’ve done all my life as a musician, and always wanted to make an album that’s very stripped down, that’s just me and my voice, a lot my favourite albums are like that or very close to it. The material is leading me that way. That is definitely coming up soon.

“I’d love to explore more about Raifteiri and do some writing on him at some stage. Some of the stuff we did yesterday was looking back at songs that didn’t make it onto Since Kyabram. I’d love to make an album of those songs. I also have a couple of live albums sitting waiting. One of them is what was once going to be my first album, maybe a year or two before Since Kyabram. It’s a pile of different songs. It’s a different me, me in development, but it’s a fully formed sound. I’ll release that at somer stage.” Then he adds with a laugh: “Star Wars is allowed have prequels. Why can’t I?