AHEAD OF Bloomsday, County Galway publishing house Doire Press will hold the launch of a new poetry collection, Furey, by James Joyce. The Joyce in question is not the author of Ulysses but Galway’s own James Martyn Joyce, and the collection revolves around the vivid, memorable, persona of Furey.

Furey is a character who, in the words of poet Elaine Feeney, animates poems that "are sharply satirical, often funny, and sometimes heartbreaking for the anti-hero’s remarkable courage to just continue. I feel I’ve known Furey all my life, I’ve met him on the streets of Galway, I’ve watched him fire up a storm all of his own making then ducking for cover. The long road has made him wary, and without preaching, he has lots of lessons to impart”.

Last weekend, James sat with me to talk about the book and began by describing its gestation. “I had about 200 pieces written since my last collection, Shedding Skin, came out in 2010,” he begins. “They were all individual poems but it suddenly dawned on me that a lot of them were in the same voice, and I was thinking what would a good name be for the voice; he is a quietly angry character and I hit on the name 'Furey' which gets across the feelings that are in a lot of the poems; there is a delicate nastiness in there. I then rewrote all the poems as Furey poems and ended up with 63 I was happy with, and that felt true to the character. Then I gave them to John Walsh at Doire Press and he came back and said he liked them.”

'That’s what I liked about Seamus Heaney; he was the person first and the poet afterward'

The poems follow Furey from childhood to old age and dramatise his personal battles, whether a fight with posh boys over a sled, or run-ins with priests and other authority figures. ‘Revelling In It’ evokes a sadistic teacher: "When I see you on the street/ Brother,/I am back, faceless in your class/While you patrol the aisle/claiming Mary as your bride/Jesus as your son/bending us to a Rule/which was never His/Revelling in it."

“It’s something I feel strongly about,” James declares. “I started school when I was five and was taught then by nuns. I remember the sense of fear we constantly felt in the class – we’d be hammered. Then when I went to secondary school, there was an element of fear there too, and one or two of the poems come out of that time. We were as tall then as we are now and yet we were terrified. I wasn’t a bad student – I loved English and Latin and was good at Irish - but I still often got thumped.

"The teachers had the attitude of beating knowledge into you. I went on to be a teacher myself and resolved early on that that was one thing I would never do. I finished up as principal of a school run by the Catholic Church but I ran it as openly as I could and it was a difficult balancing act at times. I’m 10 years retired now and have to say, looking at what has come out over the last 20 years as regards clerical scandals, I have even less respect for the Church now than back then.” 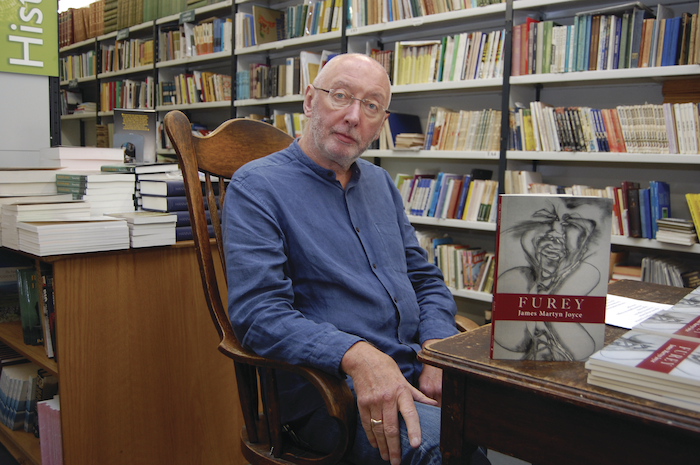 In several poems, such as ‘Furey Meets a Famous Poet at a Bus Stop’, our hero encounters a literary celebrity and punctures his importance with some sharp remark. “That’s when he gets drunk!” James laughs. “I tried to keep that poem as generic as possible; I didn’t want to point the finger at any particular famous poet. There is a certain type of famous poet who is shoehorned into an image of themselves and is then expected to keep to that. That must be really difficult. That’s what I liked about Seamus Heaney; he was the person first and the poet afterward, he was a genuinely nice man. Another poet I admire a lot is Tom French. I saw him once being introduced as ‘Tom French the poet’ and he replied ‘That might be what I do but it’s not who I am’. I think you have to look out for that.”

‘Bullitt’ evokes the Steve McQueen movie and observes an uncanny similarity between the projectionist and the movie’s villain, delivering a great pay-off in its final lines. “That was a film I remember going to see as a teenager and I went back to see it again and again,” James recalls. “There was a projectionist in the Savoy Cinema on Eglinton Street who was a solid block of a man with horn-rimmed glasses. Every time I went to see the film he’d come in for the chase and fold his arms and stand at the back. When the villain’s car goes off the road and into the oil tanks, he’d shake his head and leave. I had that idea for the poem in my head for years. I watched the film again recently and found it as good as ever, and a darker one than I realised as a teenager. I was just into the action and car chases.”

Furey is full of verve and vitality and its poems well rewards repeated readings. It is officially launched on Friday June 8 at Kenny’s Bookshop and retails for €12. James concludes our chat with praise for his publisher, Doire Press. “It’s been a really positive experience for me working with John Walsh and Lisa Frank of Doire putting this together. I can’t praise them enough. Here I am two weeks from the launch and I feel totally relaxed, the books are already printed and ready to go and I am thrilled with that.”