ONE SIDE-EFFECT of Galway not having a municipal gallery is that exhibitions pop up in various venues and two current shows worth seeing are in the NUI Galway staffroom, which is hosting Áine Phillips’ Performaphilia, and the Black Gate Cultural Centre, where the group show, Conflict, is on display.

Performaphilia offers a fresh perspective on the work of leading performance artist Áine Phillips. The exhibition features nine watercolour paintings inspired by themes and images arising from selected live performances. Speaking at the exhibition opening, Phillips revealed that “sometimes the paintings were created as ‘cartoons’ [as in the art historical definition of a preliminary drawing] that helped me devise and plan out a performance work. Sometimes I created them afterwards in response to the live work and the ideas it generated... It is an inter-disciplinary approach using one medium to describe and elaborate another, presenting the idea in a new and unexpected way. The style of these paintings is also ‘cartoon’ like in the contemporary sense - humorous, absurd or both.” 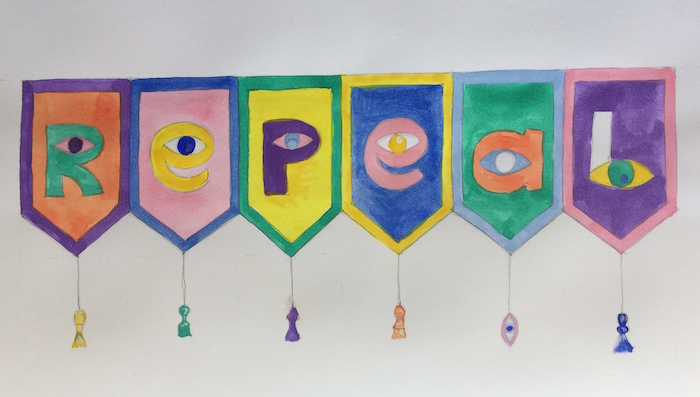 The ‘humorous, absurd or both’ confluence is most apparent in ‘Buttered Up’ which depicts a female figure vanishing headfirst into a sofa, with only her lower half still visible. The original performance piece which it alludes to – Buttered – was in itself humorous and a signal reproof to notions that art can be overly po-faced.

Other works on show include ‘Mot Juste’, depicting a woman in a boat costume, and ‘Aspiration’, showing a figure covered in coat-hangers. The performances from which these derive addressed issues of domestic violence and abortion. While the paintings may lose some of the thematic weight and complexity of the performances, they still convey a sense of ideas-in-action and are engaging on their own terms. ‘Repeal Banners’, the most recent piece, depicts designs Phillips devised for banners used for a ‘Repeal the 8th’ event in April. Performaphilia runs throughout the summer and Phillips will also be one of four artists performing at Galway Arts Centre on July 5.

Conflict, at the Black Gate, is an exhibition of paint and print by four artists; Harriet Leander, Fin Bar, Mark Walsh, and Austin Ivers. The 20 works on show are stylistically disparate and yet curator Margaret Nolan has co-ordinated them into a complementary set of responses to the central theme. 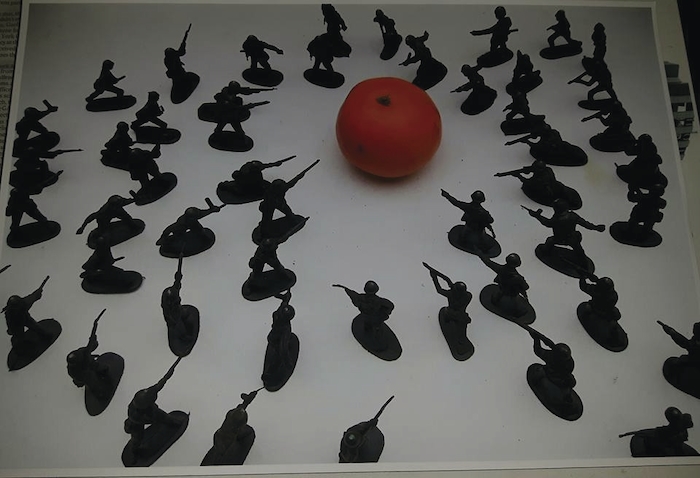 In its variety, depth and force, Harriet Leander’s work is especially impressive. Her photo and ink compositions ‘Soldiers, I, II & III’ project toy soldiers into scenes of turmoil and threat, and finds dramatic tension between their ‘toyness’ and what soldiers do in reality. Leander’s mixed media pieces, with titles like ‘War’, ‘Chemical Attack’ and ‘Refugees’, directly engage with the conflicts scarring our modern world. The stylised mask/face which recurs in several of these has echoes of Basquiat while Picasso’s Guernica is also present as an influence.

Austin Ivers’s prints are much sparer compositions than Harriet’s and, in their evocation of the 1950s Cold War, their sparseness suggests a world where ‘conflict’ was seen in simpler binary terms. He distils disparate objects into cool iconic signifiers; the logo of Mercedes Benz, the Soviet Red Star, a US military jet. Though deliberately understated, the conflict implied in his images is still palpable.

Fin Bar’s spray can on canvas works revel in the conflict and collision of colour and form; they are like seething eruptions of lava, full of energy and incident, contrasting textures, tones and shades. Completing the line-up is Mark Walsh with his brooding red and blue saturated prints of bombers wreaking their grim havoc, an image that remains all too real for cities in Syria, Yemen and elsewhere. Conflict continues for the next month.