FOR THE past three years, under the astute curatorship of Margaret Nolan, the Town Hall Theatre bar has been one of the more unlikely but liveliest city venues for art exhibitions with a steady succession of high quality shows.

That trend continues in its 2018 curtain-raiser exhibition from film-maker and photographer Ivan McMahon which comprises striking black and white landscapes of Inis Oírr.

The Aran Islands have been a source of inspiration to artists for generations. One of the first people to photograph them was John Millington Synge whose images, made around the turn of the 20th century, centred on the islanders and their daily lives. More recently, in 2007, renowned Irish painter Sean Scully produced his exhibition and book Walls of Aran, which focused on the iconic and timeless dry stone walls that criss-cross the islands. 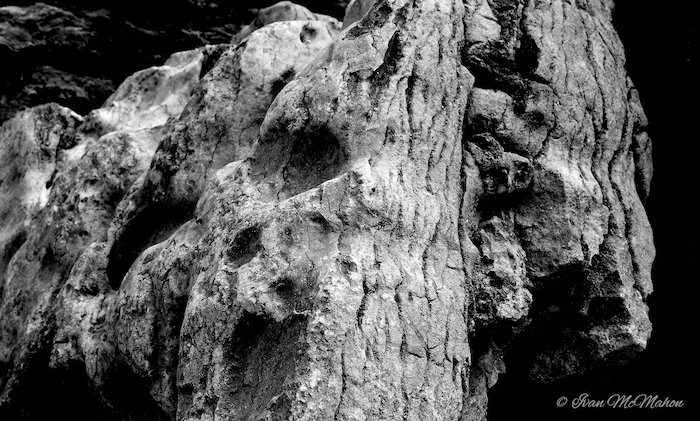 McMahon’s photographs are closer to the work of Scully than Synge but have their own potent and distinctive visual stamp. They might more accurately be described as rockscapes rather than landscapes as McMahon explores the tones and textures of rock formations that have been shaped and sculpted for millennia by sea, weather, and time.

Unlike Scully, McMahon is more interested in natural than man-made structures though ‘Na Sídh’ presents a dramatic interplay between the two as hulking, fissured slabs of cliff are sandwiched between low rocky walls at the top and bottom of the image. Elsewhere, natural forms seem to echo man made ones as in ‘Dagda’ which suggests ancient castellated battlements, or perhaps the prow of a mighty stone ship projecting outward toward the sea.

McMahon has titled all his images after deities and figures from Irish mythology while the catalogue also carried two resonant quotations about the work; from The Iliad there is ‘Gods are hard for mortals to recognise’ and from renowned French photographer Robert Doisneau there is ‘To suggest is to create; to describe is to destroy'.

In Inis Oírr, a reflection, McMahon has a produced 12 richly suggestive and poetic views of the island which delight the eye and linger in the memory. The exhibition continues at the Town Hall for the next three weeks.