Last Friday night was the occasion for COPE Galway’s annual Sleep Out where 30 of the city’s business and community leaders spent 12 hours sleeping on the streets in a venture that has raised €110,000 to date for homelessness services.

Earlier that afternoon, at the Fairgreen Hostel, I met COPE Galway CEO Jacquie Horan who talked with me about the homeless crisis and COPE’s other vital services for victims of domestic abuse, and older people. A native of Roscrea and a social scientist of wide experience, Horan has been in charge of COPE Galway since 1997. We began by talking about the city’s homeless crisis which has seen numbers of both ‘rough sleepers’ and homeless families rising steadily and substantially over each of the past four years.

“I find it hard to believe we find ourselves in this situation,” Horan declares. “Nobody envisaged that there would be more people sleeping rough now than there were in the 1980s. There are more people sleeping on the streets than I have seen in my entire time with COPE Galway and families are falling into homelessness daily which was a situation that never existed previously.”

With COPE having to put ever more resources into homelessness can they keep their other services fully operational? “We absolutely have to keep our other services going because they are equally as important,” Horan replies. “We feed 160 older people every day and you just can’t compromise on that. With regard to domestic violence, that issue has also worsened since the recession. Our funding levels were cut significantly during the recession and while they have now stabilised they haven’t started going upwards so we depend on the generosity of the public and they have been very generous, their support has increased year on year. I think it’s because we are a purely local organisation, the people of Galway have adopted us as their charity of choice so we’re very lucky in that regard.”

Horan outlines the issue of family homelessness; “Because of the shortage of housing people are falling into homelessness who never imagined it could happen to them. We’re getting calls on a daily basis from families who were holding down stable accommodation in the private rental sector for years; paying their rent, working and living a normal life. Then, for whatever reason, either the landlord decides to sell the property or the banks have repossessed it, they have to move out.

“That’s when the problem hits because rents have increased dramatically and many people cannot pay those higher levels. There are queues of people now for any house for rent in Galway. There was a time you’d go on Daft.ie and there’d be up to 200 three/four bedroom properties around Galway and now if there is 10 that’s a good day. That’s the situation facing ordinary families.”

“We tell families who’ve been given notice to quit to contact us and local authorities ASAP and not leave it until the last minute,” Horan continues. “Sometimes either ourselves or Threshold can negotiate agreements letting families stay in their houses. If they do have to leave and have nowhere to go we try to find them some form of emergency accommodation. We also have 13 or 14 properties ourselves where we can place families but they are usually full.”

I ask Jacquie can she see any hope of the homeless situation improving; “I believe Simon Coveney’s plan, Rebuilding Ireland, is a good one but we still aren’t seeing houses being built and, until that happens, things will get worse,” she declares. “Locally, I would like to see more resources being put into the Void Housing Strategy. It just seems wrong that when so many people need houses there are houses not being occupied.

“Local authorities have been given some additional resources to identify properties that are void in their areas and to bring them back into occupation and I’d like to see more being made of that. I believe Galway is small enough and the goodwill exists that instead of having 45 families today living in a hotel room or B&B we could house them. The problem here is not as big as in Dublin, it’s manageable if we put our minds to it.

“Every opportunity we get in COPE Galway we make that point and say to the community ‘do you know of a void property that could be brought back into use? Could you put a rental property in our direction before putting it on the market?’ We’ve also moved into purchasing properties so if someone is selling they could contact us first and maybe we could purchase it.”

Jacquie next switches her attention to domestic violence, another major social problem which COPE deals with on a daily basis. “Domestic violence still doesn’t get talked about openly enough,” she observes. “The level and intensity of it has increased over the last 10 years. A Europe-wide study from 2015 found that one in five women over age of 15 had experienced domestic abuse. We run our refuge in the city and one of our big projects is to deliver a new domestic violence refuge.

“In 2013, the Sisters of Mercy donated the convent associated with the Magdalene laundry on Forster St to us and we will turn it into a state of the art domestic violence refuge and all-encompassing service. The construction phase should start in spring of next year. It will deliver increased capacity, have a fabulous childcare facility, and will have a facility for enhanced outreach work.”

COPE does terrific and varied outreach work in this area, as Jacquie reveals; “Only a small proportion of women who experience domestic violence will need a refuge, but everyone experiencing it needs guidance and advice around their own safety and accessing the supports available to them. We’ll have a team to meet women in the city and county and help them validate the experience they have gone through. Many women first experience domestic violence when they become pregnant, and now there is a mandatory question on every assessment that nurses do when somebody presents at maternity care and that is a great step forward and a good way of opening up a conversation with someone who may be experiencing violence.”

“We try to inform and educate professionals who are coming in touch with a wide range of women and we have people who give staff training sessions to help them identify signs of abuse,” she continues. “We’ve produced a video for GPs to help them respond to women and this week we’re launching a support booklet produced by women who came through our services all about parenting in the context of domestic violence. It’s a wonderful booklet and highlights that there are parenting supports available. We have also been going out to schools and delivering programmes around healthy relationships to teenagers, and that’s really important and women who’ve been through our service have helped devise the content. So we are trying to address the whole societal issue around domestic violence and to inform and educate. 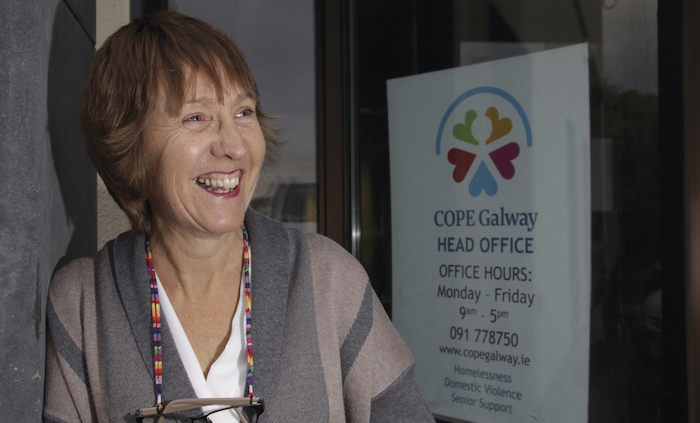 “Meals on Wheels was one of our first services to start in the city. We have developed a really good quality Meals on Wheels service in our Ballybane facility; we are the only service in the country that has a ‘Q’ quality mark for our product. Over the last few years we’ve been noticing that about a third of our meals are modified meals – modified in texture because it needs to be chopped up or blended, or modified to suit specific dietary needs.

“When we began our research we learned that some 25 per cent of baby food in supermarket is being bought for use by older people. We recently received a grant that will enable us to develop a business plan to explore the possibility of developing commercially available modified meals for old people and getting them into supermarkets or purchased online. We try to meet the needs of the older person who wants to stay living at home as long as possible.

“Coming up to Christmas is the busiest time of the year for us across all our services and we are presently getting in donations from individuals, companies, and the public. We’ll be delivering 350 food hampers to homeless families and we’ll be giving gifts out to every child that has come in touch with our service so that’s over 1,000 gifts –and that’s our Galway community responding to us. I can’t overstate the incredible generosity of the public and we wouldn’t be able to carry on without them.”