REVERED US comic Louis CK’s Horace and Pete was a one-series webcast black comedy described as "Cheers on Prozac" and which won a Peabody Award. Written and directed by Louis CK, who also starred as bar-owner Horace, it featured such stellar supporting players as Steve Buscemi, Edie Falco, Alan Alda, and Jessica Lange.

The high calibre of the show’s scripts drew the attention of Momentum Acting Studio directors Liza Michael and Robbie Byrne [pictured below], who managed to acquired the rights from America’s foremost comedian to stage a number of scenes from Horace and Pete. The Dublin company will bring its staging of three excerpts from the series to the Town Hall Theatre studio as part of the Vodafone Comedy Carnival Galway.

There are striking moments in every episode and Momentum has picked some of the finest ones. Most centre around Horace’s interaction with the women in his life. And they are riveting. The series has been described as ‘full of extended monologues, indignant soliloquies, meandering apologies, harrowing confessions, and lacerating put-downs" and somehow, it is still enormously funny.

The production is helmed by Momentum directors Liza Michael and Robbie Byrne who have been a team ever since first meeting 17 years ago when Michael came to Dublin from her native France to perform in a show. They have worked together in both London and Paris before returning to Dublin three and a half years ago to set up Momentum, which specialises in teaching the Meisner acting technique.

“I’m probably responsible for our return to Dublin,” Byrne admits over an afternoon phone interview. “It was partly because I am Irish and the other reason was that when I started out as an actor here years ago I felt the training I was getting wasn’t enough. I wanted more and that’s what made me go to Paris and London and work there.

"Then the time came when I felt there was an opportunity to bring back the skills I had acquired abroad and weren’t available to me when I was starting out. We have a studio and a stage here in Lombard Street which is much cheaper than it would be in London and it’s much easier to set up something like this in Dublin. Also, the scene here is smaller and less competitive and you can become known and find people just through word of mouth.”

I ask how Momentum managed to secure the performing rights for the Horace and Pete material? “The main thing was absolute tenacity and persistence and being very patient about the whole process,” Byrne replies. “We had to be very clear and upfront about what we were doing and where we were doing it, what parts of the scripts we were using so there was a whole process to go through to ensure they were happy with it.” 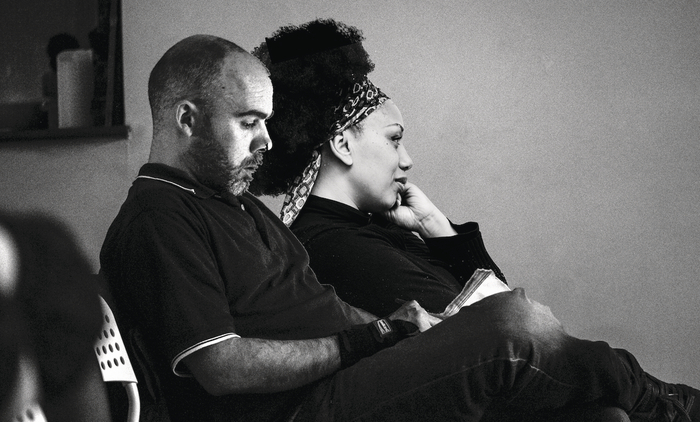 “That’s where there being two of us really helped,” Liza interjects. “Neither of us would probably have managed on our own, there were a lot of phone calls and emails. A lot if it was just us not taking ‘no’ for an answer!”

“I also sent over some nice bottles of Irish whiskey and hopefully they helped,” Robbie adds with a chuckle. “Though after I bought them it turned out I had to FedEx them and that was probably even more expensive than the whiskey.”

Byrne outlines the excerpts from the series they use in One Night Stand. “We took three encounters Horace had with women. ‘The Morning After’ is him having breakfast with a woman after they’ve spent the night together. Another one is called ‘The Booty Call’ where he asks this woman around to have sex, then the third one is where he has a fantasy about this older woman. They are all from different episodes of the series and we boil it down to these meetings with different women and how he deals with relationships and his love life.”

Do Momentum’s actors have scope to bring their own take to these characters that audiences may strongly associate with their screen personae? “Louis and the other actors in the series are unique and brilliant but our actors are also unique and they have their own take on the characters,” Byrne asserts. “The writing is so good that it can support many different versions of the scenarios. We certainly feel our actors have brought something to it that is quite different to what you have seen from watching the series on screen, but at the same time also fits the circumstance of the text and the writing is so good allows for that. One of the reviews I heard said that the writing is very theatrical and I agree with that.”

Finally, I enquire what kind of insights into women and love the scenarios offer? Liza replies: “For Horace, women are like a nice cake that he can relish but is afraid of them too; there is an attraction yet fear of falling in love which can create problems – it doesn’t always go like a fairytale. Horace is always hesitating, he nurtures his own miseries about being alone yet he also takes comfort in it and can’t take the risk of falling for someone and having to share his problems with them; women make his life more alive including trouble and pleasure.”

One Night Stand runs from Thursday October 26 to Saturday 28 at the Town Hall Studio. Tickets are €15. See www.vodafonecomedycarnival.com