Promiscuous Olive (Kate Stanley Brennan ), junkie prostitute Tilly (Amy McElhatton ), and embittered wife Alison (Siobhán Cullen ) deliver inter-linked monologues that conjure a grim urban and moral wasteland where violence and cruelty are endemic. There are brutal assaults, rapes and murders - including the grisly dispatching of a horse - while a sinister pack of dogs periodically appear as further harbingers of hellishness.

O’Rowe’s script, written in muscular rhyme, is full of propulsive verve and flair and Comyn gets riveting performances from all three of her actors. Yet, the unrelenting grimness of the play’s world is also somewhat wearing. All three women are afforded moments of saving grace which pertain in each case to their maternal instincts; but that is gender stereotyping surely? Could O’Rowe not have conceived some different positive impulse or idea to at least one these characters?

Roddy Doyle’s Two Pints, from The Abbey, toured around several city bars; I caught it in Tigh Neachtain. Based on Doyle’s popular dialogue series which originated on Facebook, it features two middle-aged Dubliners (delightfully played by Liam Carney and Lorcan Cranitch ) discussing life, the universe, and everything over a succession of scoops. Much of it is hugely funny, such as their fan worship of, and imagined scenarios for, Nigella Lawson and acerbic pronouncements on world affairs.

Hand in hand with the laughter the show is also very moving. Carney’s character’s dad is dying in hospital and as the play progresses so does his illness, prompting touching reflections on the loss of a parent and growing older oneself. The inevitability of death also prompts some hilarious speculation on the nature of the afterlife as the two bar-stool philosophers conjure a heaven where they can get together with favourite footballers. There are also pointed (but not laboured ) observations on class, as these two working class buddies ruefully muse on how the likes of them are excluded from society’s elite jobs. Director Caitríona McLaughlin delivers a non-showy, warm, funny, and touching production that lingers in the memory.

Another gem was Meet Fred by Hijinx Theatre and Blind Summit which was presented by Blue Teapot at its Munster Avenue venue. The eponymous Fred is a two-foot tall blank-faced cloth puppet - operated by three puppeteers - who we see coming to consciousness at the start of the show and then trying to steer his way through a succession of ill-starred encounters, such as a date with a real woman and a meeting with a hostile case worker in the Job Centre. Proceedings are chivvied along by actual director Ben Pettit-Wade in the role of ‘director’ as the hapless Fred tries to assert himself in a hostile world. Inventive puppetry, clever set pieces, and a story that blends imagination, humour, pathos made this a truly beguiling show. 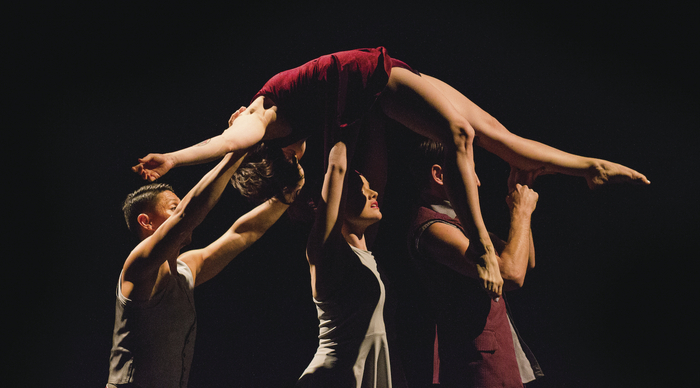 Australia’s Casus Circus made their second GIAF visit with Driftwood at NUIG’s Bailey Allen Hall. Throughout the show’s hour-long duration, the quartet of performers repeatedly brought gasps and 'Oohs' of admiration from the audience who delighted in the thrilling and intricate routines. The cast came together in different permutations; twos, threes, fours and as individuals in wonderful displays of physical imagination skill, strength and agility – with occasional moments of playfulness as well. Hugely enjoyable.

GIAF 2017 gave us a consistently high standard of production. To my chagrin I missed The Second Violinist due to ‘unforeseen circumstances’ but of the productions I did see, my definite highlight was Kneehigh Theatre Company’s Tristan & Iseult which was an unforgettable joy. Hats off to director Emma Rice and Kneehigh and to all the other artists who helped make the last couple of weeks so enjoyable.