IT MIGHT not sound like it, but Dead Dog In A Suitcase is actually the title of a love song. It does though, sound like a play about a contract killer. It is both, in fact, as Galway will see this summer.

Dead Dog In A Suitcase (and Other Love Songs ), written by Carl Grose, with music by Charles Hazlewood, and directed by Mike Shepherd, will be staged by Kneehigh, with Liverpool Everyman and Playhouse, during the Galway International Arts Festival.

Mayor Goodman has been assassinated. And so has his dog. Contract killer Macheath has just married Pretty Polly Peachum and Mr and Mrs Peachum aren't happy. Not one bit. A political comedy based on John Gay’s The Beggar's Opera, it features puppetry, physical theatre and live music (trip hop, folk, ska, grime, and dubstep ), and examines the capacity for corruption within individuals and institutions. Kneehigh will be familair to Galway audiences from its staging of Tristan & Yseult at GIAF 2017. 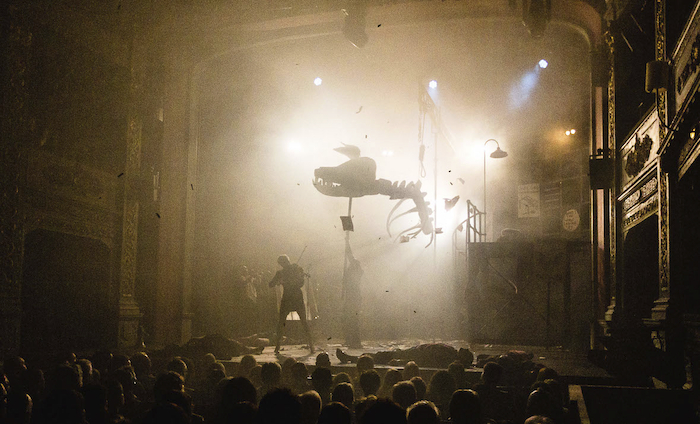 The show takes place in the Bailey Allen Hall, NUI Galway on July 16, 17, and (7pm ), July 18 and 19 (6pm ), and July 18 and 20 (2pm ). "Dead Dog In A Suitcase (and Other Love Songs ) is already tipped to be one of our festival highlights," said GIAF artistic director Paul Fahy. "I’m looking forward to audiences experiencing the magic that is Kneehigh this July.”