THIS YEAR'S Galway Fringe Festival visual arts programme features a special exhibition of 'rural pop art' by the celebrated Breton collective Hangar’t. The group hails from the village of Nizon, near Pont-Aven southern Brittany, an area which greatly inspired the work of Paul Gauguin.

The Hangar’t story began in 1992, when Yves Quentel, a journalist passionate about art, gathered together residents of Nizon with the idea of exploring, through collective memory, the former way of life of the village which was fast being forgotten. Meetings were held every Sunday in the Le Noc café-butcher shop in the village. People brought with them photographs found in old shoe boxes or in family albums and these became the basis of pop art paintings.

The Hangar’t artists are male and female farmers, architects, butchers, crepe makers, carpenters, retirees, and school teachers. The only professional painter in the group is a painter of cars! There were only a handful of people at the first meeting but now there are 75 who have done at least one painting each in the Hangar’t studio.

They gather to reaffirm their role and to preserve the memories of the past. Each artist relates his/her own story through their art, which is often far from that of the “official” history of the town. The Hangar’t studio has also used their paintings to cement and maintain an active social life that helps preserve inter-generational links. Interestingly, at Hangar’t, no one signs their work, because each piece is a collaboration. 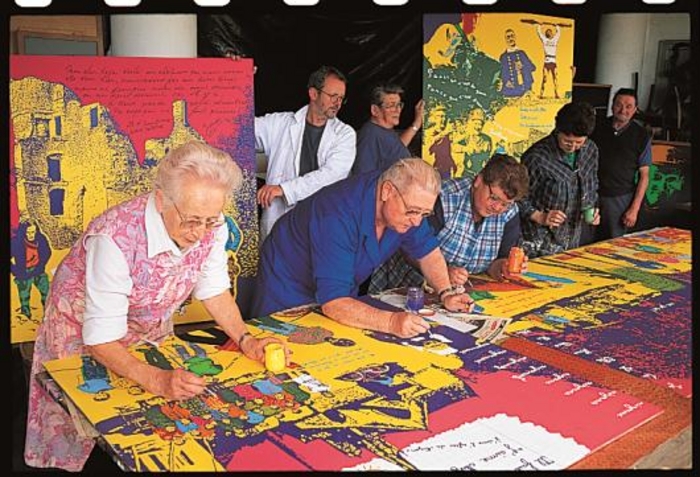 The Hangar’t working method is simple: photographs are photocopied and reworked in order to separate areas of the same density of dark and light. They are then transformed into slides and projected onto a surface. Then flat areas of colour are highlighted in a method unique to Hangar’t. After that, it is up to each artist to follow his or her own imagination.

With this philosophy, they made a series of work on the horses of Jos Mestric, who worked the last nine horses in the area harnessed for farm work. The horses had been consigned to the butcher but all were purchased by locals, who provided them with a peaceful retirement. Another series of Hangar’t works features the story of rag-pickers: 17 portraits of peasants who, in 1956, transformed themselves into actors to present the story of of the rag-pickers of Abbé Pierre’s Emmaus, an organization similar to The Salvation Army.

The Hangar’t collection today contains more than 300 paintings. Together, these works from different periods tell the real history of the village. A Mamm-gozh (grandmother in Breton ) becomes a universal symbol, with limitless evolutions through different color combinations. Alongside her are many other portraits - women in their coiffes (a style of headgear ) and men in traditional costumes rendered in the colours of pop art.

Animals and scenes of everyday country life are subjects of great importance to Hangar’t painters and thus are the focus of many of their works. But in their paintings, the cows might be blue, the wheat red, and the skies are sometimes pink or yellow. As for landscapes, they also have a pride of place, as the painters of Nizon focus on the environment in which they grew up. Striking in their uninhibited colors is a series made from old postcards of the standing stones in the village. 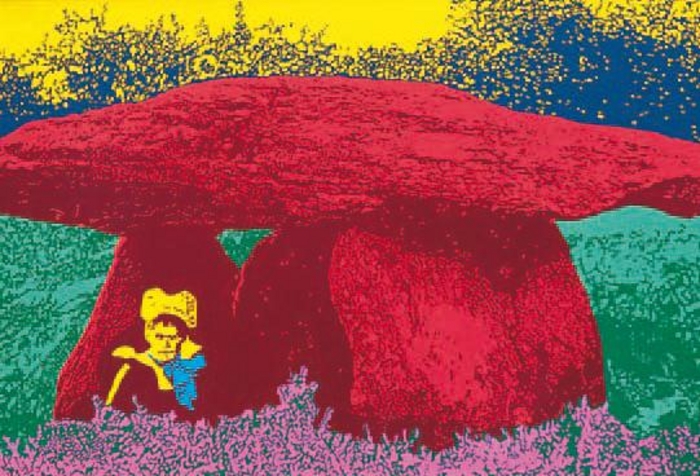 The Hangar’t collective’s renown has extended far beyond their native Brittany and exhibitions of their work have been mounted in both Paris and New York. Now Galway will get to see and enjoy these striking artworks in a show that’s bound to make a splash on the city’s busy festive summer season.

“There will be over 30 pieces on show in the exhibition,” says Fringe Festival director Claire Keegan. “Also, 40 members of the Hangar’t collective are travelling over to Galway during the second week of the fringe. It’s really exciting to have this show coming over and the work is beautiful. We’ve also been given a fantastic venue for the Galway City Gallery. It’s the PIA boutique beside the Mechanics Institute, on Middle Street. The Hangar’t collective will have that space totally to themselves.”

The Hangar’t collective will exhibit at the Galway City Gallery as part of the Galway Fringe Festival from Monday July 11 to Monday 25. See www.galwayfringe.ie