THE LAUNCH for this year’s Galway Theatre Festival took place on Monday at a lively gathering in BiteClub in Upper Abbeygate Street. A large and enthusiastic crowd gathered to mark the occasion, and between sips of prosecco and tasty canapés, the assembled guests pored over their programmes and amiably chatted about the many attractions on offer.

The festival runs from April 29 to May 7 across a range of city-wide venues and presents an array of exciting theatre work, much of it new. Among the attractions is Brokentalkers’ award-winning The Blue Boy, which deals with the experience of children in Catholic residential insititutions; Little John Nee and Laura Sheeran premiere their new collaboration, Ribbons; Sarah Hoover’s ‘durational performance’; Expectations is inspired by Charles Dickens’s Miss Havisham; and WillFredd, one of Ireland’s leading young companies, presents Care, which gives an insight into the world of hospice staff.

In her introduction to the programme, theatre fest chair Máiréad Ní Chróinín writes: “This year’s theme, (r )Evolution, tips its cap to the spirit of dissent and the fight against injustice that sparked the 1916 Rising. But it also reflects on voices that were silenced in the following 100 years and challenges us to face that past and learn from it…This festival also celebrates the ongoing (r )Evolution in Irish theatre, from its fusion with other art forms, to its exploration of new spaces for theatre, to its concerns with feminism and equality.”

Looking through the programme it is notable how many of the productions cross stylistic boundaries or are in themselves structurally fluid. In Mmm Theatre’s My Poet Dark and Slender, based on a story by Padraic Ó Conaire, ‘movement and text become fragmented, music warps out of tune and lights cast shadow but reveals little’. John Rogers’ P.I.S.C.E.S., a science-fiction show about alien contact, happens simultaneously onstage and online, its content varying from night to night depending on audience interaction and social media. Guerilla Aerial draw on dance, acrobatics, music and improv in Alice M, the company's exploration of 19th century playwright and activist, Alice Milligan. 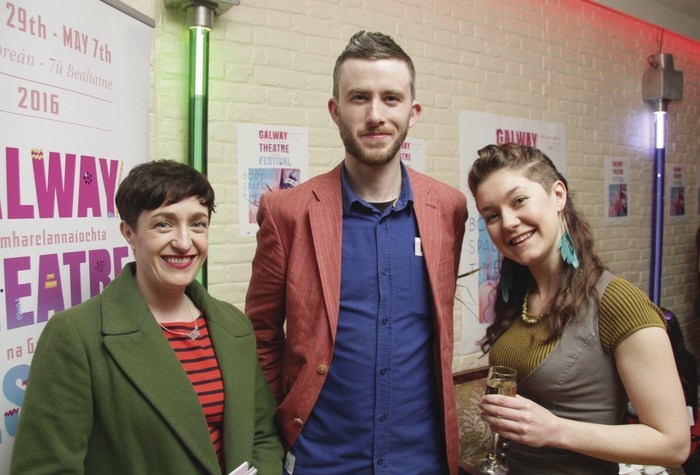 There is certainly no shortage of imagination and innovation on offer in this year’s festivals, facts which were readily acknowledged by Branar Theatre’s artistic director, Marc MacLochlainn who was the guest speaker at the launch.

“There are interactive pieces, visual arts, circus, and there is even some theatre there as well!” he observed, raising a warm laugh from the crowd. “That’s the beauty of Galway Theatre Festival; it stretches what the word theatre could be, what the experience of going to and being part of a live event is and that’s what we need. You can go to see an ordinary show but there also has to be somewhere where experimentation can happen.

"In the foreword it mentions revolution and particularly this year revolution is in the air but it is essential we don’t just talk about it, that we actually do something. Ireland at the moment is in a state of flux, attitudes are changing and it is always the role of the artist to be that person who stands up and reflects back to the group what they are doing and who looks at the world and says ‘hey you can do it this way as well’. Galway Theatre Festival is essential as a place where artists can challenge ideas, it’s a laboratory, a testing zone. It’s where ideas can be planted and evolve, a place where new artists can find their way and cut their teeth.”

MacLochlainn’s words were warmly received by all present and we all can now look forward to seeing the shows themselves in a few short weeks. Full details of the programme can be viewed at galwaytheatrefestival.com